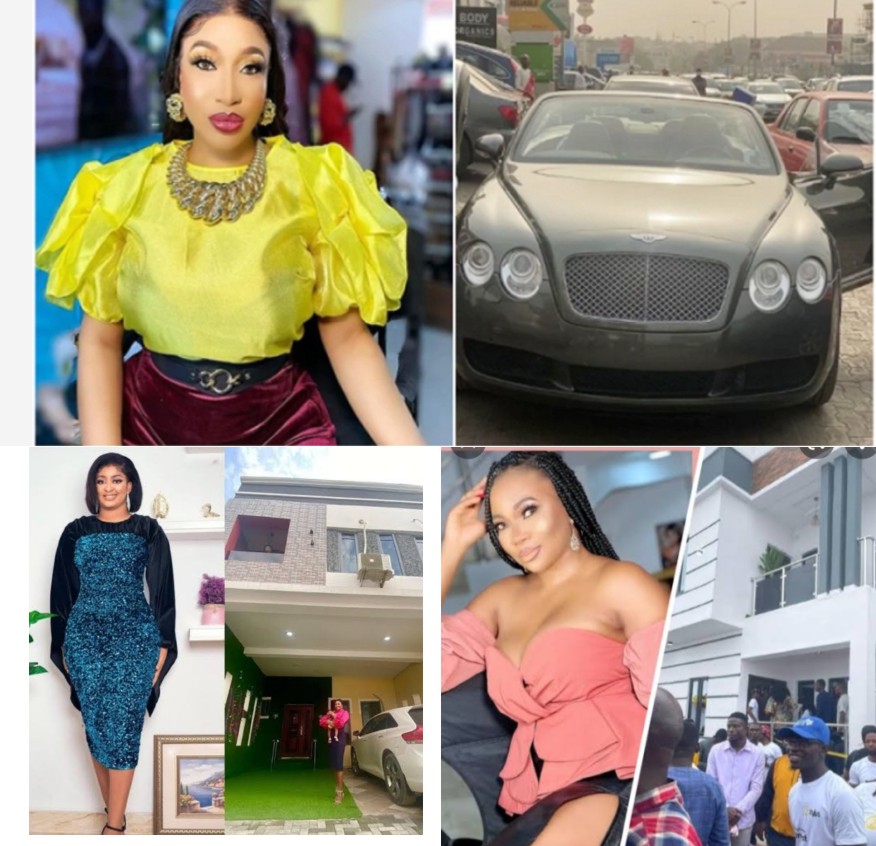 The movie industry is blessed with multi-talented and award-winning actresses who are not only good at interpreting roles in movies but have also made huge successes from their careers.

And they keep lifting their A game in the industry and this has made lots of fans keep asking, “if it’s only females that are making money in the industry”.

The fact still remains that the females are doing exceptionally well and better than a lot of their male contemporaries in the industry. They are also currently dominating the industry and doing well as producers, directors, scriptwriters amongst others.

Lots of the blockbuster movies produced in the industry and currently leading at the box office are produced by women.

Their successes in the industry have also attracted a lot of followers to them on social media, and this made lots of big brands give them mouth-watering endorsements and ambassadorial deals.

In the last 6 months, over 20 movie actresses have acquired exotic cars and luxury houses and this has made lots of people ask questions such as “Where do they get the money from”?

As an actress, they are open to lots of opportunities and deals, like a good number will boldly tell you that being an actress has opened a lot of doors for them, and also connected them to the high and mighty in the society.

So in the real sense, most of these cars and houses come as gifts from their well-wishers in society. Some also work their ass off to acquire most of the houses and cars. Take for example brand ambassadors of a real estate company or car brand.

As part of the payment to the star, the brand might decide to give them a house or land, most especially if they are willing to pay part of the total cost added to what the brand is offering them. Then being a part of the brand already, they also give these celebrities a payment plan that is suitable for them and speed the balance through years for easy payment while they still work as influencers for the brand.

A lot of actresses who can’t afford to make any initial payment added to what the brand is offering most often settle for land and start building gradually. So, it is not in all cases they sleep their way through to acquire all these luxuries.

In the last 6 months, these young and beautiful actresses have been in stiff competition, acquiring luxurious cars and mansions.

Just few days ago, star actress, Destiny Etiko celebrated her 32nd birthday with a mansion, which she tagged on her Instagram post “A gift from me to me! Destiny Etiko remains one of the hottest actresses in the movie industry. And apart from being hardworking and talented, she also invested her money wisely. She has remained producer delight in the Eastern part of the country. She features in blockbuster movies back to back.

Just few months ago, she acquired a Land Cruiser Prado Jeep that made headlines on social media, linking her to a married man who is said to be spoiling her silly with exotic gifts. But she bluntly denied all the allegations and claimed she works for her money and doesn’t have any link with the said married man.

“Dramadoll” as she is fondly called is definitely living her baby girl’s life. Also, Etinosa Idemudia is a popular Nigerian actress, filmmaker and social media influencer. She has featured in a good number of movies and she is also popular for her Instagram short movies. She also became a landlady in Lekki. She shared the picture of her newly acquired mansion on her Instagram page. This mother of one is among the wave-making babes in the industry.

Her Bestie Ebubu Nwagbo shared the video of her newly acquired mansion on Instagram with breathtaking interiors.

Popular actress, Sotayo Sobola popularly known as “Sotee” or “Sotayo Gaga” also joined the landladies league this year. It was revealed that her husband got her a mansion in Banana Island and the house is worth over 870m. She also shared a video where star actress, Eniola Badmus took a tour around the mansion.

Also Yoruba actress, Bukola Adeeyo shared the video of her well-furnished mansion and her colleagues took to Instagram to congratulate the mother of 2. The video shared on Instagram showed every vital part of the mansion, from the sitting room to the bedroom, the dining table, the bar area, closet were all put on display.

Jumoke Odetola’s newly acquired mansion was one of the most celebrated. The talented and hardworking actress also acquired her mansion in July. She took to her social media platform to share the good news with her fans and colleagues.

She remains one of the most sought after actresses in the industry and many believe her latest achievement is as a result of her hard work and determination. She is also currently the brand ambassador of Zylux Real Estate Company.

This is coming few months after she acquired a white Range Rover Sport. It was also revealed that star actress, Anita Joseph acquired a house with her husband by a popular blogger Cutie Juls, though she didn’t make noise about it. She decided to keep her private life and achievements off social media.

Anita remains one of the young talented and very hardworking actresses in the industry. Besides acting, she influences lots of brands and smiles to the bank.

Award-winning actress and philanthropist Tonto Dikeh unknown to many is among the few actresses with lots of achievements this year. This beautiful mother of one acquired two exotic cars in the last few months. She initially acquired a Bentley and as if that was not enough, she later acquired a Maybach.

Many are not surprised with Tonto Dikeh’s achievements lately because she has indeed paid her dues in the industry and just keeps enjoying the fruits of her labour.

Also, popular actress, Sonia Ogiri acquired 3 cars in few months. Though she is a U.S. based Nigerian actress but has remained very relevant in the industry.

Pretty actress, Oluchi Sharon Francis popularly known as “Ugogbe Awka” also got herself a new car, and her friend and colleague Destiny Etiko a.k.a. “Drama Doll” shared it on her Instagram page.

Her colleague Georgina Ibeh took to social media to share the good news on her behalf. According to her “E choke ooo …. super proud of you Boothang, you have worked so hard and deserve a damn good ride to ease off all the stree…Congrats my friendship”.

Popular actress, Nuella Njuigbo also got a Lexus RX 350 SUV gift worth 19 million. The car came in weeks after she split with her husband Tchidi Chikere. Her close friends, Mimi Orjiekwe and Belinda Effah received the new car and Nuella couldn’t contain her joy as her car was delivered.