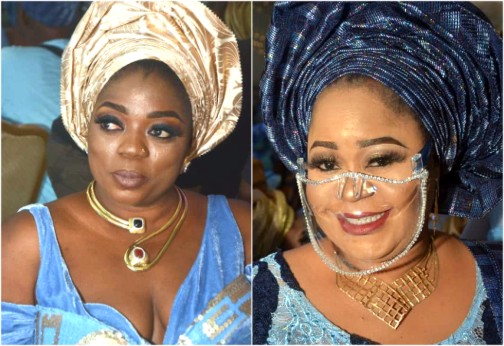 On Sunday, 15th August 2021, Ibadan was agog with a big party that literally shut down the entire city. Practically all the socialites in town converged on Jogor Event Centre (Hall of Grace), along Liberty Road, in Ibadan, as Mojisola Funke & Akinkunmi Olalekan held their wedding party. Akinkunmi is Banke’s blood brother.

It was the party to be on that very day, as a lot of London, US and Naija celebrities stormed Ibadan to honour the couple.

One of the reasons the wedding party was grand was because of the Groom’s sister, Banke Adetoro, the London based celebrity fabric merchant on Liverpool Street in London. Banke & her husband, Akeem are big, both in London & Ibadan. Both are from Ibadan. Both are socialites. Both have a way of lightening up parties, both in London and Ibadan. So, the couple brought many London & US celebrities to Ibadan. No wonder why all the major hotels in Ibadan were fully booked, as over 250 London & U.S celerity ladies stormed Ibadan. And they all stayed the night.

No wonder also why the 3,000 capacity hall at Jogor was fully occupied, with both local and international celebrities. Many came from far and near.

It was also a fashion event, as many celebrity women came stylishly dressed in the 3 major aso-Ebi chosen for the party. There was a general Aso-Ebi, Aso-Ijo and another beautiful fabric worn by close friends of Banke, who flew in from London & the U.S. The London & U.S celebrity women stood out distinctly, looking really beautiful. Akeem & Banke Adetoro also looked beautiful in their outfits. Banke looked gorgeous in her designer dress and Akeem looked dapper in his blue Agbada, cap and designer shoes. She & her husband are fashionistas.

It was a roll call of VVIPs as Senators, House of Reps members, Oyo State politicians and even Lagos celebrities gathered at Jogor to honour Akeem & Banke. Iyaloja General, Yeye Sade Tinubu was there and she danced so well at her table.

Music was by K1 who has now become the busiest musician in Nigeria today. He now plays Back-to-Back. For 7 days last week, K1 performed every day from Lagos to Ijebu to Ibadan. He was at his best at the party as he kept all the society ladies on their feet all through the 7-hour party that went on till 1 am.

All the Big boys were in attendance also. So also all the Ibadan celebrity women like Fashad, Ibadan Fashion Designer, Aramide, (Aramite), Alhaji Bashy’s wife, Alhaji & Alhaja Oloburo, and many more.

At the party was Banke Adetoro’s junior sister Alhaja Tayo, who came with her husband. Both Alhaji & Alhaja Kazeem Raheem 1010 looked beautiful together.

From the US came ever-beautiful, Toyin Aloa, who is very close to Banke. There is also Yinka Lanitade, a U.S. based businesswoman who has been in Nigeria for 5 weeks. She was one of those who helped her friend Banke to organise the party. She is the CEO of LANIS Market and African Store located at 999, Rutland road in Brooklyn. She is also into fabrics. She is the CEO of Lantade Stores. She sells Laces, Ready To Wear Clothes, Earrings and Necklaces/Beads etc.

There is also Adetutu Oshun Badmus, popularly called Tutu Kan, Boston Kan. She looked stunning in her outfit. She has been in town for about 2 weeks and stayed back to attend Banke’s party.

She sat with beautiful Eniola Abiodun, a top society lady based in the US. She lives in Hoffman Estates, Illinois. She looked stunning as usual.

There was also Bolaji Iya Kofoshi. She is Yinka Lanitade’s big sister.

Many of them spent a lot to be in Ibadan for their friend. Apart from the ticket fare, they all bought Aso-Ebi. There is the $1,200 Aso-Ebi from Royalties Exclusive. Some bought 150k Aso-Ebi, whilst others paid 100k.

Men were not left out. Many of the Big Boys paid 140k for 10 yards to enable them sew Agbada, while others paid 50k for another brand of 10 yards.

All the 5-star hotels in Ibadan were fully booked.

READ ALSO: HOW I BECAME OLOTA OF OTTA IN IKOSI-EJIRIN 2 MTHS AGO – OBA ELIAS ADEDAPO IJELU