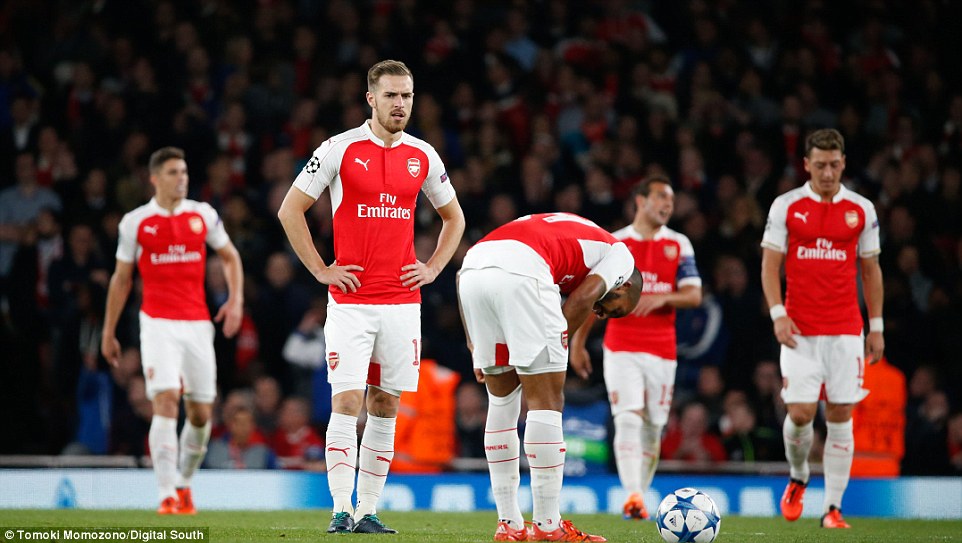 Arsenal have suffered the worst champions league defeat any English team have ever had after losing 5-1 to Bayern Munich in London on Tuesday night.

Ten-man Arsenal were knocked out of the Champions League round of 16 for the seventh successive season following a second-half mauling by the German champions.

A controversial decision in the 53rd minute shattered any hopes of the Gunners becoming the first side in Champions League history to overturn a four-goal deficit, having also lost the first leg at the Allianz Arena 5-1.

They led through Theo Walcott’s wonder-goal in the 20th-minute before Bayern were awarded a penalty that also resulted in the sending off of defender Laurent Koscielny.

The France centre-back was initially shown a yellow card by referee Anastasios Sidiropoulos for his foul on Robert Lewandowski inside the area – but it was upgraded to a red once he decided Koscielny made no attempt to win the ball.

Gunners boss Arsene Wenger looked perplexed by the sudden change of heart by the official.

Lewandowski placed his spot-kick beyond the reach of David Ospina to give Bayern a 6-2 aggregate lead and effectively kill off the tie.

The home side then folded as Bayern scored four goals in 17 minutes. Arjen Robben robbed Alexis Sanchez of the ball and beat Ospina, before Douglas Costa made it 3-1 with a stunning solo goal.

Fellow midfielder Arturo Vidal grabbed a late double, first with an impudent chip before slotting in from Costa’s square pass.

If this was to be Wenger’s final outing in the Champions League with Arsenal then what an embarrassing final act.

Few expected the Gunners to perform a miracle, but they did at least expect to take the fight to the German giants.

Aside from the goal, Walcott also went close when Manuel Neuer saved his effort and Olivier Giroud hit the base of the post with a header.

Walcott was also denied a penalty after it appeared that Xabi Alonso had fouled him.

But Bayern rarely looked stretched and bided their time before punishing an error-strewn second-half display by the home side.