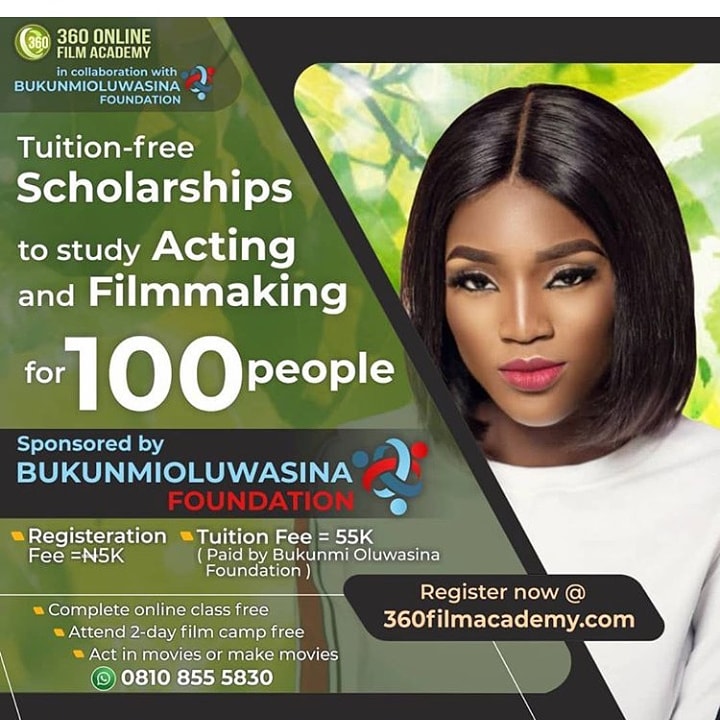 A few days after she walked down the aisle with the love of her heart unannounced, newly married Nollywood star, Bukunmi Oluwasina is set to give out scholarship to 100 Nigerian youths who are aspiring to be professional actors.

The multi-talented actress, announced this through her NGO page on Instagram @bukunmioluwasina_foundatuon a few minutes ago.

According to her, “Bukunmi Oluwasina will be giving out SCHOLARSHIP to 100 People to study and train under @360_filmacademy . Meaning I will be paying the TUITION FEE.(School Fees),(55k) Each for 100 PEOPLE. All you have to do is fill the Scholarship form’s questioner online via www.360filmacademy.com Most of the questions are to clarify your Readiness and also know what aspect of the Theatre you would like to major in at the long run… Either Acting, Cinematography, Script Writing, Makeup, Directing…Etc. If you are lucky to be among the 100, The only thing you would need to pay for is the school’s Registration fee. Which is just 5k. That’s all.
The first phrase which is the THEORETICAL aspect of your classes will be online. After you must have passed some of their Tests and Exams during the learning process, Then you would graduate to the PRACTICAL aspects, which involves (Camping). Meaning you will have to be present for Proper training and practicals about movie making and the rest. This will also open you to the opportunity to be featured in a lot of movies in the process and to work with a lot of well known Actors and theatre practitioners. Who won’t only be there to work with you but also lecture and also shoot some of your movies with you which includes short films, feature length movies and series. If you perform well enough , it would automatically lead to your constant features in subsequent movies. YOU COULD BE THE NEXT BIG THING.
And of course, your final stage would be your GRADUATION and Having your own CERTIFICATE and lot more…

For more inquiries and how to register, call the number on the Artwork or send them a Dm.
Good luck to the 100🥂
@360_filmacademy

Having seeing this, popular entertainment Journalist, Gbolahan Adetayo spoke with the super star who made available to us the below information,”I just feel that’s one of the ways I can support young people’s dream out there. Especially most of my fans who have always being reaching out to me saying they want to be an actor this and that. And most of them are not financially buoyant.

So, I think this is an opportunity to contribute to the growth and education of some of our youths in their choice of career. This is because I have noticed most parents don’t tend to spend money on most children who chooses acting or anything Theater as a career. Some sees it as waste of time and money.

Which can be so frustrating for a lot of this youths. Some of us where just fortunate to have had someone who believed in us and sponsored us in such choice of career. Asides all these, I think it’s time to give back to the society for the love and support and have received from them over the years. Most especially my fans. And I trust 360 film Academy, and believe they will be the right place for them to train because I have worked with some of their crew before and I was impressed”.