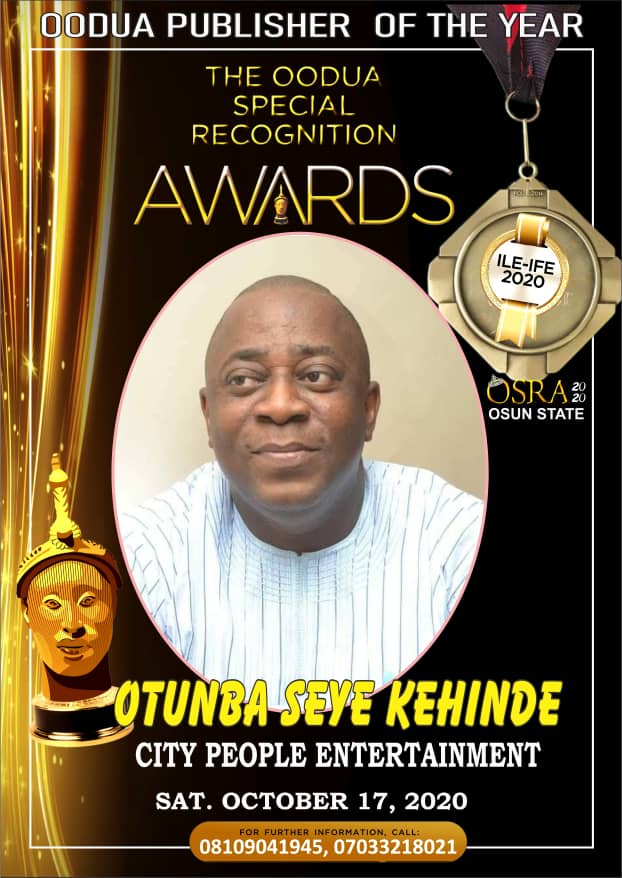 The event will feature awards for the best performing Journalists in the country and award of recognition to appreciate their efforts in the media space this year in the different media organizations.

The Publisher of City People Magazine, Dr Seye Kehinde will receive the Oodua Publisher of the year award due to his excellent performance in the industry, also Segun Lawal Iroko will be given Oodua Photo Journalist of the year.

In a letter sent to NEWSEXTRA by the organisers of OSRA2020, said the awardees were selected after thorough examination and monitoring of their contributions to the media industry in Nigeria.
“Oodua Special Recognition Award is a ceremony put together for the commemoration of personalities whose meritorious services are worthy of recognition. These prestigious and hardworking persons were selected based on public recommendations and a background check would be selected based on public recommendations as well as ensure their selfless contributions. towards promoting the OODUA heritage and states, are celebrated and duly rewarded.

The reward event for selfless efforts has been designed such that it spreads across all walks of life to capture well-deserved persons ranging from politics, banking, social, sports, education, media, entertainment, entrepreneurship, engineering, marine, public service, the youth, among others.

Coming from the stables of intercontinental Magazine, the OSRA 2020 is also themed around espousing the cultural heritage of the South-western States in Nigeria”.

READ ALSO: RAPISTS TO DIE BY HANGING IN KADUNA