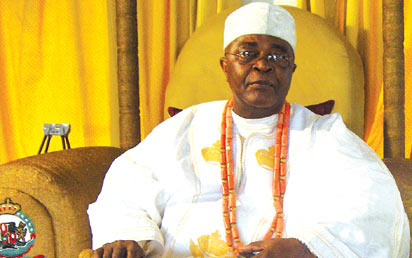 The Alake and Paramount Ruler of Egbaland, Oba Adedotun Gbadebo, has declared that the areas are geographically and historically known as Gbalefa Peninsula; comprising Atan, Iju, Adekoyeni, and surrounding communities as well as Sango, Ijoko and Itori fall within his domain.

Oba Gbadebo said on the strength of that, he would continue to install Obas, Baales and community leaders in those areas as they are within his jurisdictions and not that of the Olota of Ota, Oba Abdulkabir Obalanlege – the traditional leader of the Awori people in Ogun State.

Addressing reporters at his Ake Palace, Abeokuta, Ogun State at the weekend, Alake stated that the Olota or anyone who is not comfortable with this historical and traditional reality should approach the court for redress, instead of resorting to self-help that could lead to violence and other forms of terror.

The Alake, who spoke through the Alake-in-Council, also said the Olota of Ota, Oba Adeyemi Obalanlege and residents of Ota are under his (Alake) prescribed authority.

The Egba monarch, speaking at the news conference through the council comprising the Baagbimo of Egbaland, Chief Akanni Akinwale; the Baapitan, Chief Adebola Lawal; the Bantun, Chief Kehinde Sofenwa, and the Baaroyin, Layi Labode, affirmed that Ota land was a conquered territory by Egbaland in 1917, stressing that Ota and its environs were under the then Egba Native Administration and the Alake.

The Olota, through the Seriki of Ota, Bashorun Olanrewaju, argued that he was the prescribed traditional authority over all lands, towns, and villages with the suffix, Ota, including Sango, Gbalefa and all others.

But, the Alake-in-council at the weekend emphasized that Ota, Sango, Iju, Gbalefa, Abule Lemomu, Oke-Ore, Adekoyeni, Atan among others were part of lands and settlements captured by the Egbas during the war against Ado-Odo in 1843.

He added that between 1853 and 1900, Ota was ruled by the Egbas through their residents’ representatives, which till date made the Olota of Ota a member of the Egba Traditional Council.

The council said despite series of courts’ decisions on issues brought against Alake’s position in all Egba physical and geographical areas, which reconfirmed the legal and traditional jurisdiction of Egbaland on Ota districts, the Olota of Ota and his chiefs resorted to self-help.

“For those who have little or no knowledge about Ota and its environs or district, between 1900 and now, the Ota people were within the prescribed authority of the Alake. For instance, it was Oba Gbadebo I, the Alake, that appointed Oba Aina Ako, the Olota in 1901.

“So, Ota and Gbalefa districts from the early time were all under the then Egba Native Administration and the Alake. Ota historically, administratively and through the right of the conquest of 1841 fell on Egba Administration as part of Egbaland. The Olota of Ota, Oba Adeyemi Obalanlege, is currently an active member of the Egba Traditional Council.

“We are worried that, the Olota and his chiefs have been involving themselves in self-help by engaging in violent visits to Egba towns and villages within Gbalefa, Iju, Atan, Ijoko, Itori, Sango and others,” Alake stated.

The Alake-in-Council also revealed that the Olota and his people have in fact been on a sort of prowl, by laying fallacious claims to Gbalefa Peninsula.

It explained that legally, historically and administratively, the Peninsula, which comprises Atan, Iju, Abule Lemomu, Oke-Ore, Adekoyeni, and others, were never and till date, never been part of Aworiland.

“In actual fact, these areas were conquered from the Egbado people who the Egba accused of colluding with Dahomeans to attack Abeokuta and other parts of Egbaland.

“It is, therefore, ludicrous that Oba Abdukadir Obalanlege and others could in the modern day be going on an expedition to take land that never belonged to his forbears.