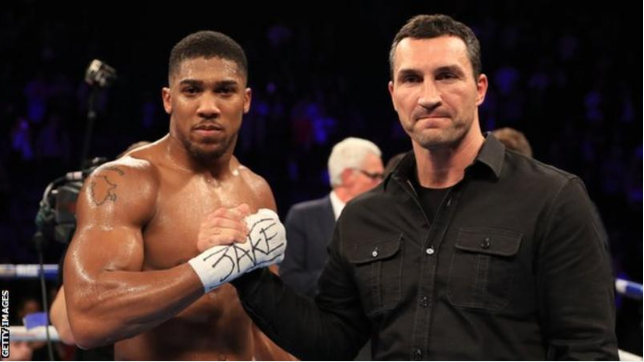 Anthony Joshua is hopeful of landing a rematch with Wladimir Klitschko and taking the fight to the bright lights of Las Vegas, according to The Sun.
Joshua defeated Klitschko in April after climbing off the canvas to stop the Ukrainian in the 11th round in what has been called the most exciting heavyweight fight in recent years.
Joshua says Klitschko still needs some persuading to take the rematch. Speaking to Sky Sports, the British-born  Nigerian fighter said,  “The last fight put the expectations on a pedestal but it was entertainment.
“We can’t fight too many fights like that but regarding who I’m fighting, I’ve got two options.
“One is a rematch with Klitschko, and we’re waiting to see, and we’re trying to dangle a few carrots to make him bite and spark his interest again.
“The man has achieved great things throughout his career so it takes a lot for him to get motivated and interested again.”
Joshua said the second option is to defend his IBF title against mandatory challenger Kubrat Pulev if Klitchsko decides to hang up his gloves.
He added,  “When you have a belt, there’s mandatory positions you have to face and one of them is Kubrat Pulev, a very talented Bulgarian fighter.”
Anthony Joshua Tempts Klitschko with Megabucks for Rematch was last modified: July 3rd, 2017 by Arinze Ago