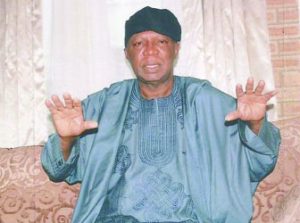 On the 4th of April, 2018, a frontliner politician, successful lawyer, businessman and devoted family man, Chief Ishola Oluwadare Filani who is also a prominent indigene of Ikole Ekiti in Ekiti State died. In his lifetime, Chief Filani, who was a politician and businessman, who had always shown a high sense of responsibility from childhood and always loved his hometown, Ikole Ekiti with passion. His concern for the youth development and empowerment which are on record were unquantifiable which was evident when he was on the board of Directors of Wema Bank Plc where he facilitated employment for numerous qualified Ikole and Ekiti indigenes.

Chief Ishola Filani was also involved in politics for over three decade during which he was mainly involved in party administration. He was one of the party chieftains of the defunct People’s Front of Nigeria (PFN) under the leadership of late Gen. Sheu Musa Yar’Adua before the group later metamorphosed into the Social Democrative Party (SDP).

Everything is set for the burial ceremony which starts tomorrow. The Commendation Service was held on the 26th of June 2018 at Methodist Cathedral of Peace and Excellence, Opebi, Lagos. It was a well-attended event as people came out en-masse to bid farewell to Asiwaju Ishola Filani as recognition of his invaluable, devoted, loyal service to God, his family, Methodist Church Nigeria and the society. Other aspects of the burial arrangements will hold this weekend in Ikole Ekiti, Ekiti State