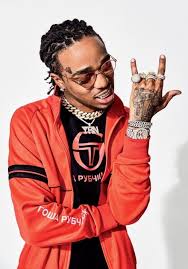 OFFSET is a US rapper and a trailblazer in the world of hip-hop with his group Migos.

Offset, 26, is a US rapper from Lawrenceville, Georgia.

Alongside Takeoff and Quavo he is the third member of the hip-hop group Migos.

He is the cousin of Quavo and Takeoff is Quavo’s uncle.

How many children does Offset have?

Offset is currently married to fellow rapper and reality star Card B.

The couple are expecting their first child.

However Offset also has three children from previous relationships.

He has an eight-year-old son Jordan to Justine Watson who filed a lawsuit against him in 2017 for child support.

He also has three-year-old son Kody with his ex Oriel Jamie who congratulated him on his engagement to Cardi B.

Who is Offset’s finacée Cardi B?

Card B, 25, is a rapper who orginally started out as a stripper.

In 2015, she joined the reality show Love and Hip Hop: New York for two seasons.

Her debut single Bodak Yellow knocked Taylor Swift’s Look What You Made me do off the top chart position in the US.

She has also become the first female rapper in 19 years to reach the number 1 spot on the US Billboard Hot 100.

What are the Migos’ hit songs?

Migos were formed in 2009 and have released three studio albums.

Their number one Billboard hit Bad and Boujee was released in 2016 and features Lil Uzi Vert.

They have also had three other  top ten US hits – Motorsport (with Nicki Minaj and Cardi B), Stir Fry, which peaked at number eight and Walk It, Talk It feat. Drake.