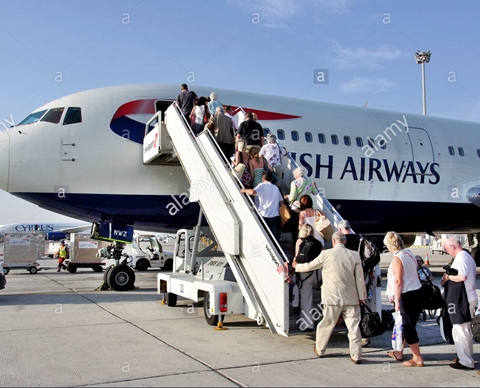 In a statement released on Sunday in Lagos, British Airways has made a juicy offer to customers flying through the from Nigeria to London route.

British Airways has said that customers flying through the Abuja-London route would pay a reduced fare of $277 (N106,368) between May 15 and June 30, for a one-way trip.
Kola Olayinka, British Airways regional commercial manager, West Africa, said this in a statement on Sunday in Lagos.
The statement was made available to NAN by Nosakhare Emma-Iyamu of Quadrant, the communication outfit that handles BA media issues.
Emma-Iyamu told NAN that the minimum airfare for a return ticket from London to Abuja was usually $700 per passenger.
“This promotional offer from BA is to reaffirm our commitment to our loyal and esteemed northern customers,” Emma-Iyamu quoted Olayinka in the statement.
He said that the selling period for the slashed fare is from May 15 and that outbound travel will be from June 1 to June 30.
He said that BA resumed flights to and from the Abuja International Airport on April 20, after the federal government had completed the repairs of the Abuja runway that lasted six weeks.
“BA recognises that the six weeks’ period that the Abuja international airport was closed, was indeed a tough time for their loyal northern customers and the move to compensate them with a slashed fee is coming at a right time.”
Olayinka said that the slashed fare would create an ease for travellers who fly the Abuja-London route, especially, as they planned to manage their travel budgets.
He said that BA was dedicated to providing the first-class experience to their valued customers using the promotion as an incentive.
British Airways Slashes Airfare for Nigeria-London Route was last modified: May 22nd, 2017 by Arinze Ago