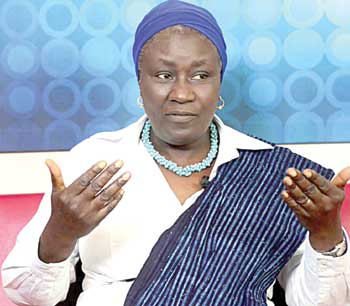 •Reveals Her Plans For 2019 Presidency
Do you remember her? In 2015, she was the only female presidential candidate on the platform of Kowa Party. The big news is that Prof. Remi Sonaiya is contesting again. And on the same platform.

She is determined to make a great impact in the race. She has resolved to galvanise all women to participate in the General elections. And she is very serious about her interest. She believes she would win the presidential election. She told City People this last week. But she readily admitted that Money has a key role to play in the race. She, however, said that if Nigerians saw a credible candidate, they would vote for the person without expecting money. She is banking on her reputation as a brilliant academic with an unstained profile. She is an Ibadan woman married to an Ijebu husband, who is also a University teacher.

The 63 year old Prof was born in Ibadan, the capital of Oyo State. Her father and mother are Ibadan indigenes. Remi Sonaiya was born on March 2nd, 1955. She began her schooling in 1961 at St. Luke’s Demonstration School, Ibadan, from where she proceeded to St. Anne’s School, also in Ibadan, for her secondary education. She obtained a Bachelor of Arts in French from the University of Ife (now Obafemi Awolowo University) in 1977, graduating with the best result in her faculty.

She did her youth service scheme at the Nigeria Military School, Zaria, got married, and proceeded to Cornell University, USA, from where she obtained an M. A. in French Literature. Back in Nigeria, she enrolled for another Master’s degree programme, in Linguistics, which she obtained in 1984, and immediately returned to Cornell University for her PhD studies in Linguistics. She graduated from Cornell in 1988 and returned to continue lecturing in the Department of Foreign Languages of the Obafemi Awolowo University, which she had earlier joined in 1982 as an Assistant Lecturer. She became a professor of French Language and Applied Linguistics in 2001.

Among Remi Sonaiya’s academic and professional distinctions are the following: – Member of the Project Drafting Committee for the Establishment of the Nigeria French Language Village, Badagry; – Member of the executive committees of some of her professional associations and of the editorial boards of several local and international journals;-Conference interpreter since 1989 (including ECOWAS);

first Nigerian to be appointed the Ambassador Scientist of the Alexander von Humboldt Foundation, a position she occupied from 2008 to 2014. Apart from her academic pursuits, she is active in and supports several church and para-church organisations. She has been a Bible study teacher in her church for many years and she’s on the international faculty of Haggai Institute, Hawaii, USA, where she lectures on Stewardship. Remi has always been interested in public affairs and she is passionate about issues of justice, equity, and African development. She is touched by the plight of all who suffer exclusion and other forms of injustice: children, women, the disabled, the poor and the unschooled.

She is concerned that the young people of Nigeria have to bear the brunt of the prevailing culture of corruption and pay for it in mass failure in their educational pursuits, very high levels of unemployment, and feelings of anxiety and hopelessness concerning their future. She, therefore, takes every opportunity for engagement, for example, through the conduct of her “Life Skills” Seminar.

Her interest in public affairs and development issues influenced her decision to retire voluntarily from her position at the Obafemi Awolowo University in 2010 to devote more of her time and resources to those pursuits. She joined KOWA Party and was elected its National Public Relations Officer. She was KOWA Party’s candidate for the 2015 Presidential elections.
She contributes regularly to Nigerian media discourse. For example, she was a blogger for 234 Next until it stopped publishing, and she is currently a columnist with The Niche , a weekly (Sunday) newspaper.

She has published three books on the Nigerian (and African) condition: A Trust to Earn – Reflections on Life and Leadership in Nigeria.
(2010); Igniting Consciousness – Nigeria and Other Riddles (2013); and Daybreak Nigeria – This Nation Must Rise! (2014). Remi Sonaiya is married to Babafunso Sonaiya, a Professor of Animal Science, and they have two grown children and two grandsons. Apart from English and Yoruba, Remi also speaks French and German (as well as some smatterings of Portuguese). She loves to sing, cook, write, and travel. A few weeks back, she revealed to City People’s Publisher, SEYE KEHINDE, why she is running again. Below are excerpts of her interview.

You have come out again to run for the Presidency. What are your thoughts as you go round? What are the things going through your mind?

It’s something I have been thinking about myself too. First, my heart is heavier. In 2015, prior to that, there was a lot of hope for change in the country. That was what the current President was able to ride on, to give people that hope that things would be different.

And his election was met with quite a lot of euphoria, you know about change finally coming to take out the government that was in place then, characterised mostly by cluelessness. We are in a worse position right now. And unlike in 2015, when Buhari was an obvious option for most people, and it was like he was the only one who could do it.

Now, we don’t have that Hope-Candidate, that Change Candidate who we can all say we can rally round. Although, some of us did not rally around Buhari in 2015, but things are a lot worse now. The situation is more dire now. We are in dire-straits and everybody is just hopeful, that somehow we would manage to sort ourselves out, and change things once again. Although, we know that we are not all united. Some people support Buhari for another term. That is why I said my heart is a bit heavier at this time than the last time.

Quote:
“I must be honest enough to say that I had expected that KOWA Party would have been more of a frontline party much more than what we are right now. Several other parties that have come up seem to be causing more of a stir in the system than KOWA party that has been there since 2009”

In your bid for the presidency, how would you deal with the corrupt political system you have to contend with?

If one sits back, to let yourself be overwhelmed by what you see, as the odds that stacked up against you, you won’t do anything. It is not that I am being naive, or not aware of how serious our situation is. People might think haaa, what does she think she is doing? Does she even know how much money is required for this whole thing?

Does she have the means and what not? If you look at the magnitude of the problems you would frighten yourself into silence, and inaction.
Luckily, we have enough lessons from history to draw on, where just one human being realised that things are not the way it should be. It might be difficult for a Martin Luther King Jnr. to take on the entire American system.

It might be difficult for a Nelson Mandela to take on the Apartheid System, but your conviction that you really have no choice. What is happening is unjust, unfair and this is not how things should be and I am willing to try and do something about it.
Of course, the outcome is not in your hands, Mandela never knew he was going to spend 27 years of his life in prison. He was not thinking about that at the beginning. All he was thinking about was this thing is the right thing to do.

What have been the feedbacks you have received from people?
There have been encouraging developments and several reactions. I remember one man I met on the road. He said excuse me ma, I am going to work for you. I am going to campaign for you at this time. All I want this time round is a woman. Others are more reserved. There is not much ebullience on the part of people that they will get change this time round. There is a lot of restraint on the part of the people. Atimes, when they say they are hoping for change, but when they remember the change they voted for the last time, what has come out of it? There isn’t that kind of excitement that we had the last time.

You and KOWA party are synonymous. That was your former platform. What is the state of the party now? How do you plan to galvanise the party itself to show representation across the country.

I must be honest enough to say that I had expected that we would have been more of a frontline party much more than what we are right now. Several other parties that have come up seem to be causing more of a stir in the system than KOWA party that has been there since 2009.

But one thing that I recently realised is that I believe that KOWA is seen, truly as a very different kind of party and not many people, knowing the kind of politics of Nigeria, they are not interested in joining KOWA, because they know now that KOWA is not playing ball like the normal Nigerian political party. It means we are very few in KOWA and very few people are attracted to KOWA Party. We don’t attract those kinds of people who are big and who want to be treated big with plenty of money, and then you treat them specially and do as they please. That is the kind of politics being played in the big parties.

Don’t you think you need to mobilize more people?

Yes, we are mobilising. Unfortunately, I think it is that other kind of politics that people are familiar with and more used to and they desire because the person in those parties who is a low level person today is hoping that he too will get to some position of leadership where he or she would graduate to the big seat. We are keeping on.

We are mobilising and we are trying to the best we can. But I can honestly tell you that we are not getting as much interest as I thought we would get. I thought Nigerians would really want a different kind of political party and say let’s go for it. It seems most people are happy with the prevailing system.