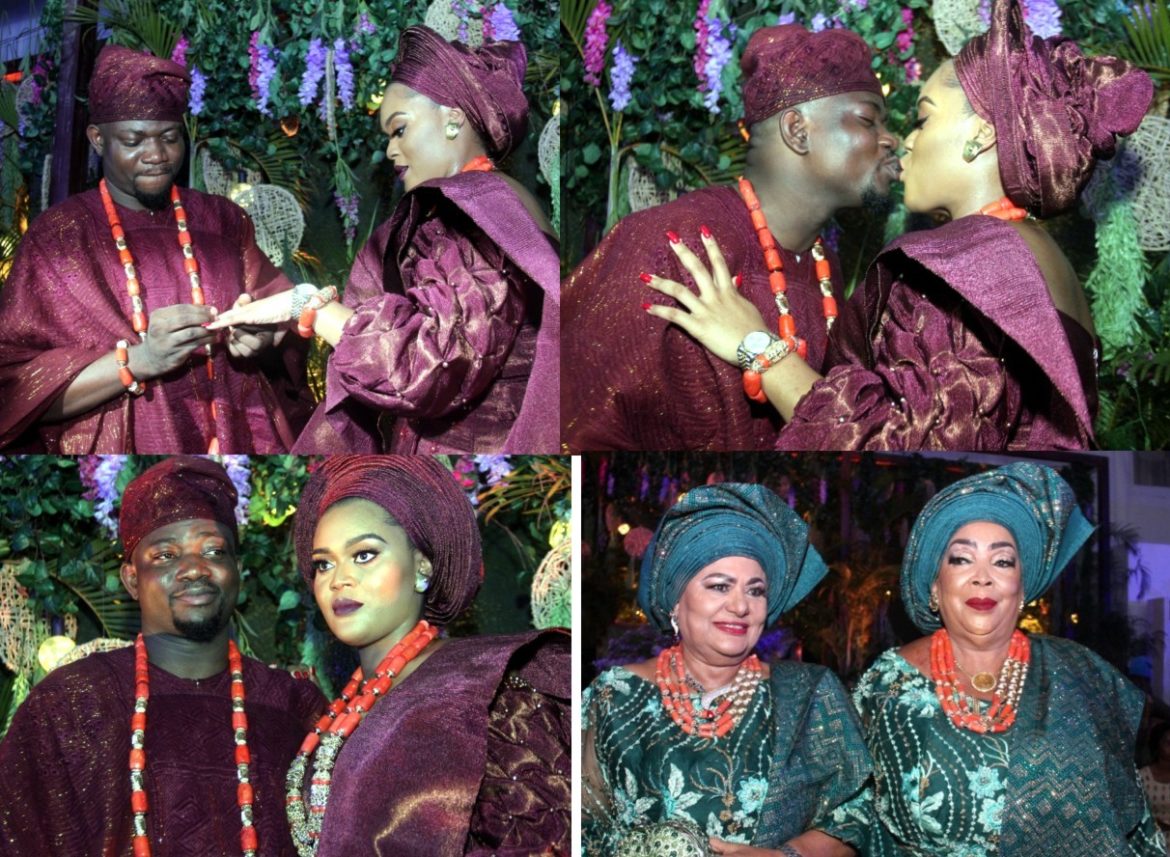 •It Was The Biggest Gathering Of Society Women

The wedding, which was one of the most talked-about celebrity weddings in  April, played host to many Lagos society women of substance. They came out in their numbers to show love to the boss of “Ricciheritage Fabrics“ in Idumota. Not only did over 5,000 society women across South-West rocked the special hand-cut lace fabric specially made by Iyaloja of all Lagos fabric sellers, Alhaja Risikat Kolex, members of inner caucus also bought a special purple Velvet Sequence “Aso-ijo‘‘, which are sold to mothers for the grand reception in the evening.

Eko For Show as it’s always said, Oyinkansola and Abiodun Lawal’s wedding was also an avenue for many of the Lagos, Ogun, Oyo, Osun celebrity women to show off their fashion prowess as many of them spared no cost to look their best. Some, who chose simple iro and buba as their style adorned it with the best of gold and diamond, while some spent much more on the fabric transformation. Yes! Some society women have a way of spending more designing and sewing than the cost of the fabric. It is just a way of showing class at a high octane owambe.

Don‘t forget that no Lagos Society woman wants to be seen as being outdated or left out of the trendy scheme. This is the reason many society women shone like a diamond in the sky at HASHTAG AOll19“ Wedding in Lagos. One pretty babe, who stole the show at her own wedding is Oyinkasola Lawal. This angelic bride walked into the well-decorated hall and her beauty brightened up the hall.  Her expensive perfume fragrance pervaded the air in the hail as she danced in with her beautiful bride’s train. Her off-shoulder Aso-oke from Shadiat Aso-oke revealed a flawless skin that made her husband admired her with awe. It took the traditional “Alaga Ijoko” minutes to convince the Groom that the bride belongs to him as he stood up to catch a glimpse of her beauty.

As many guests were appreciating Oyinkansola beauty in her first attire, she made a second appearance in a cream-gold luxury range lace from Ricciherritage fabrics owned by Alhaja Risikat Kolex, which was transformed by ‘ottonandstincesbymo‘‘. Her unique aso-oke by Bisbod was well wrapped by Segun Onigele.

Those who saw how good-looking the bride was on her day were not surprised when her pretty- aged mum, Alhaja Risikat Odumosu, walked in looking radiant at 72 with her best friend, Mrs Rosemary Osipitan. Both of them stood out in Green aso-ebi which was transformed to fit their body structures. The 2 celebrity friends didn’t only look like bride themselves, they walked with panache as they moved from table to table greeting their large number of guests and also blowing kisses to the guests.

Have you ever seen an APC stalwart, Yeye Kemi Nelson, at events of late? If you haven’t, let’s gist you about how ageless this pretty woman looked at Alhaja Risikat Kolex daughter’s wedding in Lagos. Well, it was her spotless skin that attracted attention at the party as she walked in with Mrs Jibike Babyemi of DHL.

What about Madam Bisi Edioseri? The Ogun popular businesswoman and socialite par excellence stole the show at Alhaja Risikat Kolex daughter‘s wedding. She was one of the early callers, who stepped out, wearing the purple mother’s aso-ebi. Cash Madam as she is fondly called stole show when she stepped out during the engagement, dancing to the traditional beat while the “Alaga praised her to high heavens. Not many know that 82 years old Madam Bisi Edioseri still got her dancing steps intact. She danced for many hours before she took her seat to chat with Iyaloja General, MADAM Tinubu Ojo.

Have you ever heard of a popular Lagos luxury shoe merchant, Mulikat Iyabo Kosoko, and the Ceo of Mulako shoes?  Most of the society women who spotted Oyinkansolas shoes bought their shoes from her. How did we know you may ask? Many of them came to talk to her, showing off their shoes and bags saying, they bought them from her many years ago.

Another society woman, who stole the show at Oyinkansolas’ wedding was Mrs Morufat Shabi and her best friend, Mrs Sekinat Stephens. Mrs Morufat was looking pretty as she walked in a body-fitted floor-length gown, matched with simple diamond accessories. She couldn’t enjoy the party with her friend turns in-law, Otunba Folasade Adesoye because she was out of town on a business trip.

READ ALSO: 6 CELEBRITY WOMEN SHUT DOWN LAGOS IN ONE DAY WITH THEIR HIGH PROFILE PARTIES