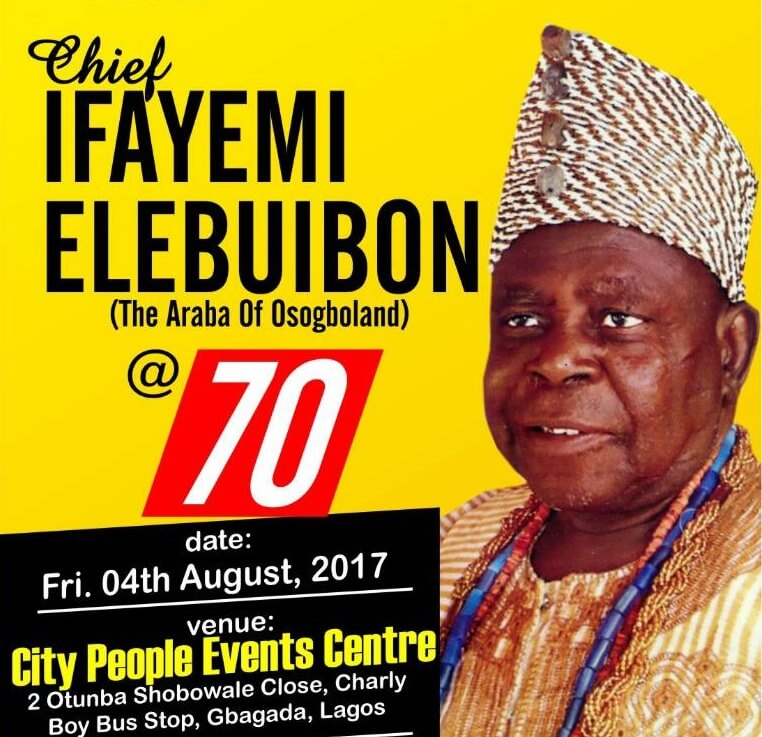 Popular Ifa Priest, Oloye Ifayemi Ayinde Elebuibon, clocked 70 years a few weeks ago and he celebrated it in Osogbo. Last Friday, City People Magazine celebrated this great icon for his legendary contribution to African traditional heritage. It was an all-in-one celebration made up of culture, award and grand reception to honour this 1st Class Ifa priest, whose reputation is global. Elebuibon was celebrated in Osogbo some weeks back, as he holds a very important title of Araba of Osogboland. City People, however, brought him down to Lagos to honour him as well last Friday.

The event, which held on last Friday, August 5th 2017 at the City People Event Centre, Gbagada was well attended by family members and friends of the celebrator. In his welcome address at the event, City People Publisher, Dr Seye Kehinde, highlighted the landmarks of Pa Ifayemi, a great Africanist, a performing artiste, playwright and herbalist, who has hugely contributed to the Yoruba Philosophy and African Religion.

The event was anchored by a delectable lady, Omolara Olaosebikan, who is a top events planner in Lagos. This pretty lady who has planned so many A-Class event was the one who planned the Osogbo birthday for Baba Ifayemi.

Pa Ifayemi, a priest of Orunmila, has the oratory prowess of ifa and other Yoruba deities and has led the old breeds of academics and also provided direction for the incoming Yoruba Philosophers. As the celebration for Pa Ayinde Ifayemi Elebuibon was ongoing, while City People Media Group played host to him and his entire family members to mark his 70th birthday, Nigerians came out en-mass to pour accolades on Baba.