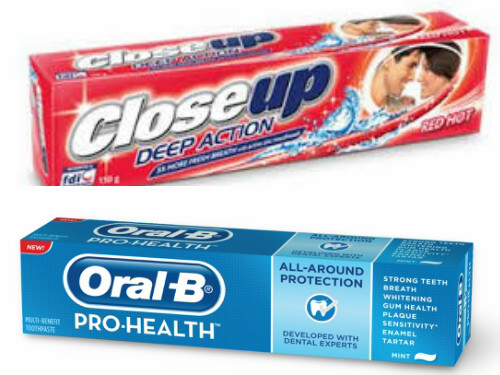 Nigeria has more than 32 toothpaste brands in the market as Oral hygiene has been their top priority over time hence their high patronage for toothpaste. The brands that are prevalent in the market today are the most effective in preventing oral diseases and consumers can find pastes that do much more than just protecting the teeth. There are many kinds of toothpaste, as are their brand names. There are pastes that are natural, and there are others that are not. The following list includes some brands that have been in the market over the years.

A generation of Nigerian children grew up knowing toothpaste as ‘Macleans’. Such was the patronage that made the brand command a generic name then. The brand lost its place, giving room for Close Up to snatch market leadership position. Close Up, a flagship product of Unilever Nigeria became the cash cow of the company and Unilever has supported the brand with an elaborate marketing campaign and social initiatives, which has been able to sustain brand loyalty and love.

In 2015 or thereabout, Dabur Herbal came into the market with the aim of altering the status quo. With an appeal that the paste was made with natural herbs, the brand got a share of the market. It got patronage from consumers, who share the sentiments of African herbs.

Probably, the first tooth paste to go herbal. Actually, it was introduced as one of the first herbal, teeth-whitening chemicals. Dabur combines high-level abrasion with herbal ingredients to effect maximum cleaning. Its abrasive content is very high and may not be suitable for all teeth and gums.

What singles each brand out is the level of marketing creativity deployed to outwit competitors in the market. Toothpaste is essentially the same thing, comparing ingredients in 15 kinds of toothpaste from brands such as Oral-B, Colgate, Macleans, Sensodyne etc. The 13 adult kinds of toothpaste looked at showed little difference in their active ingredients. Even though many products, over time, have since altered their formulations or names slightly, but the same principles apply.

Regrettably, only 33 percent of Nigerians brush twice daily, 46 percent brush once, while 15 percent do not brush, and that was one of the unique campaign methods deployed by some of the brands to warm themselves into the hearts of consumers. In this guise, toothpaste manufacturers have been trapped in a rivalry that has seen them at each other’s throat, across Nigeria.

Vanguard newspaper reported that “According to Philip Kotler, a marketing professor, the challenger should not challenge the leader, but the threat by Oral-B has shown in the last five years that the postulation by Kotler is no longer relevant, particularly where the challenger has the financial muscle, and required finesse to fight the leader. “Dogs now eat the bone hung on their necks.”

The new kid on the block, Oral-B, which was launched into the Nigerian market in 2011, has been riding high the wave, posing a challenge to its older and well-established rivals. The brand is threatening the dominance of the market leader with its just ended promotion that celebrated its fifth anniversary in Nigeria, a promo that saw the brand giving out N70million cash and recharge cards to consumers.

In addition to the consumer promotion, the brand visited various communities in Nigeria to provide free dental checks to people through its Mobile Dental Clinic Programme, which currently reaches more than two million Nigerians annually.

According to the Brand Marketing Director, P&G Nigeria, TolulopeAdedeji, “over the past five years, the brand has sponsored and partnered with government and private institutions to support oral hygiene for an average Nigerian.” In addition, she said, “the brand has also received awards and recognition for quality toothpaste in Nigeria”. Toothpaste brands have similar Unique Selling Points, USP, but what sets them apart is the important strategic and tactical activity they must constantly engage in. Vanguard’s investigations revealed that the gap between Oral-B and other toothpaste brands shows a slim leadership margin, particularly for the leading brand.

Of the 254 respondents interviewed, 90 used Oral-B during and after the promo, Close-Up had 97 respondents, while 67 respondents switched between other brands and Oral-B, depending on which was available for purchase at various points of sale. The survey also showed that within the space of four years, Oral–B has achieved what other brands have built over time. Reason being that it has built affinity with consumers. The respondents, which included marketing researchers, believed that the other brand handlers need to dust up their advertising kits and introduce new campaigns to sustain the creation of top-of-the-mind awareness, just as Oral-B has pushed cavity fights forward to advance its cause. According to them, P&G’s campaign to woo consumers to increase their brushing frequency to twice a day gives the impression that the toothpaste market is saturated.

The prevailing economic situation in Nigeria tends to make an impact on its market forces, and the market is not an exception. In an attempt to ascertain the true reflection of the oral care market, Brands& Products visited some retail outlets at Isolo, Oshodi, Apapa and Ikeja. After engaging some retailers and consumers, it was discovered that there’s an emerging new market trend driven by the current economic realities. Every shop owner interviewed attested to the war of supremacy going on between Oral-B and Close Up, but one seems to be making a superiority statement.

As expected during a recession, consumers would demand value for every kobo spent. And even in the face of brand loyalty, the price at this time determines patronage. A goods retailer, Ajibola Ogundahuns, said both brands were on his shelf in their different sizes and variants because they are the most sought by consumers, but one currently sells more than the other. Ajibola said from his observation, one of the products is losing its share as a result of the price hike. “Close Up is selling very well. Around last year, people began to change to Oral-B. The people producing Oral-B have now raised the price. We now buy Oral-B for N280, and we have to make our profit. I sell it for N300. Some of my friends at Isolo sell it for N320. So people have again started buying Close-Up.

Another retailer popularly called Iya Shadia at Apapa said “before, I used to stock Olive, Pepsodent, Dabur, but now, I only buy Close Up and Oral-B because that is what people demand I still buy Dabur because some people like it, but not in quantity as before. Last year, Oral-B was selling very well. That time, if I bought a pack of Oral-B and Close Up, the Oral-B would finish first. But now that the price has gone up, people have started buying Close Up again.”

What can be deduced from the market is that most users of Oral-B toothpaste shifted from Close Up. Oral-B had snatched a reasonable percentage of market shares from the leader. But owing to its recent price hike, it has lost some of the momentum it garnered recently. But despite the slight set back caused by the price hike, Oral B has continued to support their brands with robust campaigns in the fight for market leadership.

Analysts have, however, revealed that this scenario may trigger a new price war between the two market leaders in the battle for consumer’s patronage. Whichever way it plays out, the consumer may end up the ultimate beneficiary. And this might also be a good time for smaller brands to force their way into the market, depending on the effectiveness of their marketing strategies.

Revealed!!! The voice behind the Union Bank...

How I Set Up The MUDI Fashion...