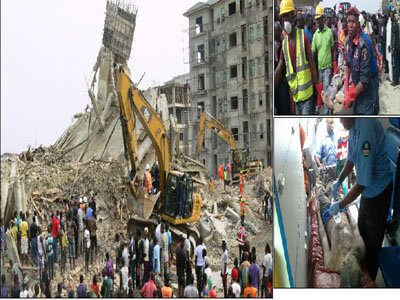 A Lagos High Court in Igbosere on Thursday issued bench warrant for the arrest of a contractor of Lekki Gardens Estate Limited, Mr Sola Olumofe for failing to appear before the court on two consecutive occasions to stand trial in connection with a building collapse in Lekki area of the State on March 10, 2016.

The Lagos State Government had filed criminal charges against the Managing Director of Lekki Gardens, Richard Nyong and five other contractors before Justice Sybil Nwaka over alleged negligence in the events leading to the building collapse which killed 34 persons.

Tragedy had struck on 10 March, 2016 when a five-storey building under construction by Lekki Gardens in Lekki area of the State collapsed and killed 34 people.

The developer was said to have added additional floor to the building against what was approved by government for construction.

At the last adjourned date, Olumofe had failed to appear before the court, while the matter was adjourned to June 1 (today) for arraignment.

Again, when the matter was called, he equally failed to present himself for arraignment, a development which prompted Justice Nwaka to issue bench warrant for his arrest.

The judge specifically ordered that Olumofe be arrested and brought before the court on June 14 for arraignment alongside other defendants.

It would be recalled that Lagos State Governor, Mr Akinwunmi Ambode had expressed a strong commitment to the protection of lives and property of all citizens in the State and the pursuit of justice for all victims of the collapsed building.

The Governor had assured residents that nothing would be left to chance to ensure that cases of criminal negligence and other forms of criminal activities were prosecuted.

20 Book Titles That Will Make You Scream WTF

In My Head: “Those Abusing Me & My Daughter Are Just Full Of Jealousy” – Mercy Aigbe