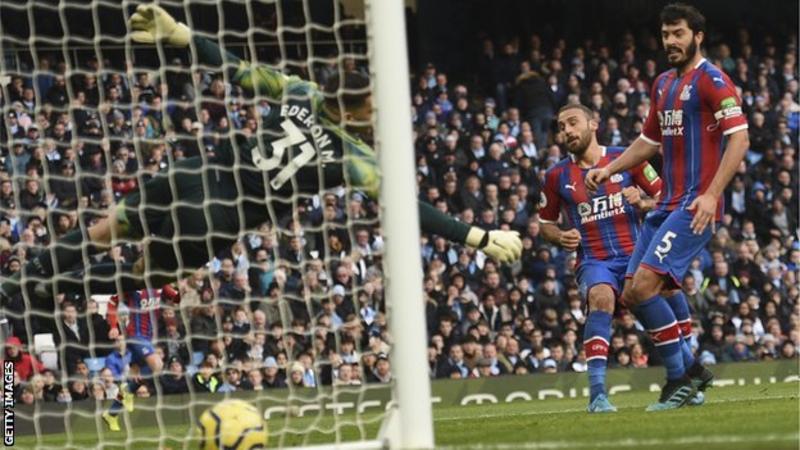 Two Sergio Aguero goals in the last 10 minutes had turned a thrilling game on its head – and looked set to earn City victory – after Cenk Tosun had given the Eagles a first-half lead.

But it was Palace who had the final word when Wilfried Zaha stole down the left and put in a low cross that Fernandinho reached before Connor Wickham, only to divert the ball into his own net.

For long stages, it appeared City would end up empty-handed, as they struggled to break down a brilliantly organised Palace side.

Kevin de Bruyne had fired a first-half free-kick against the underside of the bar with the score at 0-0 but, for all the home side’s possession, they found clear-cut chances hard to come by.

Palace, meanwhile, had hardly ventured forward until they scored and their determined defensive outlook was so entrenched, the City fans booed James McArthur for time-wasting as he walked over to take the corner that led to their first goal.

When the ball did come over, Gary Cahill rose highest at the back post and Tosun was unmarked to steer his knockdown into the corner.

That silenced an already subdued stadium, and there was more frustration to come for the home fans after the break.

They thought their side had been handed a lifeline when referee Graham Scott pointed to the spot for a Jairo Riedewald handball, but the video assistant referee overruled his decision when replays showed the ball came off the defender’s foot first as he blocked Joao Cancelo’s cross.

It took Aguero to lead the rescue mission, with his first goal – his 250th for the club – coming when he turned home a Gabriel Jesus cross, before his second saw him expertly nod home a Benjamin Mendy delivery.

That should have settled the outcome but Zaha had other ideas, making the most of some space down the left and sending in a dangerous delivery that Fernandinho could only help home.