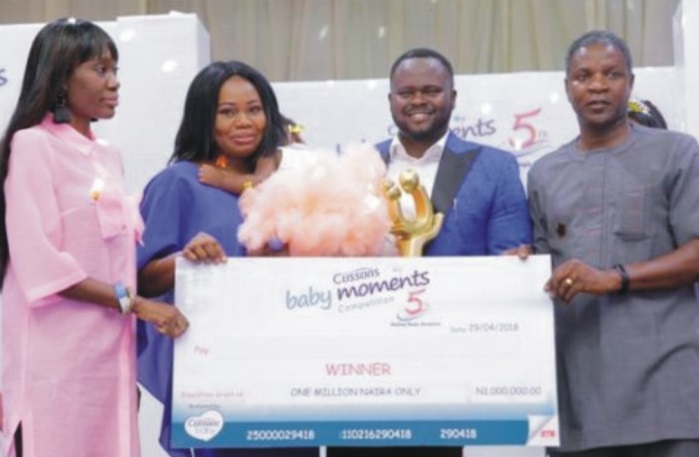 PZ Cussons, makers of Cussons Baby, an international brand with a range of premium baby products, in January announced the kick-off of another season of its annual family competition ‘Cussons Baby Moments’ season 5 as it has been the brand’s usual practice in the last five years.

This year’s edition came with a lot more excitement as Cussons Baby Moments marked its 5th anniversary in grand style. As a way of reinforcing its brand promise ‘Growing Together Naturally’ which in essence is about the emotional confidence that comes from using its trusted baby brand, Cussons Baby Moments (CBM) competition was launched 4 years ago in Nigeria.

It has remained consistent every year, crowning beautiful babies as ‘Baby of the Year’ and rewarding families from thousands of entries, via a system of online voting and judges.

Last year’s edition (CBM4) recorded a huge participation with over 2,700 babies entered into the competition. Participants in this year’s anniversary edition of the competition were guaranteed to enjoy a lot more rewards as the organisers promised up to N5million worth of prizes to be won. To enter into the competition as is the norm, “Interested participants were required to: • Buy any Cussons Baby product. • Take a picture of your baby with the Cussons Baby product • Log on to www.cussonsbabymoments.com.ng to fill in the required details and upload the picture of your baby, and then get loved ones to vote for your baby’s picture once entry is successful and voting begins. Competition was only opened to babies within the ages of 0 – 24 months and entry closed on February 23, 2018.

HOW THE RACE BEGAN

Families registering their babies at these venues were also invited to participate in a special CBM5 Family Challenge; consisting of a series of activities with points allotted. Winners for the regions were rewarded at the end of the day at each location.

In addition, scores alotted across regions were pooled and the emerging national winner was invited to the Baby of the Year Grand Finale to be celebrated and rewarded.

The competition and determination of the final winner is done via a 6-Stage Process involving a combination of Online Voting by the Public and Selection from the Top Voted babies by an Independent Panel of Judges. This selection by the Panel of Judges is in line with the set criteria for selection as determined by the Brand and in full view and guidance by the governing regulatory agency; the Consumer Protection Council (CPC) as well as an Independent Auditor to audit the process for fairness.

The 5th anniversary edition of the Cussons Baby Moments Competition came to a very glamorous close last weekend at the grand finale tagged, ‘The Magic Finale’ held at the Anchor Event Center, Ikeja, Lagos, and Baby Zoe Ekwegh was crowned Cussons Baby of the Year 2018!

It was indeed a record-breaking 5th-anniversary edition, as this year saw over 4,000 participants enter the race to win the prestigious Baby of the Year award. The event which was hosted by popular comedian, singer and actress, Chigul, took place in a tastefully decorated venue that featured a children’s play zone, adult game centres and a beautiful magical themed ambience.

With over 1 million votes received from family, friends and the members of the public during the voting stages and careful assessment by the celebrity judges in each of the Judges’ screening stages, it all came down to the grand finale and the Top 10 finalists. Following tough deliberations by the independent panel of judges, comprising; notable fashion designer, Mai Atafo,Nollywood actress, Mercy Aigbe, and popular photographer, YetundeAyeni-Babaeko; Baby Zoe Ekwegh was crowned the Cussons Baby of the Year 2018 winning 1 million naira educational grant and a year’s supply of Cussons Baby products. This year also saw the introduction of an award statuette for the winner which was carefully designed to represent the bond shared by mother and child, supported by the Cussons baby brand.

Alex Goma, Managing Director of Cussons Baby, had said at the grand finale that the rationale behind the promo was to create fond memories between parents and children. “We appreciate the bond between parents and their children and that is why we feel that this promo will help to strengthen that bond which will in turn create value for the brand,” Goma had said.

CUSSONS Crowns Baby Moment Of The Year Winner was last modified: May 13th, 2018 by Damilare Salami