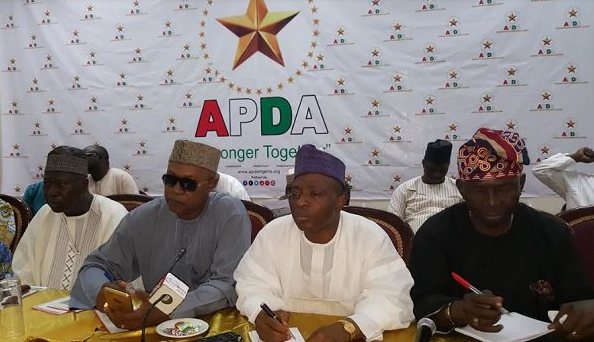 Dan Anyanwu, former chairman of the Labour Party, is also at the occasion which is ongoing at Reiz Continental Hotels in Abuja.

The slogan of the new party is ‘Stronger Toget‎her’, and one Shitu Kabiru is its interim national chairman.

The national executive committee of the party is yet to be constituted.

Dokpesi is the founder of DAAR Communications, owner of African Independent Television (AIT).

Before Monday’s event, there had been speculations that “disgruntled” members of the PDP were planning to establish‎ a new party.

The PDP slid into a crisis after it lost the 2015 presidential election. Some of its members left the party for the All Progressives Congress (APC), and many more have threatened to defect to other parties if Ali Modu Sheriff wins the disputed PDP chairmanship at the supreme court.

Ahmed Makarfi, chairman of the caretaker of the PDP, had distanced himself from APDA.