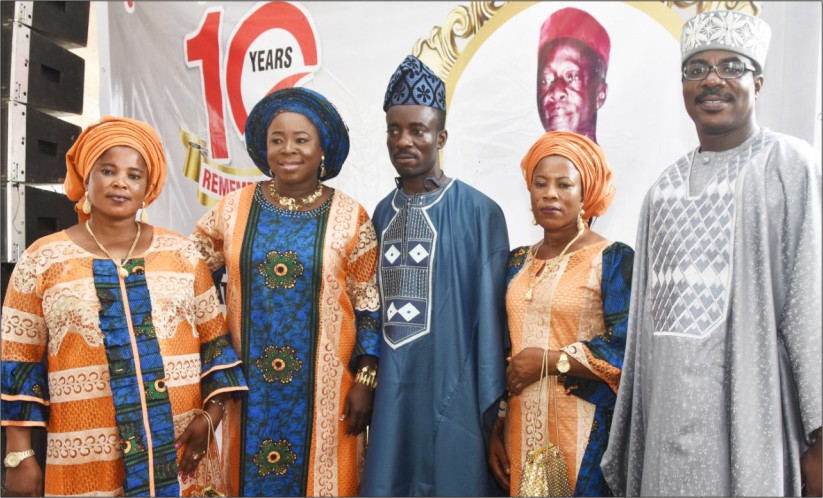 Family friends and loved ones on Sunday, July 18, 2021, gathered at the Odukoya compound beside the Lapa Hotel, Free Trade Zone, Ibeju Lekki to celebrity a life well spent after a decade of demise. It was the 10th year remembrance party held in honour of the late Icon of the C&S Aladura in Ibeju Lekki and the entire Lagos axis, Most Venerable Noah Odugbesan Odukoya popularly known as Baba Ole.

The event was full of life from the beginning to the end as different socialites and celebrity women from different walks of life gathered in memory of a good man. Virtually everyone at the event who had a relationship with Pa Odukoya had something positive to say about him. As heard from most of them, he was a man who had impacted many lives and his legacies still live on.

City People’s DAMILARE SALAMI 08155134152 and the Head of Photography Unit, Femi Adeleke were at the event and in this report, they bring you hot gists as well as beautiful pictures from the action-packed event, enjoy.

The late Most Venerable Noah Odugbesan Odukoya was a very generous man, he is the one many call the true definition of Christianity. In short form, he was a man of God, a man that lived his life on purpose. He doesn’t beat about the bush; he is very straightforward and exemplifies what one can define as goodness in life. His legacies are what his children are trying to carry along now. Pa N.O Odukoya was a father indeed, a man that loves God and loves his people. He’s a father indeed. He was a teacher who touched many lives. He was transferred to many schools in Ibeju Lekki, where he had the opportunity of touching many lives. He produced many professionals and businesses from different walks of life.

Pa N.O. Odukoya was one of the founding fathers of the C&S Church, Aladura in Ibeju Lekki. His name still rings bells among many followers of the church today. He died exactly a decade ago after leaving an exemplary life of sacrifice to God and humanity. He was a renowned preacher who was popularly known as Baba Ole in that axis.

Because of the role Pa Odukoya played in the development of the C&S church in Ibeju Lekki, his compound had the honour of hosting his 10th remembrance service. Members of the C&S Church Aladura in Ibeju Lekki as well as top ministers stormed Pa Odukoya’s compound on Sunday to hold a service in the honour of the late general in God’s vineyard. The thanksgiving service which lasted about two hours had all Baba’s children in attendance as prayers were said and a short exhortation by one of the leaders of the church wrapped up the service.

Elder Francis Odukoya is Baba’s eldest son and first child. At the end of the thanksgiving service, he was required to deliver a speech and he did so excellently. ‘Baba lived a good life, he left values and legacies for us, he earned a good name for himself and that name has been opening doors for us. Baba’s life exemplified true Christianity and today, we are reaping the fruits of his good deed,’ he concluded.

RECEPTION HOLDS AT THE SAME VENUE

The reception of the event also held inside Baba’s compound immediately after the church service. Guests were already seated and were well entertained with cool music and sumptuous meals.

As guests were waiting for the big deal, DJ Haybee, one of the hottest DJs in Ibeju Lekki was on the wheel of steel to thrill guests. Let’s be the first to tell you that DJ Haubee is a great entertainer. The way carried his guests along in his performance completely sold his love out to the people. The guests even requested that he perform longer than scheduled before the live band took over.

Mc Prophessor is a fast-rising anchor, compere and standup comedian. His rib-cracking jokes was a huge selling point for him. Unlike other comperes who would prefer to stick to the stage, Prophessor would from the front of the stage to the back to ensure that all the guests participate in the show. For him, it wasn’t just another remembrance party, it was an evening of excellent showbiz and entertainment.

ESTHER IGBEKELE WAS ON THE BANDSTAND

Anyone who knows popular gospel juju singer and the Duchess of Music would know that she is a bunch of talent and energy. She was on the bandstand and she performed tirelessly for many hours without getting fatigued. She didn’t sing, she equally entertained with some choreographic dance steps with her band boys.

ELDER FRANCIS ODUKOYA AND HIS WIFE HIT THE DANCE FLOOR

The first of Pa N.O Odukoya’s children to be entertained by Esther Igbekele was Elder Francis Odukoya and his wife. He was also joined by some of his friends, one of them was Barr Martins. Members of staff of the Professional Shipping Nigeria Ltd (PSL) were not also left out. They joined the party, danced with their boss and even sprayed him some good cash before he retired to his seat.

One of the big names that stole show at the event was Alhaja Iyabode Hussein popularly known as Ejekarigbo. She is a popular blogger and youtuber. She also runs a popular elderly home in Ibadan, Nigeria. Olori Iyabode Hussein became the life of the party when she mounted the dancefloor with her friends, Did we tell you that she pulled the crowd? Oh, yes she did. Many of the guests at her corner were VIPs and when she mounted the podium, they came through for her.

Funmi Beauty World is a popular name in the beauty and spa industry in Lagos. She runs a very popular beauty store in Lagos. She is a top-notch beautician with very high profiled clients. She is also a very close friend of Olori Iyabode Hussein. Funmi Beauty World stormed the party in style and glamour. Her beautiful white attire and Aso-Ebi gele already sold her out as she entered the venue. She stood out among many other guests. She also became a focal point immediately the singer Esther Igbekele spotted her. She didn’t disappoint when she mounted the dance floor. She was there for a couple of minutes spraying the singer and her friends. To cap it all, she added some glow to the party.

DID YOU NOTICE THE LADIES IN WHITE?

They were the most visible at the event. These ladies in white are Olori Hussein’s gang. They belong to the same social group and they also party together. They all stunned in white lace and royal blue Aso-Ebi Gele. This super gang include Funmi Beauty World, Mrs Olasunmbo Awolola, Alhaja Mutiat Bello, Mrs Deboral Budok-Ale Mrs Olaide Bakare, Alhaji Oshdi and Mrs Adeniyi Dada.

One of Baba’s children that ensured that guests were well catered to and everything went as planned was Mr Caleb Odukoya. He was seen everywhere making sure that things happened. Was he missing from the fun? Far from it. He was also a big part of the party. He stormed the dance floor to spray all his siblings and his wife as well. When it was his turn to dance, his older siblings joined him and they sprayed him so well too.

The event will not be complete if the mention is not made of Mrs Agness Odukoya and Christiana Ojajuni. They both stormed the stage in style and equally pulled the crowd too. Call them the life of the party and you will not be too wrong. They gave a different dimension to the party during their dance.

ORILE BOYS WERE NOT LEFT OUR

Did you know that guys fell in from the Mainland for the Odukoyas? Yes, they did. Orile boys from Surulere were a special breed of dancers and party rockers at the event. They also made a good account of themselves when it came to spending. Esther Igbekele was the beneficiary of their party spending generosity.

SK SPOTTED ON THE STAGE

Rarely would you see easy going City People Publisher, Dr Seye Kehinde mounting the stage to spray at parties but on this occasion, he did. He was spotted spraying and supporting one of his own while she sang-praise him.

DID YOU SEE BABA’S GRANDCHILDREN?

Pa Odukoya is a blessed man even in death. His grandchildren demanded that they would not be left out of the fun. They protested until they were called upstage. They were so many that we even lost count. But then, they danced well and added colour to the event. It wasn’t an all-adult event, the children made it fun too and the Duchess of Music, Esther Igbekele’s energy only matched their vibes.