Actually, he’s only shared his thoughts on one activity as yet because the account is fairly new.

Yesterday, he posted a comprehensive breakdown of his thoughts on the 10th anniversary of the Africa Finance Corporation that he attended. Normally, he’d have just posted as much as Twitter’s 140 character limit would have permitted but now he can share his thoughts with some more depth and context. 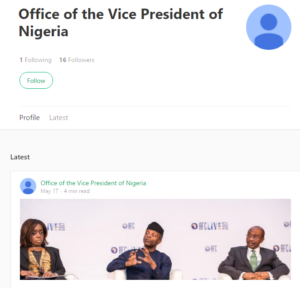 Somewhere between his (sparingly used) Instagram, his Twitter, Facebook and his inactive-but-nonetheless existent website and now this, no one can say they don’t know what’s happening with the Vice President; especially now that he’s “coordinating the activities of the nation”.

There’s no denying that the Digital Communications Office of the Presidency is working overtime to ensure that information is accessible to as many people as possible and also directly from the mouths of the officials too. Like right now, the Minister of Water Resources is hosting a Live Q and A session on Twitter.

And we are so here for that!

ARE YOU FOLLOWING PROFESSOR OSINBAJO ON MEDIUM? was last modified: May 18th, 2017 by Daniji Emmanuel

MOJI OLAIYA: 5 THINGS YOU SHOULD KNOW ABOUT THE LATE ACTRESS

China is building its own version of...

Gender Equality: We Noticed #BoyfriendAllowance In The...