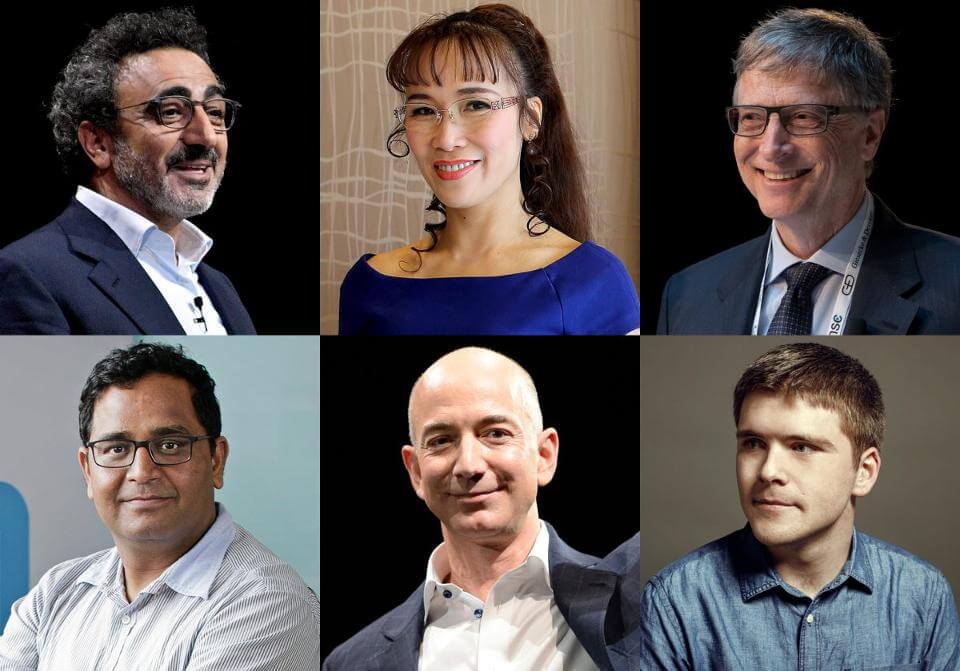 Forbes has released list richest billionaires in the world which have seen Bill Gates retain the number one spot.

It was a record year for the richest people on earth, as the number of billionaires jumped 13% to 2,043 from 1,810 last year, the first time ever that Forbes has pinned down more than 2,000 ten-figure-fortunes. Their total net worth rose by 18% to $7.67 trillion, also a record. The change in the number of billionaires — up 233 since the 2016 list — was the biggest in the 31 years that Forbes has been tracking billionaires globally. Gainers since last year’s list outnumbered losers by more than three to one.
Bill Gates is the number one richest for the fourth year in a row, and the richest person in the world for 18 out of the past 23 years. He has a fortune of $86 billion, up from $75 billion last year. Amazon’s Jeff Bezos had the best year of any person on the planet, adding $27.6 billion to his fortune; now worth $72.8 billion, he moved into the top three in the world for the first time, up from number five a year ago.
Warren Buffett had the second-best year, and the biggest gain since Donald Trump was elected president in November 2016. His $14.8 billion jump in 12 months was enough for him to grab back the number two spot from Amancio Ortega, founder of Spanish clothing chain Zara. Ortega’s fortune was up $4.3 billion since last year, but he still fell to fourth in the world, unable to keep up with the outsize gains of others.
Facebook founder Mark Zuckerberg moved up to number five for the first time after his fortune rose $11.4 billion in 12 months. Meanwhile, Carlos Slim Helu of Mexico, once the world’s richest man, fell to number six, the first time he’s been out of the top five in a dozen years.
There were 195 newcomers. Mainland China had the newest ten-figure fortunes with 76. The U.S. was second with 25. Notable newbies include Patagonia sportswear founder Yvon Chouinard; Viking Cruises founder Torstein Hagen of Norway; U.S. hedge fund tycoon Cliff Asness and two of his partners; and John and Patrick Collison, Irish citizens who cofounded San Francisco-based Stripe, which enables online payments. John Collison, age 26, is now the world’s youngest self-made billionaire, just two months younger than Snapchat’s Evan Spiegel. The Collisons are two of just four self-made billionaires in their 20s (the other two are the Snapchat cofounders). There are 56 billionaires under age 40, down from 66 last year, after some aged out and others dropped below the $1 billion mark.
New Australian billionaire Manny Stul may not be a familiar name yet, but his popular Shopkins, grocery-inspired plastic collectibles with names like Kris P. Lettuce and Posh Pear, are a huge hit with American kids.
There are also 15 new self-made women, all but one of whom are from Asia Pacific. That includes 10 from China and the first ever from Vietnam, Nguyen Thi Phuong Thao, who took her budget airline, VietJet Air, the public in February 2017. The sole American self-made woman newcomer is Thai Lee, who was born in Thailand but moved to the U.S. as a child and now runs tech reseller SHI, reportedly the nation’s largest woman-owned business by sales. Altogether there are 227 women on the list, including 10 who cofounded or own businesses with a spouse or a brother and thus share the fortune.
The U.S. continues to have more billionaires than any other nation, with a record 565, up from 540 a year ago. China is catching up with 319. (Hong Kong has another 67, and Macau 1.) Germany has the third most with 114 and India, with 101, the first time it has had more than 100, is fourth.
Seventy-eight people fell off the list, including 33 from China, 7 Americans and 9 who are still super wealthy but share their wealth among extended family members and therefore are not eligible for these ranks. Additionally, 20 billionaires died in the past year, including Enterprise car rental founder Jack Taylor and Michael Ilitch, who launched Little Caesar’s pizza with his wife, Marian.
Top 10 Billionaires in the World
#1. Bill Gates
#2. Warren Buffett
#3. Jeff Bezos
#4. Amancio Ortega
#5. Mark Zuckerberg
#6. Carlos Slim Helu
#7. Larry Ellison
#8. Charles Koch
#8. David Koch
#10. Michael Bloomberg
Forbes 2017: See List of Top 10 Richest Billionaires in the World was last modified: June 1st, 2017 by Arinze Ago