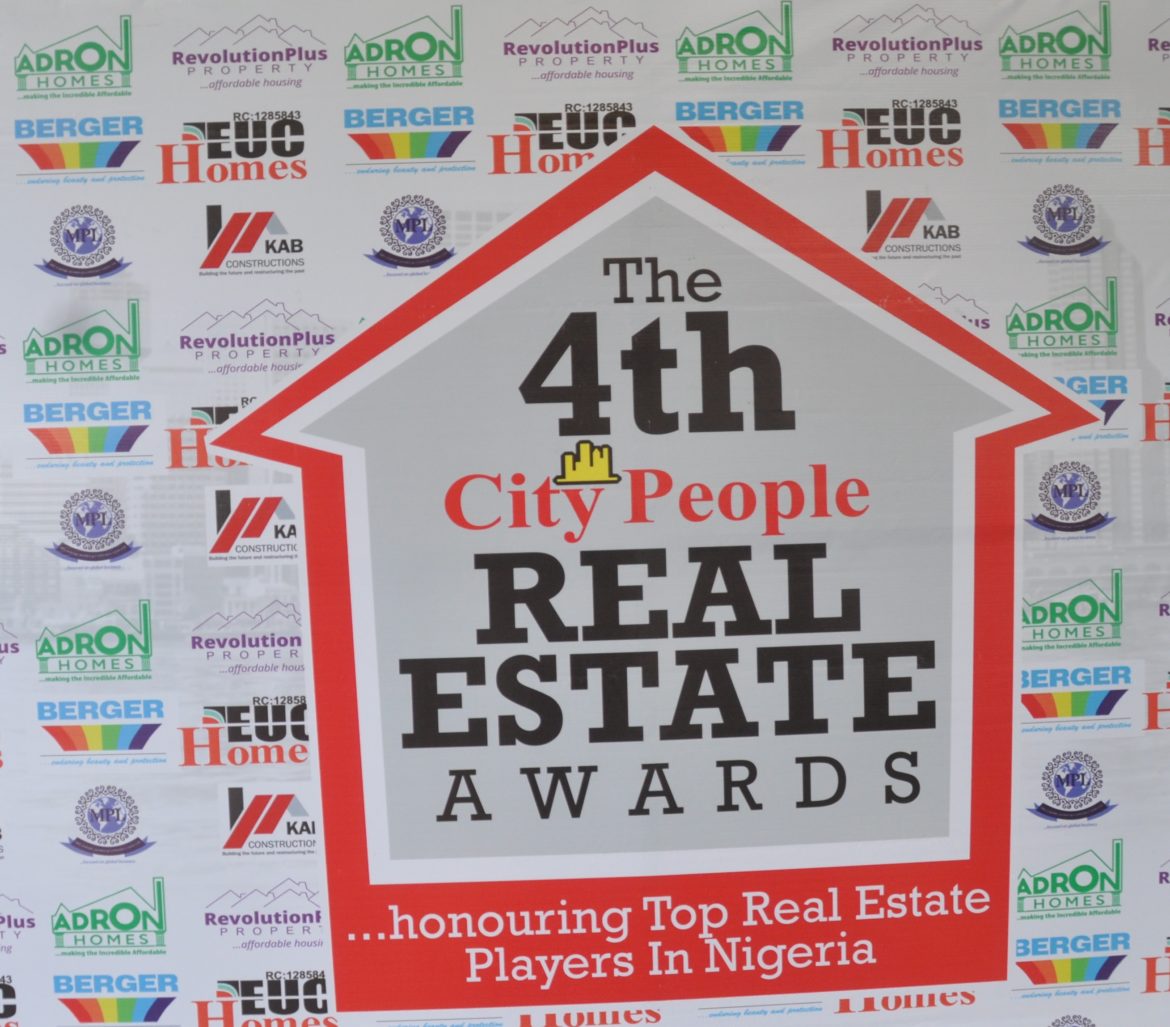 Known for excellence in everything it does, City People Magazine once again proved that it is the master event organizer by thrilling all guests present at its recent 4th Real Estate Awards 2018. Starting with the venue, City People opted for the Lekki Coliseum situated in Lekki phase 1, Lagos, a center not difficult to locate;where beauty and class play big as the crème-de-la-crème of the Nigerian real estate industry trooped-in in their numbers to celebrate excellence, creativity, and world-class feats that culminated the essence of the awards. City People’s Brands & Products Writer, DAMILARE SALAMI was on the ground and he brings you a blow by blow reportage of the event.

Despite being a rainy Sunday, July 1st 2018 was another remarkable day in the real estate sector in Nigeria as the Minister of Power, Works and Housing, Mr Babatunde Fashola, the Governor of Ogun State, Sen. Ibikunle Amosun, the Onibeju of Ibeju land and several other big names were duly represented by huge entourages who filled the Lekki Coliseum to the brim.

At about 3:00 pm, the venue had started gathering momentum for a memorable day as guests and awardees were already filling the seats, while several others were having fun taking pictures and interviews on the red carpet which was manned by the City People TV Crew and Photographers.

It was definitely going to be an evening of fun and dance because fast rising and award winning disk jockey, DJ Kulet fully understood the mood of the audience as she kept many on their feet at intervals, while others moved their bodies even on the seat to the enjoyable scratches and song mixing of this specially talented female DJ.

THE 1ST SET OF AWARDS

The Publisher of City People, Dr. Seye Kehinde opened the floor for the business of the day. He gave the Welcome Speech. The first award deservedly went to the Honorable Minister of Power, Works and Housing, His Excellency, Mr. Babatunde Fashola who was ably represented by the Special Adviser on housing and urban development, Mr. Biodun Oki. BRF as he is fondly called got the award for his innovative national housing scheme of the ministry of works and housing. The next to pick up award was the governor of Ogun State, Sen. Ibikunle Amosun. The plaque was picked on his behalf by the governor’s special adviser and MD, OPIC, Mr. Babajide Olusola and another special adviser to the governor and PS Lands Bureau, Mr. Biyi Samuel.

Berger Paints Nigeria Plc was honoured as The paint company of the year. MD/CEO Mr Peter Felikwe and marketing manager, Funmi Lawal majestically walked to the podium to pick up their plaque. Sterling Bank emerged as the number one it is the most real estate friendly bank of the year.

Prince Kayode Akiolu, son of Lagos royal father, Oba Akiolu was another royal representative who added colour to the event.

The second round of award presentation was done by a crowned Princess and former Regent of Akure-Isolo community; Princess Adebusola Oluwatuyi, whose royal blue regalia spoke volume about beauty, intelligence and the throne.

The Nigeria Institution of Estate Surveyors & Valuers, NIESV members shortly joined the princess after MC Pluto made the announcement for their award.

After a short musical interlude from DJ Kulet who ensured there was never a dull moment, the Special Adviser to Power Works and Housing Minister on housing and urban development, Mr. Biodun Oki soon mounted the stage at the request of the anchors to present the next set of awards to the deserving winners.

First on his list was the face of Osapa London, Prince Kazeem Eletu Odibo whose entrance was grand, as he walked up stage in the company of royalties. At his right hand side amongst several others was Prince Kayode Akiolu while Princess Adebusola Oluwatuyi in the company of several other friends and associates manned his left hand side. Prince Kazeem displayed his concern for humanity as he dedicated the award to the victims of Otedola bridge fire accident. Otunba Yemi Lawal, BOD properties, Oba Rafiu Olusegun Salami, Seagle Properties and Chief Murphy Osuala all came up afterwards to receive their awards.

One would have thought that the presence of DJ Kulet was enough entertainment but Seun Bankole popularly known as SB Live and his crew brought a different feeling of excitement entirely to the show. He practically took the audience to their feet with his blend of all genres of Nigerian music. When the anchors were to take over from him, there was an expression of disappointment on the faces of music lovers present because they felt they have not had enough of him. The anchors had to promise that he would be back again soon to serve them more fun and music.

Handsomely appearing like an angel in an all-white royal apparel, the vice chairman of Oyo State council of Obas, a first class paramount ruler and the Olugbon of OrileIgbon in Oyo State who travelled all the way down to show his love and support for City People Media Group was brought up stage to present another round of awards to winners. First on his list was the real estate couple of the year award which went to the CEO of Revolution Plus, Mr Bamidele Onalaja and his wife who also doubles as the Executive Director of the company, Mrs Tolulope Onalaja.

The presentation was stylish and quite outstanding as the couple was joined by former Super Eagles of Nigeria goalkeeper, Peter Rufai and veteran actor, movie producer and director, SegunArinze.

MC Pluto was carried away by the presence of Nigerian hero, Peter Rufai, making him offer his stage wife, Bukola to the ex-Super Eagles keeper. “I know you can keep anything safe”, he joked. In the company of veteran actor Segun Arinze, both heroes in their fields presented the last round of awards to winners. Mr Edwin Jeffrey of Jeff Properties investment Ltd was immediately followed by the Giselle homes boss, Ms Milicent Duru, a young woman with so much to her name in the real estate industry.

Adron boss, Akile Adetola Emmanuel King was next. He was represented by his Group Executive Secretary Ayodeji Omoniyi, Group Chief Operating Officer, Mrs Folashade Oloruntoba and COO Island branch, Iheoma Azuru. The team shook hands with both Segun Arinze and Peter Rufai and thanked City People for always being the first to recognize and appreciate what they do.

Famously known as Apostle Landlord, Mr Stanley Obi the MD/CEO of Sales Crafts Properties who is in his 30s was one of the youngest people to be honoured at the award. He was full of gratitude and accolades for City People for making him feel special. The last but not the least on the night was Adron Homes for being the most innovative real estate company of the year.

Just before walking into the hall were some real estate companies and service providers were well situated to attract incoming guests as they had their company banners on display. The companies included; EUC Homes, Berger Paints, Revolution Plus, BOD Properties and Covelend.

The event cannot be complete without making mention of the sumptuous meals that were served by Emohjay Cuisines. The team was lead by the CEO herslef, Mrs. Mojisola Ajayi and she came in the company of Ayo Oke, Lanre Akinola, Temidayo Ajayi, Emmanuel Akinseye, Fatoye Olusola, Ajayi Temidayo and Ayomide Ologunde.

A combination of Fried and Jollof rice coupled with well peppered Chicken was the main couse. However, Small Chops with Wines, Bears and Malk drinks had filled the tables earlier on in the show. The small chops was provided by one of the very best in that sector, sumptously yours, owned by Sola Alex-Oni.

By popular demand, singer Seun Bankole aka SB Live and his team returned to stage after the last round of awards had been presented by Peter Rufai and SegunArinze.  He thrilled the guests and everyone danced to satisfaction and the event gradually came to a beautiful end.