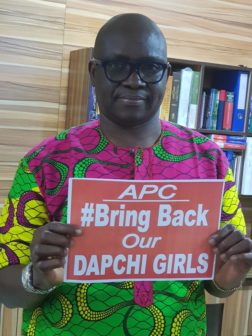 Ekiti State Governor, Ayodele Fayose of has joined the campaign for #Bring Back Dapchi Girls, a group urging the Federal Government to ensure the quick release of schoolgirls abducted by Boko Haram in their school in Yobe last month.

In a tweet on Tuesday, the Ekiti governor carried the #Bring Back Dapchi Girls” placard asking the Buhari administration to bring back the abducted girls.

The governor got an instant reply to his campaign when the Special Adviser to the President on Political Affairs and a gubernatorial contestant in the state, Mr Babafemi Ojudu tweeted: ”Fayose bring back the ones you murdered, Attah of Ayede, World Bank Consultant Dr Ayo Daramola, Mr Omojola of Ifaki.