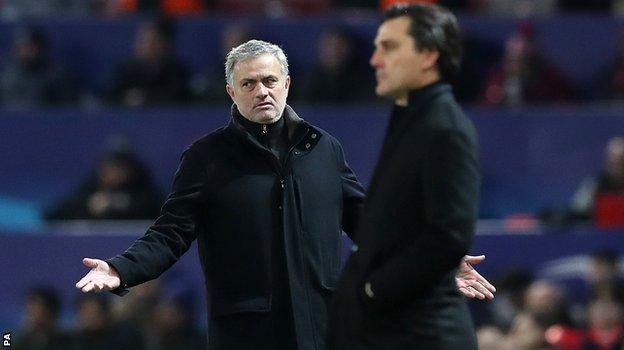 Manchester United boss, Jose Mourinho said being knocked out of the Champions League at home in the last 16 was “nothing new for the club”.

Sevilla substitute Wissam Ben Yedder netted twice for the Spanish side in their 2-1 victory at Old Trafford.

Since losing the 2011 final, United have only reached the quarter-finals once – losing to Bayern Munich in 2014.

“I don’t think the performance was bad,” said boss Mourinho, who lost at the last-16 stage for the fourth time.

Mourinho added: “I don’t have regrets. I did my best, the players did their best. We tried, we lost and that is football.”
“We should have done much better with the quality we have in the team,” said Romelu Lukaku, who grabbed a late consolation goal. “We wanted to go far in the Champions League, that’s what a club like United needs to do”.

When asked about the atmosphere in the dressing room after the game, the Belgium striker told BT Sport that “some players were hiding”.

United were second best in the two matches against the Spanish side and Mourinho was made to pay for his cautious approach as they failed to join rivals Manchester City and Liverpool in the last eight.

The Red Devils have now won just one out of their past nine knockout games in the competitions and have been knocked out at this stage in two of their past three campaigns.

READ ALSO: “IT’S A ONCE IN A LIFETIME OPPORTUNITY” – KOMPANY DREAMS TITLE WIN ON DERBY DAY WITH UNITED