Home News Governor Okorocha To Be Expelled From APC
News 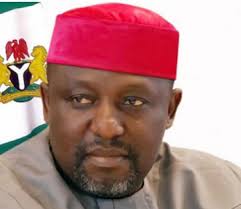 A nine-man Disciplinary Committee of the Imo State All Progressives Congress (APC), yesterday recommended that Imo State Governor, Rochas Okorocha, be expelled from the party for engaging in anti-party activities.

The letter from the disciplinary committee, signed by the chairman Matthew Omeghara and secretary Kevin Ugwu, was made available to newsmen in Owerri.

According to the committee, Okorocha could not appear before the committee and did not put in writing any reasons for his absence.

The letter read in part: “The committee has patiently and painstakingly listened to the overwhelming evidence of Prince Ikechukwu Unegbu, and examined all electronic and media materials tendered and admitted in evidence against His Excellency, Anayo Rochas Okorocha’s anti-party activities and finds as follows:

“That there is overwhelming evidence that is unchallengeable of anti-party activities by His Excellency, Rochas Okorocha. “That His Excellency was openly and brazenly, sponsoring, financing, campaigning for his son-in-law Uche Nwosu, who is the gubernatorial candidate of Action Alliance, AA”

They cited some of the sections of their party’s constitution, that said that the actions of Okorocha contravened article 21 (A) i-vi of APC constitution (October 2014 as amended) punishable under article 21 D (i) (g).

“This is, therefore, the recommendation of the APC, Disciplinary Committee; that His Excellency, Anayo Rochas Okorocha, be expelled.”

On how they arrived at their decision, the APC, Disciplinary Committee said: “The prosecutor called up his petition against His Excellency, Anayo Rochas Okorocha.

The complainant is present while the respondent, His Excellency, Anayo Rochas Okorocha is absent. There is no letter on or on behalf of his Excellency explaining his absence,” it added.

Governor Okorocha To Be Expelled From APC was last modified: January 18th, 2019 by Igbokwe John

I Pick Players Based On Their Penis Size – German Football Coach