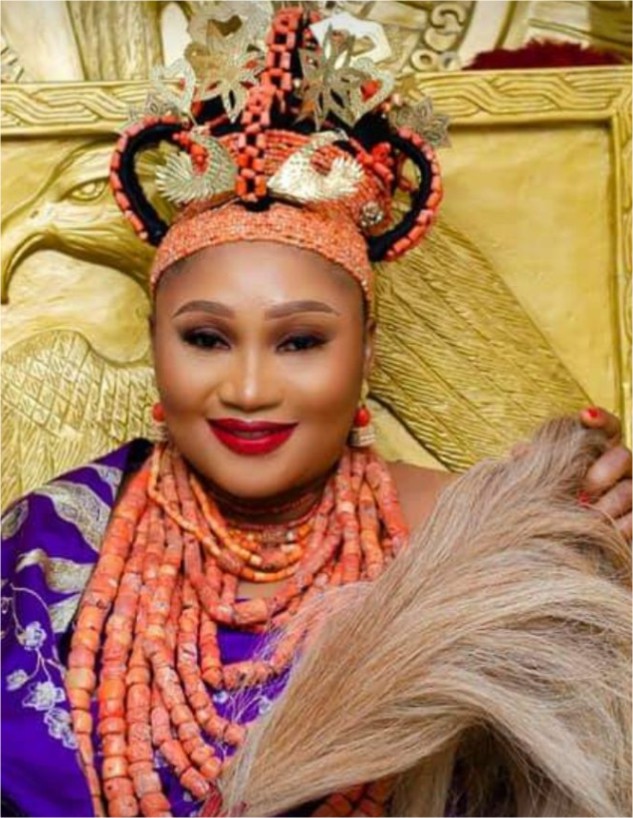 High Chief, Dr. (Mrs.) Nice Aleruchi Toboulayefa Alamieyeseigha, the founder of Nice Esther For All Foundation (NEAFAF) and Nice Esther Alamieyeseigha Rescue Initiatives-(NEARI), is such a lady whose Mother Theresa’s kind of heart is rare. She recently brought all her humanitarian works under one roof. She held a foundation laying-cum-fund-raising ceremony and also celebrated her 40th birthday at her hometown, Isiokpo, in Ikwerre Local Government Area of Rivers State.

City People witnessed the ground-breaking ceremony which took place at Okpirikpi Isiokpo Community on the 11th of September, 2021. The Chairman of the occasion, OCJ Okocha (SAN), a legal luminary, laid the foundation of the project which occupies more than 25 plots in an emerging City of Queen Esther’s Children village.

The foundation-laying ceremony was preceded by a breakfast praise worship led by Genuine Zion Deliverance Ministry which offered a prayer for the celebrant. Thereafter, High Chief Nice visited His Royal Majesty Blessing Wagor, the Traditional Ruler of Isiokpo ancient kingdom. He described the celebrant as a worthy daughter of the kingdom.

This was followed by a fundraising ceremony in which the celebrant solicited financial assistance from the government and members of the public to enhance her charity work.

The birthday girl narrated how she acquired the trait of catering for the less privileged members of the society from her mother, a retired Teacher, Mrs. Ngozi Amadiwochi. Later in the evening, she held a birthday bash at her residence, GRA Phase 3, Port Harcourt.

Some prominent Nigerians sent goodwill messages to the celebrant. They include General Abdulsalam Abubakar, a former Head of State and Commander-In-Chief of the Armed Forces. He wrote: “ I am profoundly happy to see a young female Nigerian doing great for herself and the society. Please accept my heartfelt congratulations on your ground-breaking ceremony of your NGO.”

General Ibrahim Badamosi Babangida also congratulated High Chief Nice Alamieyeseigha.  He wrote “it is a great achievement on your part and that of your organisation, NEFAF and NEARI and the entire people of Nigeria.”

A former Emir of Kano, Alhaji Dr. Sanusi’s goodwill message read.“This moment marks the start of a great stride for the near future for you and NEARI. May the journey be a happy one, filled with peace and harmony, joy and laughter, romance and passion especially for the poor and needy. Lt. General Theophilus Y. Danjuma, on his part, said: “You make me proud. You’re the best, ever. I’m glad to support you. You never fail to deliver victory. Congratulations.”

Femi Otedola, Chief Executive and President, Seaforce Shipping Company Ltd, said: “You’re the world’s greatest. No one could achieve this feat the way you did. I’m so in awe. You nailed it like a champion that you are. Congratulations.”

Otunba Dr. Mike Adenuga, Chairman, Globacom Nigeria said “ I join every well-meaning Nigerian, to confirm that NICE ESTHER FOR ALL FOUNDATIONS (NEFAF), and Nice Esther Alamieyeseigha Rescue Initiative ‘NEARI’ will expand the frontiers of knowledge of selfless service delivery, especially to the less privileged in the society for  sustainable development of our dear country, Nigeria.”

The Princess from Kano Emirate, Hajiya Samira Ali Muhammad, who was present on the occasion, wrote, despite the well-documented positive impact of women and women’s organisations across the nation, progress on women’s participation and leadership in politics and peace, you have added to the feat by this desire to build a city for the hungry and helpless children. This is highly commendable. Congratulations.”

Dr. (Mrs.) Elizabeth Jack Rich Tein, President/Founder, Elizabeth Jack-Rich AID FOUNDATION wrote: “I want to appreciate that you are involved in such a humanitarian service and also to let you know that your commitment towards your goals would eventually unlock so much potential for Nigerian children, especially the hopeless and the motherless among them for whom the City Of Queen Esther’s Village is being built. Success for the vulnerable is invariably success for the whole of society. Congratulations!”

The two-term Secretary to Bayelsa State Government, SSG, Professor Steve Azaiki, OON in an official letter to Dr. Nice A.T Alamieyeseigha said: “The relevance of the charity programmes under the stable of your organisation which have in the past 16 years, touched lives of many orphans, widows, aged and the physically challenged have, indeed, provided succour to many needy persons. As a brother and friend to the late D.S.P Alamieyeseigha family, whom I worked with as Secretary to Government of Bayelsa State, twice, and my endearing relationship with the entire extended family, as well as your marital family, I can recall the philanthropy passion that exuded in you long ago. I am happy that passion has translated into an organized way of helping society.

The visioner herself in her opening speech, admitted: “If I am asked to sum up my life in the past 39 years, I would make bold to say it has been nothing BUT GOD! His Mercies! His Grace! His Assurances. Being humane is a virtue I possess effortlessly, hence the need to run a hospitable Care Home for the orphans downtrodden as well as the destitute. The zeal wouldn’t have been made manifest without you all, for your support either in cash, material gifts, or moral backing! My appreciation is enormously effusive. My special and reverential thanks go to God for His sustenance. Never do I take Him for granted, never will I. In a profound manner, I wish to also thank my ever-supportive hubby, Engineer Godknows Salo Alamieyeseigha! You Are rare! You are kind, I Love You! And also, to my family, just like in the words of Michael J Fox and I quote: “Family isn’t an important thing, it is everything! My family members have been an embellishment of strength towards my passion! Especially my phenomenal and prodigious mother, Lady Ngozi Confidence Amadiwochi, whose act and heart of charity I took after.  Lastly, I’m forever indebted to all my prayer partners, for their intercessions, especially when the devil came lurking, we won!

So, without mincing words, I want to still use this medium to once more say a laudable welcome to everyone, and it is my earnest desire that we keep making our pursuit for humanity an integral part of our lives. Happy official birthday to the Orphanage Home and Happy 40th birthday to me.”