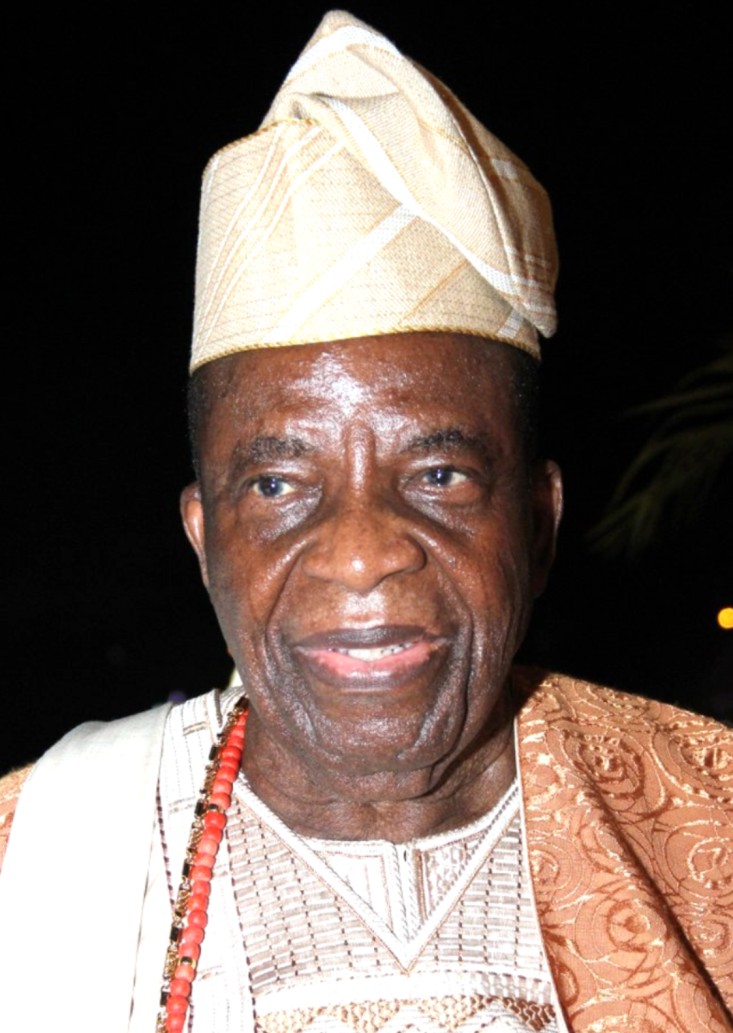 The palatial mansion of Lagos billionaire, Chief Samuel Adedoyin on Wednesday 4th of December   2019 was filled to the brim, as he gathered all the elder statesmen in town to celebrate his 84th  birthday in grand style. The birthday dinner kicked off at 6 pm with a Christian Thanksgiving, while a grand reception followed at his penthouse, inside his Victoria Island, Lagos palatial mansion.  City People’s Assistant Society Editor, ABIOLA ORISILE was at the event to serve you hot gists. Below are excerpts of the report.

Sighting Doyin Group Chairman on his birthday, one will be amazed to see how youthful he looked at 84. Looking so calm and cool, he was fully on the ground to welcome his friends. The celebrant who was clad in a carton colour cream lace matched with a unique designer shoe walked like a Prince that he is.  One could see that he is aging gracefully. Many of his friends couldn’t help but admire him as he moved from table to table. The celebrant who loves to sing many praise and worship songs was the one who declared the event opened at 6 pm with many of his thanksgiving songs.  He sang along with his darling wife, Oluwatoyin and other guests. When City People asked him for the secret of his youthful look, he revealed that it is about doing things in moderation.

The adage Blood is thicker than water may appear as a mere statement to some siblings. But the Okoyas don’t joke with that strong bond they share with one another And this is authoritative. How did we confirm this? Well, Aare Rasak Akanni Okoya, the patriarch of Okoya dynasty doesn’t only share a strong bond with his 2 siblings, Dr Tajudeen Okoya and Alhaja Wosilat Seriki. He loves them to the marrow and never fails to show it when the need arises. Few days ago at the Adedoyin mansion, Aare was seen putting his hand across his brother’s neck and chatting like two young toddlers to the admiration of all. In an exclusive chat with Aare of Lagos, he revealed that people who are close to him know that he doesn’t joke with his siblings. He also said that he has been playing the role of a father to Alhaja Wosilat Okoya at age 4 and Alhaji Tajudeen Okoya at age 8 when he was 25 years old. He also explained that their late Mum, Late Alhaja Idiat Abeke made sure that his siblings were her priority throughout his lifetime.

Have you sighted Elizade Motors at the event and wondered what he has been able to do differently to maintain his youthful look at 82 years?  Chief Ade Ojo who stepped out with his pretty wife, Taiwo looked so young. Not many know that he will turn 82 in the next couple of weeks. When City People magazine chatted with him on the secret of his youthful look, he explained that his younger wife prepares him delicious meals which make him look healthy and younger. He was seen at interval chatting and smiling with his wife throughout the event.

Not many know that Prince Samuel Adedoyin and Ade Ojo have been friends for over 45years and their friendship started when Ade Ojo became his tenant at his Surulere mansion.

Princess Toyin Adedoyin, the pretty wife of the celebrant, Chief Samuel Adedoyin was full of thanks at her husband’s 84th birthday. Spotted in grey Metalic body fitted skirt and blouse matched with gold Turban which matched her flawless skin. She was full of smiles seeing the large turnout of guests despite the short notice. Do you know that Princess Toyin Adedoyin’s father is the late Ibadan billionaire, Chief Oni of Oni and sons?  Mrs Adedoyin who had been married for over 31years is a virtuous woman no doubt. She doesn’t only love her husband, she loves his family as well. It may amaze you that she follows her husband to the car every day and bid him goodbye with a kiss for 31years. She also calls her husband “Papa“ as a sign of respect for him. Not many know that Toyin Tomato as she is fondly called is not a full Nigerian. Her Mum is (White) English (Caucasian)  and that is the reason for her flawless white Mulato skin. She also shares a strong bond with her husband’s children who all rallied round to thank her for being a woman of exemplary character. The major high point of the event was when Mrs Toyin Adedoyin and her husband stepped out to dance to that popular love song “Olomi“. Many of their friends couldn’t help but cheer them on as they love up.

WHY THE ADEDOYIN‘S ADORE TOYIN ADEDOYIN

The pretty wife of Lagos billionaire, Toyin hasn’t only warmed herself into the hearts of many, her immediate household love and adore her as well. This was evident at her husband’s birthday. All her husband’s children were seen chatting with her to see that the events went as planned. One needs not be told that the chemistry between her and her stepchildren is strong as they tease her at intervals.

If you know Mrs Toyin Adedoyin so well enough, you will know that her crowd is so small  Despite being born with a silver spoon she has her class of friends whose friendship she holds so dear and one of the age-long relationships she regards as top is the one she shares with ebony pretty Alake Dare. Their friendship is dated over 30 years ago and still waxing strong. They watch each other’s back so well. The lawyer trained disciplinarian was one of the early callers at the event and spent several hours before she left. The host, Mrs Toyin Adedoyin chatted freely with her and Kemi Aderemi, the daughter-in-law of late Oba of Ife, Oba Sijuade Aderemi and her other friend who is the daughter of Soun of Ogbomosho.

WITH LOVE FROM SAMUEL ADEDOYIN’S CHILDREN

Chief Samuel Adedoyin is blessed with children who are all doing so well in their chosen careers.  They were all out with their better halves to wish their father a happy birthday. Among many sighted were Mrs Yemisi Ogunde, Prince Ayo Adedoyin,  Princess Adenike Adedoyin, Pastor Bimbo-Fola-Alade, and Prince Abiodun, Prince Ademola, to mention few. They all came with their large guests. They later presented Baba Adedoyin with a golden frame of his youthful age which made him burst out laughing throughout.

Funke Adepoju, one of the most sought after Lagos celebrity designers were also sighted at the event. Permit us to tell you that Chief Samuel Adedoyin is the grandfather of Funke.  She runs the popular luxury fashion house in Lekki and Funke is one of the most gentle and humble silver spoon kids you can ever meet. She shares a very strong bond with her grandmother.

It was an array of many top Elders of Redeemed Christian Church Pavilion Parish RPP1, Victoria Island who came in as early as few minutes to 6 pm before the event kicked off. They were led by Rufus Eyitayo while Pastor Folagbade Aboaba prayed for the celebrant. The sermon was by Pastor Peter Egho. There is no doubt that Baba is well-loved in the house of the Lord as they stayed with him throughout.