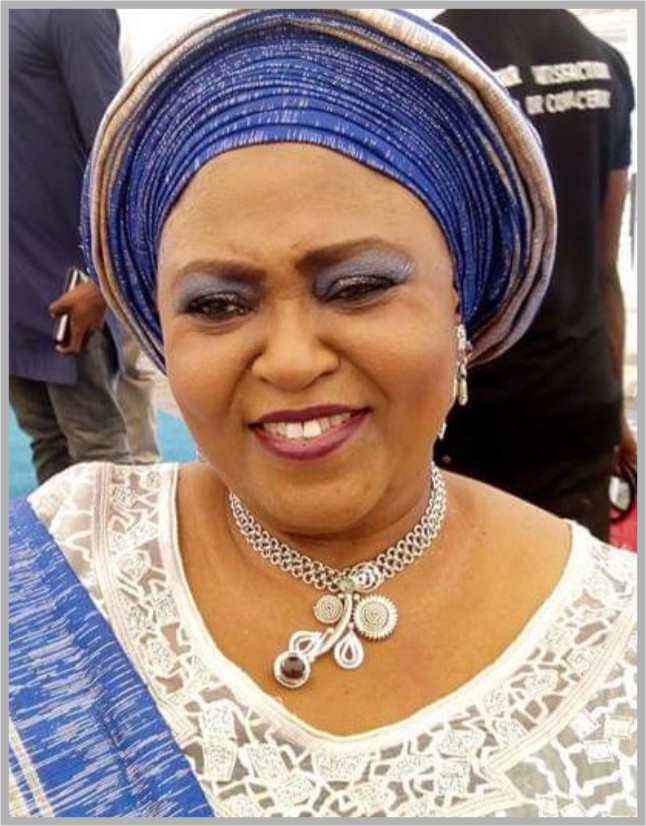 The last weekend of November 2019, precisely Friday 29th and Saturday 30th, was indeed a busy one for the Ibadan social establishment, as it played host to two major events that shook the ancient city to its foundation. Wife of the late garrison commander of Ibadan politics, Alhaji Lamidi Adelabu, Bose gave out her daughter’s hand in marriage. While the prestigious and the first cosmopolitan social club in Africa, Ibadan Recreation Club (1902) as well held a colourful investiture ceremony, where some eminent personalities were honoured as Grand Patron, Patrons, Trustees and Life Membership. The two parties, no doubts, drew the creme de la creme of the society, from far and near, to the ancient city of Ibadan for those two days. Bose Adedibu’s daughter’s wedding took place at the popular Casa Lucio Event Centre, Along British International Tobacco (BAT), Toll-Gate, Ibadan while IRC held its own party within the premises of the Club. City People’s Correspondent, Dare Adeniran captured the two events.

Traditional marriage rites were the first on the program of events for the party where Adesola Oluwakayode and his better half, Moyosore Adebisi (Nee Adedibu) were joined together as tradition demands, to become Mr. & Mrs. Fakolade. The wedding rites were witnessed by both families of the groom and bride as well as their friends and well-wishers. It was so colorful.

Immediately after the traditional wedding, invited guests and top celebrities were hosted to an elaborate reception inside the well decorated Casa Lusio Hall. Even though the venue is a beauty on its own but the exclusive decoration added more colour and beauty to the whole events. Right from the walkway to tables and the VIP section and the beautiful ushers, all looked glamorous. Coupled with the free flow of choice drinks and food, both African and continental dishes. In fact, there was a special Amala supplied by ‘Iya Oyo’. The Juju Gospel maestro, Dr. Yinka Ayefele entertained guests with melodious tunes. It was fun all through, as guests enjoyed themselves and parties till the very late in the night.

The former Deputy Governor of Oyo State, Ambassador Taofeek ARAPAJA was the father of the day for the occasion. In his speech, Arapaja enjoined people to always be good in whatever position they may find themselves, as power is transient and nobody lives forever. He, therefore, advised the couple to love one another wholeheartedly and always use God and love as a foundation and pillars of their marriage. Arapaja is one of the Oyo politicians who graduated from late Adedibu’s ‘Molete School of Politics’ and he remains loyal to the family after the strong politician’s death. It was evident in his speech that he is bittered about some beneficiaries of Molete political empire who have abandoned and backbiting the family after Adedibu’s demise.

Bose Adedibu is a household name in both social and political circles not only in Ibadan but Oyo State and beyond. She is a stakeholder as far as Ibadan social establishment and politics is concerned, and she is always been supportive of her friends or whoever she comes across. So the massive turnout at her party was a kind of payback for her. Apart from her close friends and associates, many other top society women came to the party to support the Yeyelua of Ibadanland. Among top society women sighted at the party include beautiful wife of the late business mogul, Chief M.K.O Abiola, Alhaja Adebisi Abiola; C.E.O of the popular Mauve 21 Event Centre, Alhaja Dupe Muraina; Sheri Olugbode; Chief (Mrs.) Kemi Alao-Akala; Chief (Mrs.) Tina Ogundoyin; Alhaja Amidat Agboola; Funmi Orisadeyi; Chief (Mrs.) Dupe Adeleke; a top textile merchant at the Gbagi market, Alhaja Folashade Arowolo (FASHAD) and many others. They all wore the Green sequence lace Aso-Ebi and rallied round one of their own, Bose Adedibu.

While everybody knows that the bride is an Ibadan proper, it worthy to let our readers know that the groom’s family are from Ekiti, Erinjiyan-Ekiti precisely. They are the family of Elder Babajide Adekunle and Deaconess Mary Olayemi Fakolade.

THE 3 GLADIATORS OF POLITICS MISSED OUT

There is no debate in the fact that the sitting governor of Oyo State, Engr. Seyi Makinde; the senator representing Oyo Central and the Aare Ago Olubadan of Ibadanland, Senator Teslim Folarin and the former governor of the state, Otunba Adebayo Alao-Akala are 3 gladiators in Oyo politics now. That is not the story anyways, the story here is that the trio are some of the VIP guests expected to grace the occasion, but they were nowhere to be found. It is a known fact that the three of them, one way or the other, have connection with the late Adedibu. They have once belonged to the PDP family in Oyo State. But as it stands now, Folarin who is presently in APC and Akala of ADP are close, while Seyi Makinde is sitting governor under PDP.

This development however has raised strong question as whether their absence was deliberate or mere coincidence. But while it wasn’t confirmed why Akala and Folarin were absent, Governor Seyi Makinde, we exclusively gathered, was out of the country that weekend. He was said to be attending some family issue in the far away United States of America.

Though Gov. Makinde as the Leader of PDP in Oyo State couldn’t make it to the party, party loyalists and state’s functionaries were there with, in force. Some of those in attendance include the Deputy Governor, Engr. Rauf Olaniyan; former Deputy Governor of the state, Alhaji Azeem Gbolarunmi; Deputy Chief of Staff, Mr. Olawale Mogbojubola; P.A to Gov. Seyi Makinde, Alhaji Akeem Azeez; Chairman of the State’s Transport Corporation, Mr. Dare Adeleke; Deputy Chairman of Oyo State Pilgrim Welfare Board (Muslim wing) Alhaji Abass Oloko; Hon. Adedeji Stanley Olajide, a Federal Honourable representing Ibadan Southwest/Northwest and a whole lot of others.

ANGELA FOLARIN, A SHOW STOPPER OF ALL TIME

Though Senator Teslim Kolawole Folarin, the senator representing Oyo Central in the country’s Upper Chamber couldn’t make it to the wedding ceremony, but the vacuum was perfectly filled by his beautiful wife, Chief (Mrs.) Angela Folarin. Guess what? For the first time, Angela stormed the party in full Igbo outfit with beaded cap and fly whisk (Irukere) to go with it. This her dress sense stood her out at the party and it was a wow moment for her. Interestingly, Angela is not just a fashionista, but also a beauty queen. She dresses so well and carries herself with respect and dignity. She is also one of the top celebrity women who favourably combine the 3Bs; Bold, Brain and Beauty. Let’s also tell you that Angela is the highest Ibo titleholder in Oyo State, she is the Ada di Igbo Nma of Oyo State. That is in the standard of a high chief of any tribe or state.

Though the duo of Yeyelua Bose Adedibu and Yeye Tina Ogundoyin have other friends in common but there is no doubt in the fact that both are very close. Apart from being friends, they also have many things in common. They are both married to powerful men who are now late; Tina Ogundoyin is married to the Eruwa-born billionaire ADESEUN Ogundoyin while Bose is married to the late political titan, Adedibu. Interestingly too, they are both stakeholders in Oyo PDP today. While Bose Adedibu is a strong woman in PDP and referred to as ‘Mama Gomina’, Tina Ogundoyin is the proud mother of the young Oyo Assembly Speaker, Rt. Hon. Adebo Ogundoyin.

Yeyelua Bose Adedibu is a fulfilled woman in all ramifications; she has seen it all in life, she is married to a powerful politician and has enjoyed and still enjoy every bit of it. But above all, she is blessed with lovely children who are all also doing well with their lives. They were all on their feet to support their sister, Moyo on her wedding day. The Adedibu babes are Teju, a businesswoman and wife of former Senator, Gbenga Babalola; Tola Adedibu, Special Assistant to Governor Seyi Makinde at the Abuja Liaison Office; Mariam who works at the country’s Apex bank, CBN and Moyosore.

ABOUT THE NEW SOCIAL CLIQUE IN IBADAN

Though these men belong to different social clubs in Ibadan but as prominent, influential and rich as they are, they always want to be in the background. They are sociable but not loud neither do they want unnecessary noise around themselves. But it seems they are coming out of their shell lately and kind of forming a small clique, whether consciously or unconsciously. They have been spotted at a couple of events in Ibadan lately. We are talking about President of Ibadan Polo Club, Mr. Femi Akerele; Vice President of Ibadan Recreation Club (1902), Otunba Yomi Olaitan and the Melody Trends boss, Mr. Semiu Adenekan popularly known as D.J SEMITE. Femi Akerele plays big in the Oil & Gas and Property sectors while Otunba Yomi Olaitan runs YOMDEX, rental and event consultant company. Semite is also into events management, stage and lights. The trio was part of the dignitaries that graced Bose Adedibu’s daughter’s wedding.

WHO IS AFRAID OF OLUBADAN

The drama that played out at the party was a strong indication that the end may not have been heard of the face-off between the Olubadan of Ibadanland Oba Saliu Adetunji and some High Chiefs in Olubadan-in-Council. The likes of high chiefs Eddy Foko Oyewole, Lekan Balogun, Amidu Ajibade and co who had earlier arrived the venue left shortly after the entrance of the Olubadan. An Ibadan High Court recently nullified the process that promoted the high chiefs into the position of obas by the immediate past administration in the state.

Among those who bagged IRC’s honour include the executive governor of Oyo State, Engr. Seyi Makinde and his lovely wife, Mrs Tamunominini Makinde as Grand Patron and life member respectively. Others are the Ooni of Ife Oba Adeyeye Enitan Ogunwusi Ojaja 11, Patron; Emir of Ilorin, Alhaji Ibrahim Sulu Gambari, Patron; Dr. Tunde Afolabi, Patron and Asiwaju Yinka Fasuyi also a Patron. While Dr. Babayomi Taiwo, Prof. Olurotimi Tayo and Omooba Goke Oladinni were all decorated as Trustees of the Club