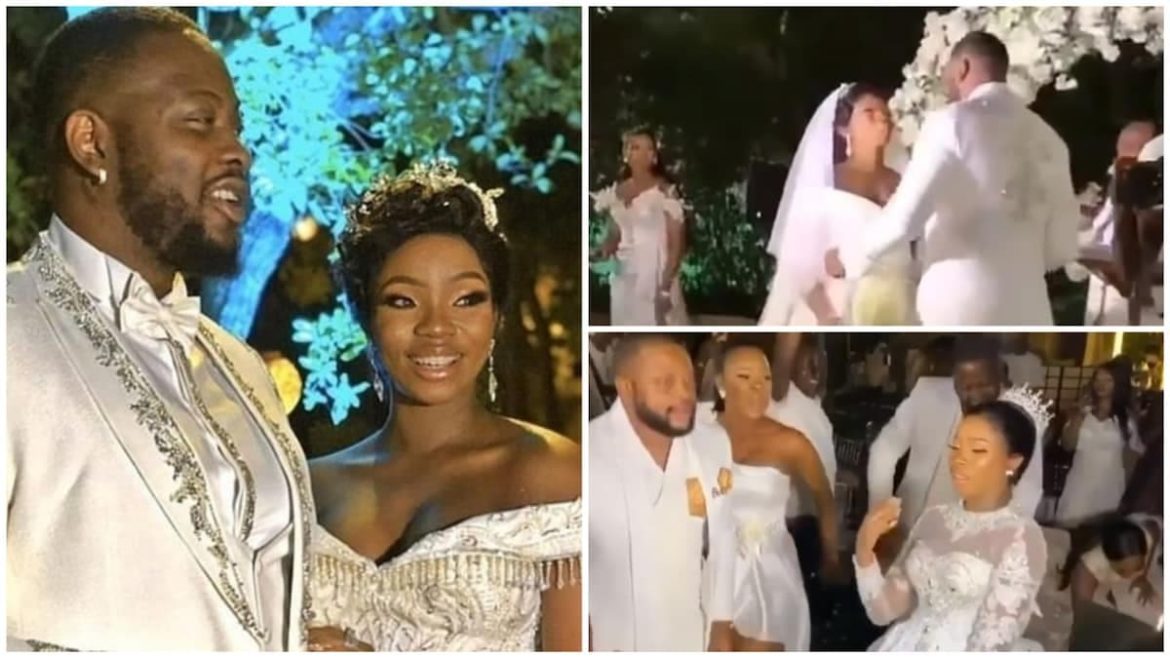 Have you noticed the new trend in town? Have you observed that these days, rich celebs now prefer to take their events outside the shores of Nigeria and have them take place at exquisite locations in choice cities around the world? They are called destination parties and this is the new craze among celebrities. Though it is not new, but in the last 6 months, we have witnessed many destination parties which shut down the host cities.

Before now, the only popular choice location was Dubai and that was where everyone takes their big events to. From the big weddings to the superlative birthday parties, Dubai is the choice location. But in recent times, some celebrities have raised the bar and took the notches higher. Now, rich Nigerians take family and friends to exotic places located in Spain, United States of America, (USA) and Canada etc to make their events more memorable. But beyond making their event memorable, the whole idea is to show class, status and affluence. Destination parties are unbelievably expensive, but a school of thought believe it is cheap because the number of guests is greatly reduced compared to what is spent on locations, Menu, Side attractions, the number of days spent for the short party/vacation, however, make it a bit expensive. We are talking about flight tickets which some celebrator make part arrangements for, hotel accommodation, feeding, which run into millions of dollars. What about all the vendors whom celebrators fly to these choice locations. From music artistes, decorators, event planners, make up artists and all. They do not come cheap. The party industry is considered one of the major contributors to Nigeria’s economy and when Nigerians throw parties abroad, they will surely the host country will know that Nigerians have come to party because of the opulence of the Nigerians party. The industry is credited for creating entire industries that didn’t exist or were previously unprofitable, such as makeup artists and luxury vendor hire companies.

There is no such thing as excess when it comes to Nigerian destination parties. Even in Nigeria, you expect to see an International artiste perform or a car as a souvenir. With ceremonies that cost up to $277,000 and entertain thousands of guests, the multi-million dollar industry has also paved the way for driving industries in entertainment. From makeup artists and fashion designers to specialist sites, the party “services” industry has boomed.

Held away from home, usually in a fancy and luxury atmosphere, destination parties give a holiday wedding vibe. Unsurprisingly, Southern European countries like Italy, and more recently, Santorini in Greece, are also part of the preferred locations. For weddings, the parents will hold the Nigerian traditional wedding, while the couple throws the white wedding which usually holds abroad. A destination wedding is unlikely to accommodate any traditional rites.Overall, the logistics and finances are pretty expensive than your typical Lagos Saturday party. Still lingering in the minds of those who attended the superstar, Davido’s elder brothers wedding in Dubai a few weeks ago, “Superlative”. The groom’s billionaire father, Deji Adeleke shut down the Arab city for 2 day’s.

Many of those who got invited and were able to have access to the venue has had only one thing to say, that this is ‘’the society wedding of the decade’. They are even insinuating that there has been no wedding even in recent times that could match this particular one in terms of sheer extravagance & opulence. The money spent, which is in Dollars: Is in Millions of Dollars. The estimated money of about over 200million naira must have been spent. That’s not anywhere near the kind of money coming in from the thriving steel company and oil company own by the groom’s father daily. The venue would never forget in a hurry as Nigeria & Nigerians were put on the map for another reason entirely. The wedding took place at the Emirate Palace, Dubai a luxury five-star hotel in Abu Dhabi, United Arab Emirates – located on the shores of the Arabian Gulf. All their wedding outfits were strictly from award-winning American designers. The couple rode in customized white Rolls Royce for their wedding. Part of the fanfare of the wedding was a stay at the Vittaveli Jumeirah Resort and monarch beach resort where some pre-wedding photo shoots were taken by an American Photographer, Duke Images. There was also an after-party for all guests on  Dubai Marina Yacht Club where they were treated to another lovely evening. The bride flew in Nigeria’s queen of makeup, Banke Meshida, behind the popular Bmpro brand to beat her face. She was dressed in a Bella dress by Leah da Gloria, an American Bridal designer in New York City, Her second outfit was another expensive dress from a Beverly Hills designer, Ryan and Walter. Coming from Nigeria to the wedding, the couple’s families took the whole shine, especially the couple’s siblings, they had a dedicated private jet which was filled to capacity. Those who couldn’t get on the jets, went by commercial flights and other private jets provided by the groom’s father one out of many.

The latest destination birthday we cannot forget in a hurry which is currently trending on all social media as we speak was Lagos Celeb fashion stylist, Toyin Lawani’s day. She flew many celebrities to Istanbul, Turkey to celebrate her 38th birthday. It was a birthday dinner that took place at  Galata Olympia restaurant followed by an after-party at For Club also in Istanbul. It was an event that paraded over 5 DJs and 4 MCs.

Also, the latest society wedding holding abroad is the grand wedding of the son of Lagos Society woman, Genny Adeosun, which will literally shut down Rio de Janeiro in Brazil on March 20th. Over 200 celeb women are already jostling to be on the VIP list.

On the latest list is the grand wedding of Elizade Motors’ boss, Chief Micheal Adeojo’s son which will take place in Europe, South of France. All the parties will be held at exotic destination sites and we promise to bring you exclusive gists. Stay with City People.

The latest destination party that celebrity big boys and babes are looking forward to is the 50th birthday of hipTV boss, Ayo Animashaun, whose outfit is the brain behind the popular headies award. He is planning to shut down Istanbul, Turkey for 4 days. From the 26th of March to 29th March. The birthday bash will take place at Ciragan Palace, Kempinski which is a 5 star and most exclusive hotel in Istanbul. Guests will also be lodged at Four Seasons at Bosphorus and another tour to a trendy 5-star boutique hotel, W hotel located in Ortakay. There will also be a boat cruise on the Bosphorous sunset Cruise Ona luxurious Yacht. The all-white hemmed party has been a thing of discuss among many big boys and babes as many are jostling to be on the trip which promises to be unforgettable.

Few weeks back too, Lagos society woman, Ngozi Nkoloenyi was in Dubai for 5 days where she had a superlative 60th birthday with her family and close friends. Some of the many celebrities who have also had choice destination parties are popular Singer, Banky W and wife, Adesua. They had their wedding in Dubai. So also is popular TV presenter, Dolapo Oni and her husband, Adegbite Sijuwade, one of the sons of late Ooni of Ife, Oba Okunade Sijuwade, they had theirs also in Dubai. Others who had their parties in Dubai are popular African legend, Tuface and wife, Annie. Star actress, Stephanie Okereke and husband Linus Idahosa had their wedding in faraway France. It was also one of the most superlative destination weddings till date. Popular OAP, Stephanie Coker and husband, Olumide Aderinokun also had their wedding in Dubai.

Known for staging classy shindigs back to back, Senator Daisy Danjuma is not a small fry. Her favourite choice destination to country is Spain. She has played host to countless events there. On this list is the pretty wife of Esama of Benin, Lady Cherry Igbinedion, her choice is London and that was where she held her 65th birthday a few years back. What of the pretty wife of FCMB founder, Otunba Subomi Balogun’s Queen? Olori Abimbola Balogun. She celebrated her 70th birthday in London.

Miss World, Agbani Darego held a private wedding with a son of one of Nigeria’s billionaires and oil magnate, Ishaya TY Danjuma, in Marrakech, Morocco. Queen of Herbal swimmers, Quincy Ayodele had a classy 60th birthday party in Dubai. CEO of Ruff and Tumble, Nike Ogunlesi who married one of the Ogunlesi’s brothers held a classy 50th birthday in Spain. Bigbrother housemates, Bambam and Teddy A recently had their wedding in Dubai. The late Oba Oniru’s daughter, Tolu Oniru and husband, Captain Tunde Demuren, also hold their wedding in Dubai. Ebonylife TV’s boss, Mo Abudu, threw a big party for her daughter in Los Angeles, US. Stylish queen, Nkiru Anumudu, entertained many celebs in Paris for her son’s wedding. Stanbic IBTC founder, Atedo Peterside also flew many guests to Spain for son’s wedding. Oil magnate, Jide Omokore, was also one of the billionaires who literally shut down Dubai for daughter’s wedding.