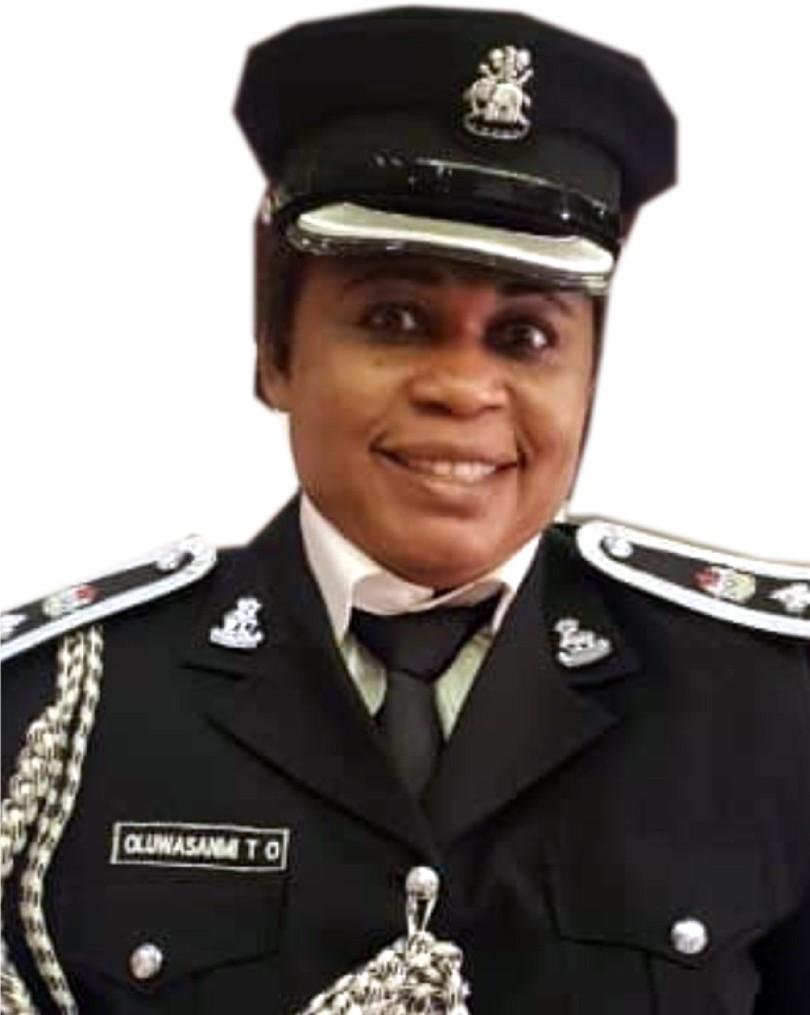 It is no more news that Lagos State Police Command has appointed another female as the new Traffic Officer (MOTOPOL). CSP Titilayo Oriyomi Oluwasanmi, the former Divisional Police Officer (DPO) of Ilasamaja, Lagos State has taken over from CSP Margaret Okonkwo.

CSP Titilayo Oriyomi, while at Lion Building, Area ‘A’ Command, Lagos, oversaw the traffic Section, where she performed exceptionally well in traffic duties. She won several awards on the beat.

As DPO of Ilassamaja, she did exploits in crime fighting. She arrested the kingpins of different cult groups, armed robbery and kidnapping gangs and put many hoodlums behind bars. She brought sanity to her area of jurisdiction.

Her tenacity, and sterling performance as an officer of the law ever since she joined the force till now has always interested the former Lagos State Commissioner of Police, Edgal Imohimi. He once described her as a workaholic. He said he had faith in Oriyomi, who worked with him while he was the Area Commander in charge of Area ‘A’, Lion Building.

In a recent interview with City People Assistant Editor, SUNDAY ADIGUN, CSP Oriyomi, who has resumed duties as the new MOTOPOL pledged to bring her wealth of experience to the traffic section.

How did you feel when you were told you would be the new Traffic Officer (Motopol) for the whole of Lagos?

I felt so good when I was informed. I didn’t even plan to ever come back to Traffic dept, because I was once in Traffic dept. On the Island, during Jonathan era. The experience wasn’t too good, we were always on the road, I hate lies so I always make sure I do my job very well.

So, it came as a shock to me when I was told to return back to Traffic, and I started asking questions. The P.A. to the then CP was the one that called me to tell me that the former person has been removed, and I said, why me? I have never for once shown interest in my colleague position. I started calling all the senior bosses and they encouraged me to take the position. So I had no option than to accept it.

Though it is not a new job to me. I have always been part of traffic, in fact I was given an award then. So I just see it as an avenue to serve again.

At least people will know that I am not only a Crime buster and it is not easy to work in Traffic. You must be a very strong person before you can do traffic. It’s not a lazy man’s work, unless you want to be lazy on your own and start telling Lagosians lies, and I would never be a party to that.

How was life as the former DPO of Ilasamaja?

To God be the glory, because there is nothing you can do without God. I don’t believe in my own strength. I was born and brought up in a Christian home, and I’ve had cause to believe in Christ since when I was a child. I can say the journey so far has been so good; though, it was rough a little. I’ve had cause to work in Alausa division as a Crime Officer. I’ve had cause to work in community policing. We launched community policing in this Lagos. I was the only woman among them. I worked in the community policing for 4½ years and trained men for the job. When I left community policing, I was posted to Lion’s building as a traffic officer, the job I hated most because I’m a Lagosian. I don’t want to stay on the road. I don’t want people to see me. The day I was to resume I cried from my home to Lion’s building, I pleaded for a change, but they refused. I went crying. When I eventually started, I said to myself; “Since you have been given the job, go there and do your best, and I did my best. I was given the best Traffic Officer in the whole federation for 2015.

When they gave me the best officer in December 10th, 2015, a day later, the CP posted me to Ilasamaja division as a DPO. From Divisional Traffic Officer to a Divisional Police Officer. I’m the first woman to work in Ilasamaja division, and I was the most junior out of the DPOs that has ever worked there. By the Grace of God, we recorded many successes. I remember I told all my officers that if you can’t do it my own way then get yourself transferred, but if I catch you collecting money from cultists, I will count you as head of cultists. We started from the expressway. Then in Ilasamaja, if your car has a problem, its trouble; hoodlums will just come from nowhere and hijack your car, all your properties and leave you empty. I told my boys, once you see anybody molesting anyone, shoot the person and give me the corpse, I will give it to the CP. I went to their town hall meeting. I warned them to warn their children, that if I get hold of them, they shouldn’t come and beg me, they were thinking it’s just a joke. And almost on daily basis, you must read about me in the dailies. Ilasamaja was known as an abode of serial rapists, robbers but God gave us victory. I was the one who discovered oil inside well. I was the one who arrested the robbers that robbed Basketmouth, the comedian, I recovered 2 AK47 with 13 live ammunition from them. I made sure I give members of the community my number, that they can call me anytime. Another one was the cultists that started their operation in July. Their leader was arrested in broad daylight on the same day President Buhari came to Lagos. We recovered lots of things from him before we took him to court. After that, the leaders of Eye, Aiye were arrested. What about the girl of 20 years old that was paraded? She confessed to have killed 4 people.

What really inspired you to join the police force and what was the conviction?

I didn’t want to join the force; my uncle forced me because I didn’t like the police. I was born and brought up in Itire. Whenever we are coming from school, I used to see policemen deflating people’s tyres and they would be abusing themselves. My friend and I would be abusing them, not knowing I will also become ‘Ole’ (thief) that I used to call them (laughs). But my Uncle saw it long ago; he knows I believe in justice, and I hate cheating. That was what inspired it.

Tell us about your growing up, how was it like?

I started from the Island. I didn’t grow up with my parents. I’m number 3 in the family of 9. I grew up with my father’s family. Then we were on the Island when they told me my dad said, he would not allow me to grow up on the Island. He now brought me to Mushin.

Thank you! There was this masquerade that used to come out, they called him Agodongbo. There is no time that masquerade will come out and somebody will not die. So whenever the masquerade was coming out they would lock all the children inside, but as for me, they won’t know when I would sneak out and follow Agodongbo. That was how my daddy said I must relocate from Island before I become an “Agbero”.

How do you plan to restore sanity back to the traffic force?

If you look at what has been happening since I took over. I discovered that some of my people don’t come to work early, but when they noticed that 6.00am I am already here then, they had no excuse, they started coming early. They know if I come to your post and I didn’t see you there, you are in trouble. Our people have been coming to work and they are doing their work.

I told them their primary duty is to control traffic, nobody is sending them to go and make arrest. Their duty is to decongest traffic and allow Lagosians to get to where they are going on time. Whenever I am lecturing them, I always tell them that. I have been moving here and there too, I always see them how they use to run up and down whenever they hear motopol is here. I am not lazy. When they see that I am on the road they are equally on the road. When I see that you are not serious I change you from the headquarter, because I will not allow anybody to drag my name in the mud.

With the little samples I have shown them everybody is now on their toes. Then I believe in dressing decently. If I see you without your cap, I will ask you. So they also known me for that, I always love to see my people dress properly and look clean.

One thing is also certain with me; the era of extortion is over. You have to Police with the fear of God. I have made them realised that I will not hesitate to deal with anyone found tarnishing the image of the unit. For now we are good and we are working towards achieving success.

Another Boeing 737 Max Plane Lands Forcefully Due To Engine Problem