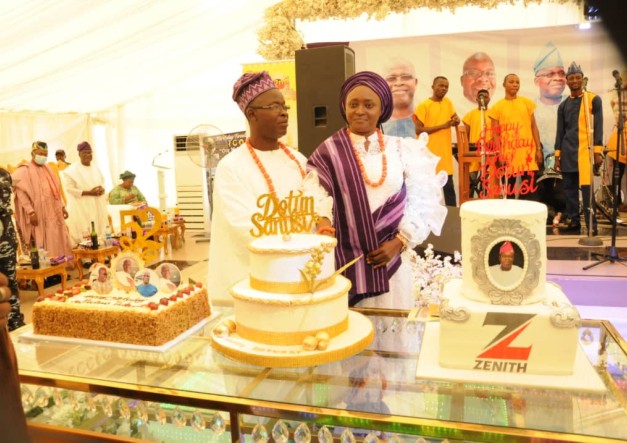 Sanusi, who is the Chairman/CEO Ilaji Hotels & Sports Resorts, Ilaji Farms, Tasaniola Nigeria Limited and ICAST Schools, didn’t spare any cost in making the event a glamorous one. As there was a massive turnout of top celebrities at Ilaji Hotel and Sports Resort, Akanran, Ibadan, venue of the party.

High flying celebrities from all walks of life within and beyond the shores of Nigeria graced the party.

Engr. Dotun Sanusi has every reason to celebrate and thank God for his life. At 52, he is a fulfilled man in all ramifications. He is rich and well connected, yet very simple. He is well loved by all and sundry because of his impeccable character. He is an ‘omoluabi’ personified. He is happily married to an extremely humble woman and their marriage is blessed with lovely children.

The whole arrangements were just on point. The food, drinks, music coupled with the quality of personalities that attended the party, no doubt, made it a classic one. All kinds of choice drinks including champagne, Hennessy, red wine and co flowed like water. It was a party to remember, as big boys, as well as top celebrities partied and enjoyed themselves while the party lasted. Oh! We almost forgot to tell you about the beautifully decorated 2-step birthday cake, which comes in White and Gold.

The best of the best party vendors were engaged for the party. A popular decor company, Bim’s Garden transformed the hall into a small paradise. The likes of Martha’s Kitchen, Ripples Catering Services, MMGS Catering Services and others supplied the sumptuous dishes, both local and continental. Divine Ice handled drinks, while the talented highlife sensation, Wale Zion and a Gospel singer dazzled guests with nice music. The duo of AbdulGaneey AbdulRazaq aka GRA and Funmilayo Ilesanmi coordinated the whole events as MCs.

City People’s Correspondent, Dare AdenirAn was at the star-studded party and brings to you some of the behind the scene gists. You can’t afford to miss the exclusive details of what went down at the party. Enjoy it.

IT WAS A 3-DAY AFFAIR

As expected, Engr. Dotun Sanusi’s 52nd birthday celebration was marked with lots of activities, which lasted for 3 days. On Friday 16 October, 2020, the Yoruba Council of Youths Worldwide honoured the celebrant with ‘Aare Ataiyese Oodua Agbaye’ award. Later in the day, a novelty football match was also played in his honour. While a special Jumat prayers also held later the same day, at Ilaji Mosque. Earlier in the morning of the D-day, which was Saturday however, Engr. Dotun Sanusi was at the palace of Ooni of Ife, Oba Adeyeye Enitan Ogunwusi, his birthday mate, where there was exchange of gifts. Before coming back to Ibadan for his own birthday reception where he hosted family, friends and associates into an elaborate and colourful reception. The following day, Sunday 18th October, there was also a special Thanksgiving Service at Ilaji Chapel, where Onpetu of Jeru Oba Sunday Oladapo gave a brief but soul-lifting sermon.

For those who may be wondering why Engr. Sanusi had to go to Ife in the morning of his birthday, to felicitate with Oba Adveyeye, we can tell you for free that both men are not only birthday mates; they are very close. In fact, when Engr. Sanusi clocked 51 last year, Ooni broke all protocols to be in Ibadan with him. So since then, it has been agreed for them to rotate the visit each year.

Though the executive governor of Oyo State, Engr. Seyi Makinde couldn’t make to the party, probably due to pressing State engagements but he was fully represented. Some of his aides were fully on ground and the list includes S.A to the governor on SDGs, Hon. Kunle Yusuf; the Executive Chairman Of Oyo Mineral Development Agency, Mr. Biodun Oni; Commissioner for Information, Culture and Tourism, Dr. Wasiu Olatunbosun and others. Governor Seyi Makinde is another close friend of Engr. Dotun Sanusi. They have come a long way from their days in Port Harcourt as engineers. They also married from the same zone, Rivers State.

Apart from being well connected, Engr. Dotun Sanusi is also a great promoter of Yoruba culture and traditions and this has endeared him to many traditional rulers. His humility is also another thing working for him not only before the obas but several others as well. No wonder he is always gotten the support of these obas when necessary. His 52nd birthday party wasn’t different. The traditional rulers came in their number. They include the Olubadan of Ibadan land, Oba Saliu Akanmu Adetunji, Aje Ogungunniso 1; Asayin of Iseyin, Oba (Dr.) Abdulganiyu Adekunle Salau; Olugbon of Orile-Igbon, Oba Francis Olusola Alao; the Onpetu of Ijeru, Oba Sunday Oladapo and others.

Have you seen Olubadan come in into events lately? If not, we can tell that the highly respected monarch seems to have changed his style, especially his entourage. Baba, no doubt, dazzled with his powerful entourage at Engr. Sanusi’s party. He was in the company of his lovely wife, media aides (Mr. Adeola Oloko and Mr. Yanju Adegboyega and quite a good number of Mogajis. Among them was Mogaji Jelili Adanla, the Afia Homes and Properties boss; Mogaji Ado; Mogaji Ariori; Mogaji Ori-Aare and several others.

WITH LOVE FROM U.I OLD STUDENTS

In case you don’t know, Engr. Dotun Sanusi is a product of the prestigious Premier University, the University of Ibadan. He is one of the brilliant products of the school representing its image in a very good light in the society. Some of his mates and friends from U.I days were at the party to support their own. They didn’t just come to the party, they were there with their own special catering and drinks. They include Kazeem Adekanmbi; Seye Alabi; Oluseyi Kayode Adedeji aka ‘Amala’, who recently celebrated his 50th birthday (Engr. Dotun Sanusi was at his birthday party too) and others.

OHANEZE INDIGBO WAS NOT LEFT TOO

The presence of the Ohaneze Indigbo at the party didn’t but showed that Engr. Dotun Sanusi cuts across all groups and ethnics. Ohaneze delegation was led to the party by the President of Ohaneze Ndigbo, Oyo State Branch, Dr. Eze Alex Anozie and some of his Titled Chiefs.

Apart from being a philanthropist and an employer of labour, Engr. Sanusi is also a talent hunter. He believes so much in capacity building and youths empowerment. That explains why he has a football academy and many young talents he is mentoring. At the party, there were cultural displays and dance. The Explicit Dance Group gave great accounts of themselves as usual, while local drummers also did their thing. A new culture troupe, Ilaji Cultural Troupe, led by Musibata, was also launched in honour of Engr. Dotun Sanusi.

CCII WAS THERE WITH A POWERFUL DELEGATION

The Central Council of Ibadan Indigenes, CCII was at the party in a full force. The main reason for their support is not far-fetched, Engr. Dotun Sanusi’s contributions to the socia-economic and development of Ibadan generally is highly commendable. That explains why he was recently honoured by the reputable group as the Most Patriotic Ibadan Indigene (MPII). CCII was led to the party by their President-General, Chief Yemi Soladoye. Also in the team were Col. Adenike Akerele (Rtd); Akogun Segun Obe, the Secretary-General; Adedayo Owolabi; Mrs. Abiola Adeniyi; Elder Adelabu Gbadegesin and others. The fatherly role of the former President-General of CCII and the Aare Mayegun of Ibadanland, Chief Bayo Oyero couldn’t be ignored as well. He was the Chairman of the day.

Yet another protocol was broken in honour of Engr. Sanusi, as Police Community Relations Committee (PCRC) decorated him as their Grand Patron at the party. The position, according to PCRC representatives, is exclusively reserved for President or governors but with Sanusi’s contributions to the society and with approval of the IGP and Oyo State Commissioner of Police, the protocol was waved.

Like the popular say, that behind every successful man, there is a woman. In Engr. Sanusi’s case however, it is not only an ordinary woman but a virtuous, accommdating, simple and beautiful woman. She is no other person than Chief (Mrs.) Joyce Bellema Sanusi, the wife of Engr. Dotun Sanusi. She is also a God-fearing and a Deaconess. No wonder she appeared so simple but yet beautiful at her husband’s party. Those who know her have attested to her simplicity. That probably explained the encomiums and praises showered on her at the party, for being the pillar and fulcrum of support of her husband. She is the Yeye Otun Apesin-Ola of Ibadanland and the Yeye Okanlomo of Akanran.

Engr. (Chief) Dotun Jubril Sanusi was born into the family of Alhaji Ganiyu Oladosu Sanusi of Oja’ba, Ibadan and Madam Muslimat Abegbe Sanusi (Nee Adedeji) of the blessed memory. She hailed from Ile Ilaji in Idi-Arere area of Ibadan. Dotun Sanusi grew up in the Elekuro area of the ancient city. He attended Wesley Primary School, Elekuro, Ibadan for his primary education and proceeded to CAC Grammar School, Aperin, Oniyere, Ibadan, for his secondary school education.

He later gained admission to the Department of Petroleum Engineering, University of Ibadan. After university, his first corporate job experience was with Halliburton Nigeria Limited, an American Oil & Gas company. Where he rose through the ranks and cut his teeth in the corporate world. His professional competence and skills however stood him out and it was long before Saipem Drilling, an Italian Oil & Gas company discovered the special talent in him.

The has partnered and also worked with many international Oil & Gas companies like Sinopec Services, Henan Petroleum Drilling Services to mention but few.

Engr. Sanusi’s passion for quality education has also led to the establishment of International College of Arts, Science and Technology (ICAST), a world-class primary and secondary schools in both Port Harcourt, Rivers State and Elebu area of Ibadan, Oyo State.  He is also the Chairman, Ilaji Farms, Ilaji Hotel and Sports Resorts, Ilaji Soccer Academy and so many other companies and business interests.

Due to his service to humanity and contribution to the growth and development of Ibadan and the community where he has his business (Ilaji Farms and Hotel) in Ona-Ara Local Government, Engr. Sanusi has received quite a number of awards and recognitions. He is the Otun Apesin-Ola of Ibadanland, the Okanlomo of Akanran and the Mogaji of his compound, the Olugbade Compound of Oja’ba. He is also the Aare Atolase of Iseyinland, the Aare Ataiyese of Ijeruland and above all, the Most Patriotic Ibadan Indigene (MPII), conferred on him by the Central Council of Ibadan Indigenes (CCII). Engr. Dotun Sanusi is a philanthropist of note and a lover of youths and children. He is the friend of the downtrodden and father of the less privileged.

READ ALSO: THE DIRTY FIGHT OVER CONTROL OF OSUN PDP – ALL THE BACKGROUND SCHEMINGS REVEALED!

The Dirty Fight Over Control Of OSUN PDP – All The Background Schemings Revealed!