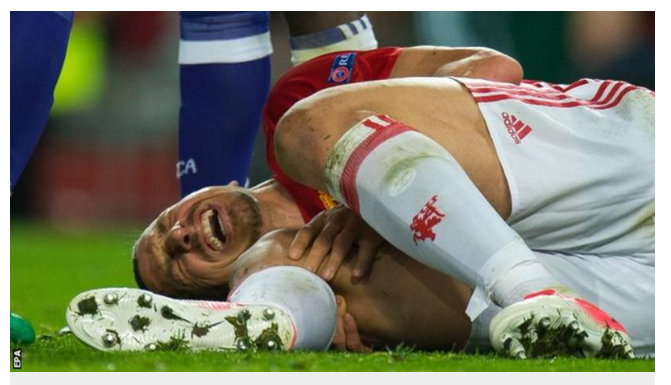 The 35-year-old was injured in the final minute of normal time during last week’s Europa League quarter-final second-leg win over Anderlecht.

Ibrahimovic is United’s top scorer this season, with 28 goals but it is unclear when he will be fit to play again.

“I will be out for a while,” he wrote but added “giving up is not an option.”

Writing on Instagram, the Swede added: “I will go through this like everything else and come back even stronger. So far I played with one leg so it shouldn’t be any problem.

“One thing is for sure, I decide when it’s time to stop and nothing else.”

Speaking before Sunday’s 2-0 win at Burnley, United manager Jose Mourinho said on Sky Sports: “I know (how long he will be out for), but it is for the medical department to be more specific and they prefer to wait a couple more days because the players want to see other specialists and to have an extra opinion and we have to respect that. But they are important injuries.”

Asked whether Ibrahimovic would play again, the Portuguese replied: “I don’t care about it in this moment, I just want the player to recover the best he can.”

Ibrahimovic joined the club on a free transfer from Paris St-Germain last summer but is yet to agree an extension to his one-year United deal.

The defender was replaced on 23 minutes after colliding with a visiting player.

Mourinho said he also knew how long Rojo would be out for, adding: “Marcos was in the best moment of his career, playing very well for us and finally getting a position as a central defender in the national team. It’s really sad.”