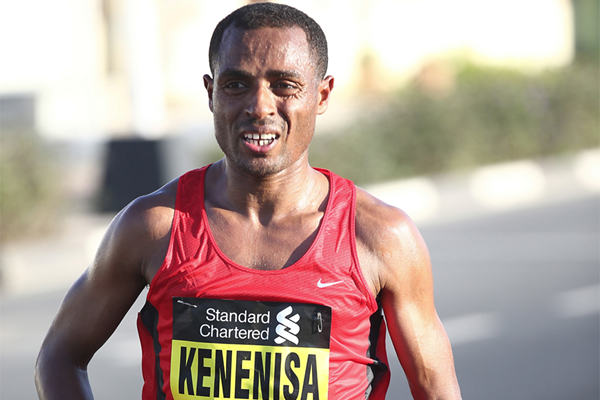 Ethiopian star, Kenenisa Bekele partly blamed his state-of-the-art Nike shoes for his failure to win the London Marathon on Sunday.

The 34-year-old was the pre-race favourite and had been on course to break the world record after 13 miles, but he then slowed down and fell behind his rivals.

He staged a superb recovery to finish second behind Kenya’s Daniel Wanjiru.

He later explained that his problems had been caused by blistering.

Bekele was wearing Nike’s Zoom Vaporfly Elite shoes, which will be worn by Eliud Kipchoge, Lelisa Desisa and Zersenay Tadese in their Nike-backed attempt to run a sub-two-hour marathon in Italy next month.

“I used new shoes. When I was between 15km and 20km, the shoes started blistering my foot. My foot was not in a good position because of the shoes,” Bekele told reporters.

“I changed the style to protect my foot more. It was difficult and changing the style affected my balance.

“Because of that I feel a little bit my hamstring. My leg was not responding well. That’s why I slowed the pace. Around 35km, I was feeling better and increased the pace.”

Officials at Nike could not immediately be reached for comment.

Wanjiru held off Bekele by nine seconds to win in two hours five minutes 48 seconds in his first appearance at the London Marathon.

The 24-year-old insisted he had not been distracted by Bekele’s demise and subsequent revival.

“I was not feeling (under pressure by) anybody because I was having self-confidence. My expectation was to win because I prepared very well in Kenya and my training went perfect.”