Home News It Will Be ‘Irresponsible’ Of Me Not To Probe Fayose – Ekiti Gov-Elect, Fayemi
News 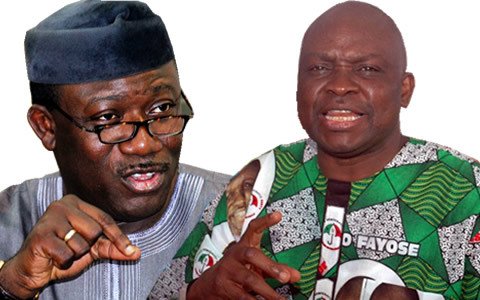 Kayode Fayemi, Ekiti State Governor-elect, has revealed his plans to probe the last four years of the state government under the leadership of Ayodele Fayose of the Peoples Democratic Party (PDP).

While interacting with journalists after visiting President Muhammadu Buhari at the Presidential Villa on Thursday, Fayemi said probing the outgoing tenure would be about avoiding the mistakes of the past rather than witch-hunting anyone.

“Well l think we need to remove this election from personalities. This was an election that we fought on issues and it will be irresponsible on my part to come here and say that we will not examine what transpired in the last four years in the manner of government,” he said.

“What was received in Ekiti state and the expenditure in that period, why were we not able to pay salaries in the state? These issues should be examined in the interest of good governance.

“It is not about probing Fayose, probing Eleka etc, it is about not repeating the mistakes of the past and giving our people good government. So, we will also involve in looking at what transpired in the last four years.”

Fayemi denied allegations that both his All Progressives Congress (APC) and the PDP financially induced voters at the polls. He urged anyone with evidence to provide it.

“I haven’t any substantive evidence of allegations of vote-buying and intimidation. In the place where l voted, there was no vote buying anywhere,” he said.

“As far as our party is concerned, we did not engage in that, it is not our style. We won the election fair and square and it was an election that we fought on issues and not on the basis of any vote-buying. So, whoever has any evidence of that should present it to an independently verifiable audience.”

He maintained that he won the election because of his track record in government,

“What sold us to the people is really the track records of our commitment to social investment, good government, transparency in government, extensive infrastructure and community involvement. These were the things,” he said.

“Everywhere we went during the campaign, we were able to show what we did for each community. All of our 132 communities, there were projects in all of them and they knew that our government was regular in payment of salaries, support to a range of the weak and vulnerable in the society and that was really what sold us.

“We have always been interested in seeing that our people live a decent life, a life without hunger, with social support and that is why we were paying social security benefits to the elderly. We provided youths graduate scheme for the recent graduates, provided support for the communities.

“It is total service we focused on. We increased salaries three times so that people could put food on their table in four years. That was why we provided range of allowances for the workers. There was a huge difference between what we did and the present administration with lack of salaries, heartless, despair and despondency. We are restoring the values and reclaiming our mandate.”

It Will Be ‘Irresponsible’ Of Me Not To Probe Fayose – Ekiti Gov-Elect, Fayemi was last modified: July 19th, 2018 by Reporter