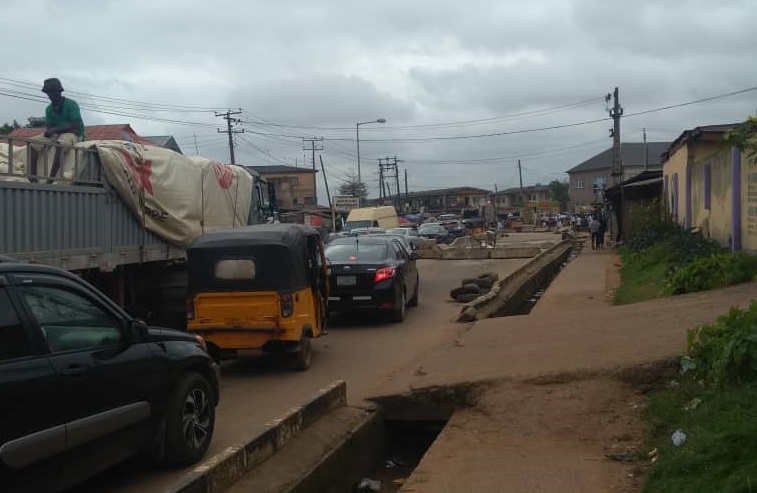 Residents of Iyana Ipaja/Aboru in Alimosho Local Government Area (LGA) of Lagos State have decried the deplorable road conditions in their community.

A quick check by city people team to the Abule-Egba axis shows the tow it’s taking on Lagosians living in the outskirt.

Movement from Command Secondary School through Ile-Iwe to Abule-Egba which normally takes 10mins is now over an hour as a result of potholes scattered on that road. The landlords at Agbelekale junction which is on the stretched road resulted to self-help to ease traffic gridlock by deploying bricklayers to mix granite with cement to block portions of the road on Thursday 25th July, thereby blocking a lane and compressing vehicles to manage a lane pending the blockage.

According to some of the residents, the road conditions have negatively influenced economic growth in the community.

Similarly, our team drove through Ile-Epo in Oke-Odo end of yana-ipaja towards iyana-ipaja and discovered that the main express way which had been blocked since April 2019, as a result of damaged underground water pipe still remain unopened.

The road has become a parking lot for bikers, Maruwa riders and miniature buses known as “Korope” we were told by residents that the underground pipe was repaired in June and as at the time of this coverage, the dug portion remain uncovered for reasons best known to government.

Other residents have noted that the several attempts to call the attention of the State government to rescue the community have yielded no positive results.

The resident added that the road, which has “deep potholes,” ‎has place untold vehicle owners into hardship.

“Many residents are not happy about this road. As a result of its deep potholes residents have to trek long distances, as they could not go with their vehicles,” he said.

The BRT corridor has also become busy all the time and such many losses their jobs due to lateness that arises from that end. Residence appeal to Lagos state governor and the federal road agency to intervene and bring a lasting solution to their sufferings.

In a phone chat one resident told City People on Wednesday that the road is gradually being washed away by erosion.

He added “the motorcyclists “Keke” drivers have hiked their transportation fare as they complain that the road damages their vehicle.”

It was also learned that some groups have begun collecting illegal tariffs on motorists and commuters traveling on the road. One local told City People that “these miscreants calling themselves youth in the community harass residents and vehicle owners to give them money. This is being done on daily basis as they would not allow you to pass the only tiny road unless you give them something”.

City People took photographs of some roads, many sections of which have been washed away by erosion.

Many residents have appealed to Babajide Sanwoolu, the Governor of Lagos State, to take action and maintain the deteriorating roadway. �8�J]�R