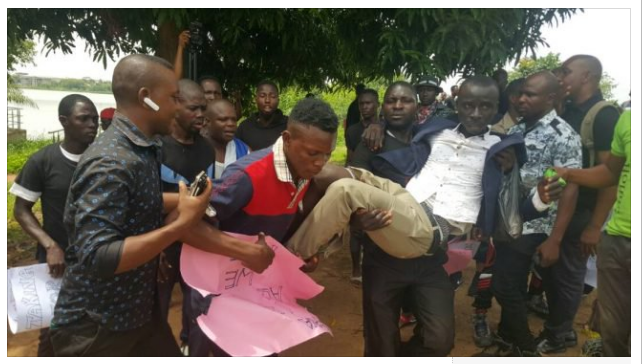 There were heavy sounds of gunshots as some policemen and officials of the Peace Corps of Nigeria (PCN) clashed in Abuja on Tuesday morning.

Trouble started after officials of the corps stormed their headquarters in the Jabi area of Abuja to mark the 20th anniversary of PCN.

The headquarters has been under police siege for over a year.

The officials wore black T.shirt with inscriptions such as ‘We Cry ! We Regret !’ ‘ We Mourn The Rule of Law’.

Dickson Akoh, national commandant of the corps, was addressing them when armed policemen opened fire and released teargas into the air.

After taking those injured to the hospital, officials of the corps reconvened, vowing not to succumb to alleged intimidation of the police.

This is not the first time that the organisation would clash with the police publicly.

In 2017, members of the corps fought back when the police raided headquarters of the organisation.

Over 40 Peace Corps members, including Akoh, in that operation.

The police had alleged that “terrorist affiliates have infiltrated the corps to destroy the existing peace currently being enjoyed in the country”.

Jimoh Moshood, police spokesman, said the Peace Corps was registered as a non-governmental organisation (NGO) but opened “illegal training camps” across the county.

READ ALSO: “THERE WAS NEVER A TIME IN HISTORY OLUWO FAULTED ANY OF ANTI-GRAZING AGITATORS” – REPORT