Kaduna Doctors Threating To Go On Strike After 25% Salary Deductions 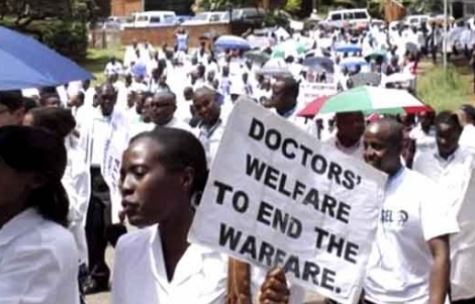 An indefinite strike by the Kaduna State Healthcare Workers Unions and Associations is likely to commence on 19th June 2020 if the associations and stakeholders fail to reach an agreement on the issue of 25% deduction from the salaries of its members for April and May 2020.

The Kaduna State government and the state healthcare workers Unions and Associations have been at loggerheads over the state government’s 25% deductions from the salaries of about 11,000 health workers amid the COVID-19 outbreak, a situation the associations noted in violation of section 5 of the Nigerian Labour Act.

A communique issued and jointly signed at the end of its meeting in Kaduna by the Chairpersons of the health workers union explained that the meeting had all leaders of the associations in attendance.

The meeting the communique said was to review the various engagements of the Unions with stakeholders and out of government including religious and traditional rulers, Kaduna State House of Assembly members as well as other respected members of the society.

The stakeholders committed themselves to a speedy resolution of the issues but asked for seven to ten days to address the issues in dispute.

The communique noted that the healthcare workers are not averse to dialogue and would support any legitimate moves to solve the problems at stake.

After its extensive deliberation, 14 days was given to the stakeholders to allow them time to intervene.

The unions are to continue to engage other stakeholders both in and out of government with a view to resolving the matter.

The communique assured that at the expiration of the 14 days, if no agreement is reached, the unions would be left with no choice but to proceed on an indefinite strike on the 19th of June, 2020.

“We want to thank our members for their patience for trusting the leadership of the unions to fight their course to a logical conclusion.

“We also want to thank the general public for their overwhelming support throughout our struggle,” the meeting observed.