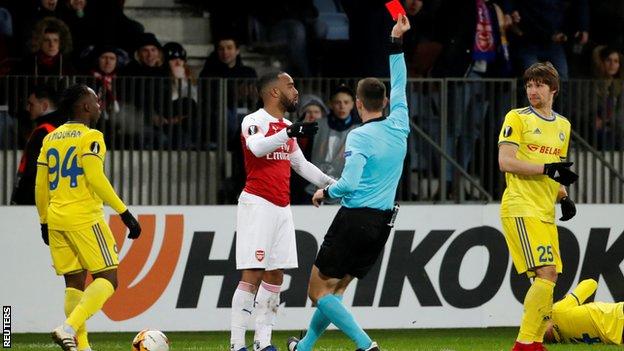 Alexandre Lacazette was sent off as Arsenal slumped to a disappointing first-leg defeat against Bate Borisov in the Europa League last 32.

Lacazette had a goal disallowed early in the second half before being sent off for elbowing Aleksandar Filipovic.

A resolute Bate held on for the win, their first over an English side at home in European competition.

The Belarusian champions will now take a slender lead to Emirates Stadium for the second leg next Thursday.

It was no more than Bate deserved as Arsenal faded quickly after a bright start on a bumpy pitch and sub-zero conditions in Belarus.

Aliaksei Baga’s side were playing their first competitive match since December and doggedly held on to their lead in the second half.

Unai Emery will have hoped the resumption of the Europa League would have given his side some momentum after an inconsistent few weeks.

The Gunners’ final Europa League group game against FK Qarabag in December extended their unbeaten run in all competitions to 22 games. But since then Emery’s side have lost six out of 13 matches, going out of both domestic cups in the process.

Emery responded to that patchy form by naming a strong side for the game in Belarus, showing just two changes from the team that won at Huddersfield last weekend.

There was early promise as Henrikh Mkhitaryan drew a smart stop from Denis Scherbitski within 90 seconds. Further chances for Lacazette and Alex Iwobi followed, but the Gunners quickly deteriorated.

Bate Borisov, meanwhile, are effectively in pre-season having not have not played a competitive game since their final Europa League group match two months ago.

They showed little sign of rustiness, however, and grew in confidence as the game progressed, cheered on by a boisterous home crowd.

Most of their attacking play went through captain Stasevich, who delivered more assists than any other player during the group stages.

Bate debutant Nemanja Milic had already clipped the post from Stasevich’s drilled cross before the midfielder laid on the opening goal from a set-piece.

His free-kick from the right found the head of Dragun, who had evaded marker Sead Kolasinac and powered a header beyond Petr Cech.

Even the second-half introduction of top scorer Pierre-Emerick Aubameyang and January signing Denis Suarez failed to spark a response from Arsenal, who suffered a fifth defeat in eight away games in all competitions.

Their misery was compounded when Lacazette needlessly lashed out at Filipovic and was deservedly sent off, with the French striker later.