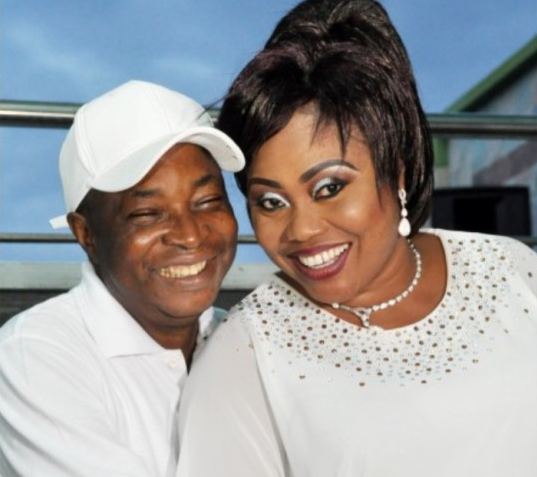 Joke Ojo is a top Lagos civil servant, a pleasant, kind, down to heart and a socialite who is always in a happy mood and  loves attending parties and events. She got her reward when her family members  and friends massively turned up to honour her. 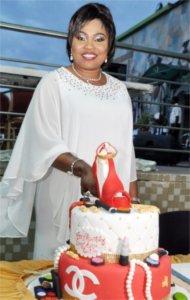 Joke Ojo is a top Lagos Civil Servant. She is happily married to Engr. Funsho Ojo with 4 lovely children who are doing wonderfully well. The first born is an artiste, a musician, the second born is Barrister at Law, the third is a Pilot in the making while  the last and the only girl is a broadcaster. Joke is the first born of her parents and she has 4 lovely siblings, who are also doing wonderfully well. The celebrator stepped in to the party a  few minutes past five O’clock  looking radiant in her white dress matched with white jewellery flawless.and make up

PARTY HELD AT THE POOLSIDE

The event took place at the Rooftop Poolside, West Town Hotel, Ikeja, Lagos. The lovely event place was given a nice decoration by Feloda Koncepts & Events. She did a very wonderful job. Everyone guest  had a place to sit. The decoration on the tables and chairs added beauty to the event.

COLOUR OF THE DAY

The colour of the day was white. The peaceful colour made guests look as angels, cute and fabulous on their outfits which made the event a colourful one.

MC OF THE DAY

The event of the day was anchored by Olu Badmus. It started at a few minutes past 5pm. He made sure the event was hitch free from the begining to the end.

CEO OF YEM-KEM STORMS THE EVENT

Dr. Akintunde Ayeni, the CEO of Yem-Kem International Centre for Alternative Theraphy was the Chairman of the day.  A natural health practitioners who is gracefully aging stepped out in his white lace outfit matched with gold orange cap to honour the celebrator, who is a sister to him  as they hail from the same Ekiti. He The socialite left at a few minutes past 7pm.

DOLAPO BADMUS SIGHTED AT THE EVENT

Dolapo Opeyemi Badmus the newly appointed Zonal Police Public Relation Officer for both Lagos and Ogun State was at the event. She is the younger sister of Joke Ojo. She dazzles in her white gown, looking so sexy and beautiful.

Dami-One is one of Joke Ojo’s children. He is the first born and also a fast-rising artiste, who has been in the music  industry for 2 years. He regaled the guests with some of his hit tracts at the event,  which indeed most guests to put on their dancing shoes.

The moher of the celebrator, Miss Elizabeth Badmus, graced the event. She was looking so gorgeous in her white lace outfit matched with jewellery to  honour her baby girl. She arrived early at the event and gave a brief speech about the celebrator. She  revealed that she trained celebrator to be a socialite and a party lover right from her childhood.

At few minutes past 6pm. The birthday girl Joke Ojo with her hearthrob, Engr. Funsho Ojo was ushered to the birthday stand  by MC Olu Badmus, who coordinated the cutting of the cake after the spelling J.E.S.U.S. together with their children. The cake was produced by the popular cakes & creams. Family members, friends and well wishers of the birthday girl later joined posed for memorable photographs.

At the event, there were surplus delicious foods with different exotic wines for the refreshment of guests.

S.B. Live Band from Lagos was on the band stand. He arrived early to entertain  the guests with old blues to keep them in mood for the party before unleashing his sensational music to memorise and made sure all the guest were on their feet dancing and having good time.

Joy Edelduok, an Assistant Comptroller of Customs, attended the event. The beautiful, tall, light-complexion-babe stepped out in her white outfit, looking so cute to honour her friend, the celebrator.