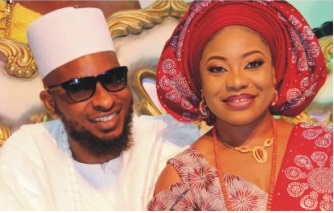 It was a purple-and-yellow affair on Saturday, 31st of March, 2028, when Lagos society woman, the Late Iyalode Adunni Bankole’s son, Owolabi, finally introduced himself to his heartthrob, Miss Adebayo’s family. The event, which took place at Neca Event Centre along Alausa road, Lagos, paraded many a-list Nigerian celebrities of note, who came to show love to the Bankoles.

The Groom’s father, Chief Alani Suarau Bankole, led the entire Bankole’s family to Comptroller (rtd) Adekunle and Mrs. Ebunola Adebayo, the parents of the bride to seek the hands of their beautiful daughter for his son.
Though, Iyalode Adunni Bankole is late, but her first daughter, Toyin Bankole, played the role of the groom’s mother, while her younger ones, Mopelola Jato and Desola Bankole also supported her. They were cynosure of all eyes in a special purple lace.

Chief Alani Suarau told the large number of guests that his relationship with the Adebayos dates to many years back. It started at a time the bride and groom were young. He explained further that his late wife was one of the close friends of the bride’s mum. His words “I have only come to introduce ourselves officially to the Adebayos because we have only come to pick our daughter and not our wife”.

The Bankoles, who are known not to do things in small measure, brought lots of gifts for the bride’s family. It was beautifully put on display for the guests to see.

A few minutes past 2pm, the Alaga for the groom’s family, Mrs Okikiola Olariki, ushered in the handsome groom, Owolabi, who looked suave in white attire. He had happiness written all over his body as he danced in with his friends.
The bride’s Alaga was also on her feet. Madam “Siwoniku” is one of the veterans in that field” and she is never found wanting when it comes to anchoring wedding.

She quickly welcomed the groom’s family and ushered in the beautiful bride, who looked stunning in ash lace matched with embellished burgundy headgear. Her darling husband to be, “Owolabi”, couldn’t take his eyes off her as she danced in. Not only was her make-up perfect, her choice of 18-carat gold complemented her flowing body-fitted gown. She danced her heart out and it was obvious she has found a life partner in Owolabi.

Hon Dimeji Bankole, former Speaker, House of Representatives, who is also the elder brother of the groom, was also on ground. He was the one who led Chief Alani Bankole’s children to the event. They were all so happy to see their brother, Owolabi, taking the first leg into a married life. Chief Alani Bankole’s wives were also in attendance. They shared a strong bond with the Late Iyalode Adunni Bankole in her lifetime.

How I Fell In Love & Married SHINA PELLER 13 Yrs Ago