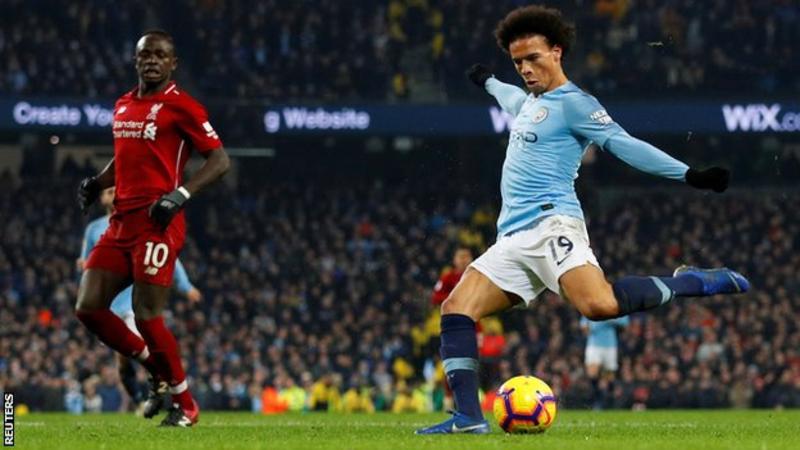 Manchester City reignited the Premier League title race as they ended Liverpool’s 20-game unbeaten start to the season to reduce their lead at the top of the table to four points.

Pep Guardiola’s hosts knew nothing less than a win at Etihad Stadium would do on a Thursday night riddled with tension that produced a game that was frenetic if not a classic.

Leroy Sane produced the decisive moment 18 minutes from time as he collected Raheem Sterling’s pass to fire across Liverpool goalkeeper Alisson, after it had seemed like Roberto Firmino’s stooping header would maintain the visitors’ unbeaten sequence.

Sergio Aguero had earlier given City the lead with a rising, near-post drive just before the interval.

That came after a moment of drama when Reds forward Sadio Mane hit the City post and John Stones scrambled the ball off the line after his attempted clearance struck goalkeeper Ederson – with data subsequently showing the ball had failed to cross by just 1.12cm.

Both sides had chances in a frantic finale but it was City who claimed a crucial win.

Guardiola was blunt before the biggest Premier League game of the season: anything other than victory was not an option.

And while City did not produce the purist style that is their trademark, they dug deep to get the job done despite some late moments of panic in their penalty box and wayward finishing in the other.

City were in danger of falling off the pace following three recent losses that allowed Liverpool to open up an imposing advantage – and that was why the stakes were so high amid a crackling atmosphere.

It was master marksman Aguero who made the crucial breakthrough with a brilliant near-post finish, thinking and moving quicker then Dejan Lovren to beat Alisson.

City also showed real strength of character to respond just as the momentum Liverpool were generating from Firmino’s leveller threatened to take the game away from them.

And at the heart of it all was the magnificent Fernandinho – a man seemingly irreplaceable among the City’s stellar cast – as he delivered a masterclass of controlled midfield play to steady his side when required.

It should be said, though, that the hosts enjoyed a measure of good fortune when leniency from referee Anthony Taylor allowed captain Vincent Kompany to escape with only a yellow card for a reckless lunge at Mohamed Salah after he had been played into strife by Stones.

But this was a huge night for City and Guardiola and they emphatically answered the questions that have been levelled at them.

It was also a victory achieved without needing to call on the brilliance of Kevin de Bruyne. The sight of the Belgium midfielder as an unused substitute was an indicator of the strength still to come from the champions.

They can now look upon a reduced Liverpool lead and believe they have very much kept alive their hopes of retaining the title.