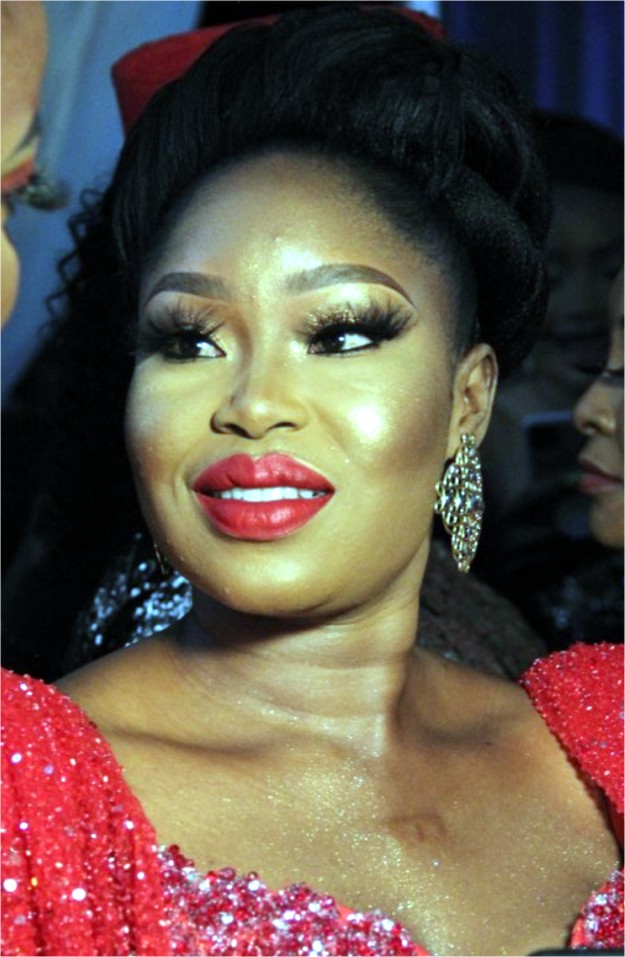 Sunday 23rd of February, 2020 will forever remain unforgettable in the minds of many Lagos society women of style and panache and this is because many new Lagos stylish young babes made it a day to party with Lagos real estate billionaire, Lolade Valentina Abuta, as she celebrated a classy 35th birthday.

To say the birthday was classy and unique is like stating the obvious, but what many can’t forget in a hurry is the fact that, many Lagos society babes stormed the party enmasse to outshine one another with their fashion statements. This was obvious from the way they combined their outfits with unique 18 carat gold and diamonds. Of course, many of them are young entrepreneurs who run big business empires. It didn’t come as a surprise that they all rocked 25,000 naira Aso-Ebi with million of naira 18-carat gold and diamond.

Don’t also forget that the celebrant Ololade Abuta, is also one of the young Lagos billionaires who has made a name for herself in acting, more especially in real estate.

She is one of the real estate top female players who knows her onions and spares no cost to look her best. And that was why she spared no cost to stand out at her 35th birthday. Well, for Lolade Abuta, it is not just a thanksgiving, she is thanking God for another 15 years after her 20th birthday.

Another reason she made sure party her look, her attire and her party was one in town is because her brand “Gracias Properties” is a big brand which gives many other real estate companies a run for their money.

The ebony pretty babe dazzled when she stepped out in 3 different luxury attires made by number one celebrity designer, “Toyin Lawani” of Tiannahstylishingplace.

There is no doubt that Lolade that stole show at her own birthday. Her first attire was a red embelished off shoulder gown, transformed by @ arakenge stitches. She matched the gown with unique 18 carat gold from “Adeyemo Ibironke Adunni”, one of the young gold merchants in Nigeria.

You need to see her headgear! Her aso-oke was by Goldiva-Fabrics, the pretty daughter of APC Chieftain, Cardinal Odumbaku. There is no doubt that “Oreoluwa Odumbaku Balogun, knows the rudiment of aso-oke business. What about Tshakk, who handled her face beat? Hajia Shakirat Tolulope Adebayo rules the make-up market, as Lolade’s make-up really complemented her outfit.

The celebrator’s second outfit was supplied by Toyin Lawani, while her 18 carat gold was from Abiola gold. Yes, the best friend of Sikirat Sindodo stocks one of the best gold collections, while her hair was neatly wrapped by “Oludavid”.

Another set of celebrity babes whose 18carat gold wag at #OVA35 are: Alhaja Suliat Malo, the CEO of Malo Petroleums, Alhaja Aishat Keshiro, the CEO of Ronkesh Global, Alhaja Rafiat Abiodun, the CEO of “Raphael4real” Fabrics. She supplied all the gold and red sequence aso-ebi rocked by over 1000 celeb babes, Hajia Jolade one of the close friends of House of Beautyfabrics Ewa. Ewa is the younger sister of Amore Fabrics.

Have we told you about Hajia Lara Aduwo Gold & Gown? The CEO of “aso-ebi by Laviva and Tosin Osinowo of “Ile Alamala, are no push overs when it comes to classic gold. She also rocked 18 carat gold. So also did Abisolagold, to mention only a few.

It was also an array of Nollywood super stars who also made it a day to party with one of their own. Among many sighted were: Laide Bakare, Ayo Adesanya, Foluke Daramola, Aishat Lawal, Omo British, Iyabo Ojo, Eniola Badmus, Toyin Abraham, Omobutty, Lola Magret, “Omo Alhaja”, Mide Martins, Wasila Coded, to mention but a few.

Have we gisted you about celebrity with the best gown? Desola Afod, the pretty wife of Kunle Afod. Her unique fabrics was transformed by “House Offianar_beautypro while her hair was by “Hair by Sleame”. So also is Jumoke Abuta, the elder sister of the celebrant. She rocked the party just like her sister, so also is beautiful Bimbo Balogun, she rocked the party with her unique gown matched with timeless 18carat like her friend, Yetunde Olorunfemi. Yetunde supplied all the luxury drinks used for the party.

What about the gown rocked by Mofe Fash? She surely knows what suits her petite body frame.