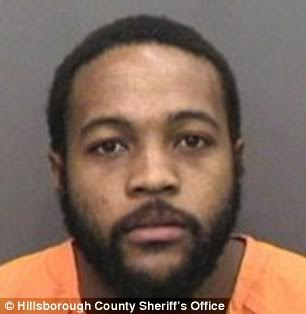 A video has surfaced online showing a prisoner in Florida attacking a guard and trying to strangle him with a towel before he was overpowered by fellow inmates. The attack was captured by security cameras inside the Falkenburg Road Jail in Tampa. It showed inmate Kiondre Zachery, 22, try to strangle Deputy D. Hernandez,31, on Tuesday. Zachery is seen in the video walking towards Hernandez’ as he stood in a jail pod filled with other inmates.

On approaching the guard, the 22-year-old wrapped the towel around the guard’s neck and tried to strangle him while the uniformed official struggled.

Hernandez freed himself eventually, then with the help of other inmates, Zachery who was still trying to throw a punch, was wrestled to the ground till backup arrived.

Hernandez, who has been a guard at the prison for 10 months, suffered a twisted ankle, bruised knee, and abrasions to his neck following the attack. Zachery was in prison for burglary. He has now been charged with aggravated battery on a law enforcement officer and moved to an isolation cell

Moment an inmate attempts to strangle a prison guard with a towel [WATCH] was last modified: March 4th, 2017 by Reporter