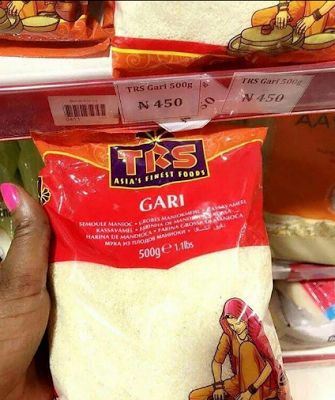 Photos of packaged Garri, which was said to be imported from India surfaced online some days ago. The National Agency for Food and Drug Administration and Control (NAFDAC) says it has carried out preliminary investigation into the food sample and the imported Garri samples had no NAFDAC number. Read a statement from the agency below;

This is the tweet that first caught our attention on Sunday 19th February 2017. It is about a certain pack of Imported Garri with the source given as India, which was found on the shelve of a Nigerian supermarket.

We knew we had work to do, and Monday 20th we did. Our actions and findings are outlined below: (Updates via @NafdacNigeria) -NAFDAC Officers visited the Supermarket in Ikoyi today -26 packets of 500mg each of the products were seized for analysis -The product has no NAFDAC number –