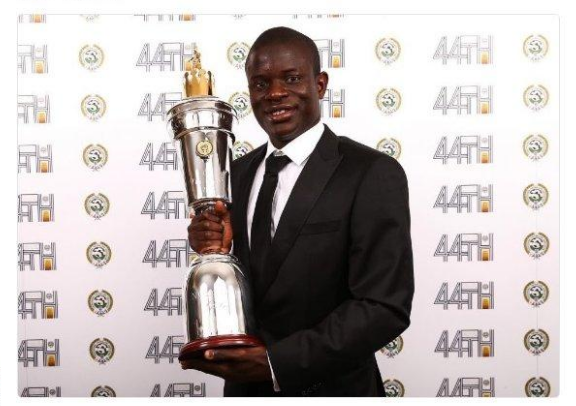 N’Golo Kante has won the Professional Footballers’ Association PFA Player of the Year award for 2016-17.
The Chelsea midfielder, 26, beat Eden Hazard, Harry Kane, Romelu Lukaku, Zlatan Ibrahimovic and Alexis Sanchez in the vote by his fellow players.
Tottenham’s Dele Alli won the young player prize for the second successive year. Manchester City’s Lucy Bronze won the Women’s Player of the Year award.
Birmingham’s Jess Carter was named Women’s Young Player of the Year.
Kante said: “It’s a huge honour to be chosen by the other players. It’s the biggest honour to get this award.”
The midfielder is on course to win the Premier League with Chelsea, having done so last season at Leicester, and added: “My first two seasons were very beautiful. Last season was very beautiful. This season so far, we have had a good season but we have to finish well.”
Former England captain David Beckham received the PFA’s Merit award for his contribution to the game during the ceremony at the Grosvenor Hotel in London on Sunday.
Former England women’s captain Kelly Smith – who became England’s first female professional footballer when she joined American side New Jersey in 1999 – landed the PFA Special Achievement award.
Kante was key to Leicester’s surprise Premier League win last year and could become first player to achieve the distinction of winning successive titles with different clubs if Chelsea can stay ahead of Spurs in this season’s race.
Since signing Kante in July, Chelsea have gone from a mid-table finish to the top of the pile with six games to play.
In his absence, Leicester have largely struggled to replicate their heroics of last season and are still not safe from relegation.
France international Kante has played every minute in the league this season apart from the Boxing Day game against Bournemouth, when he was suspended, and the final 11 minutes against Tottenham on 4 January.

“In My Team, I Don’t Want Selfish Players” Conte Hits Back At Fabregas