Nothing Has Changed About My New Life @ 60 – LAGOS’ Former Deputy Gov., ADEJOKE ADEFULIRE 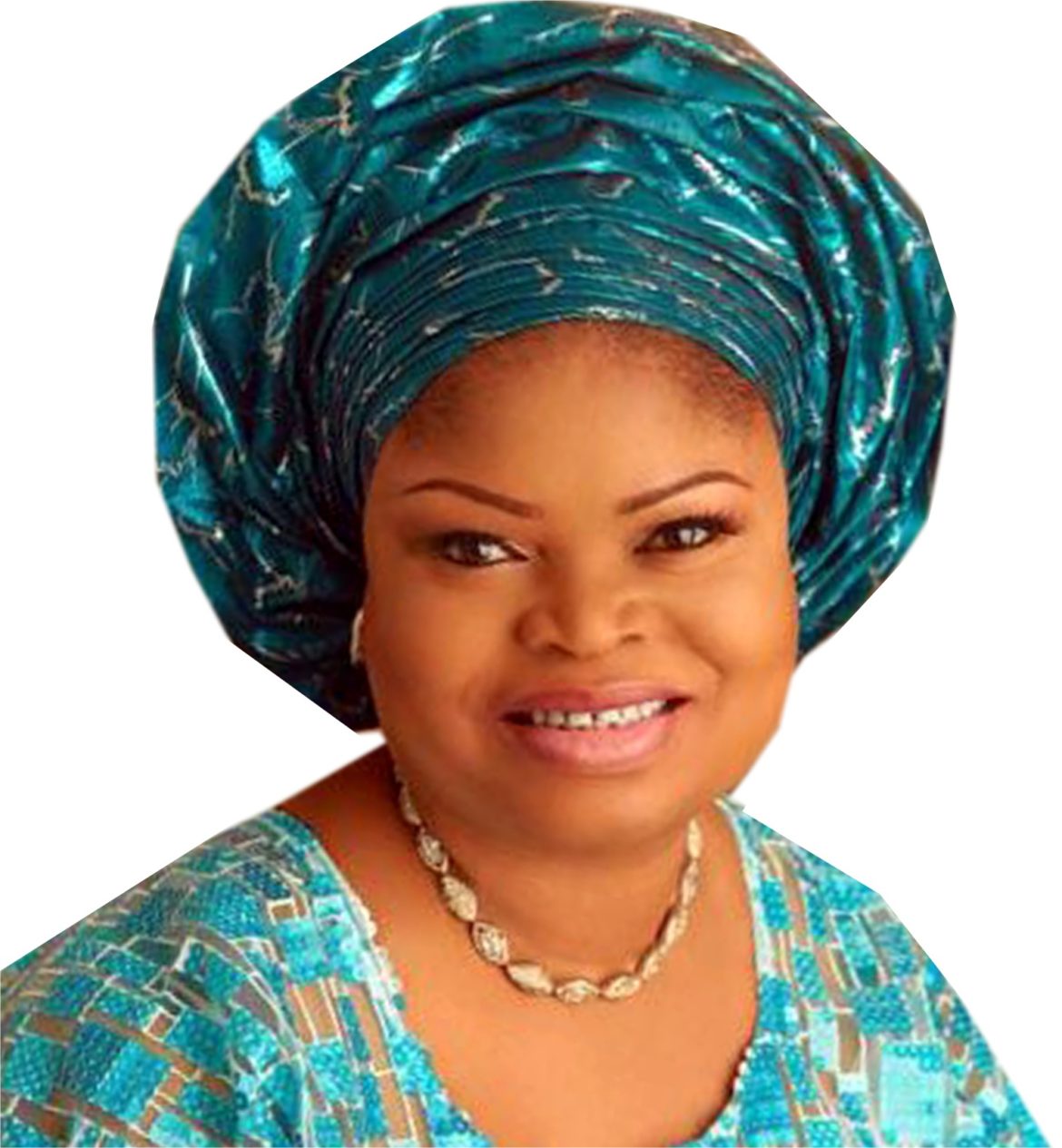 For a very long time, her name has been in vogue in Lagos. Mostly, her name is ubiquitous, you hear her name in all corners of politics in Lagos where she holds sway. Lagos former Deputy Governor, Princess Adejoke Orelope Adefulire, is an enigma. The hardworking Senior Special Adviser to President Buhari on SDG recently turned 60 and she marked it in joy.

From an early age, it was obvious that she saw politics as a means to the end, a platform that allows her contribute her quota to nation-building. A diploma in Social Works and Bachelor of Science Degree in Sociology prepared her for her role in politics. It is no surprise to find that she maintains her relevance even as political tides swept many people away from their course.

By all standards, she is a very focused woman. This has contributed, in no small measures, to her success story today, particularly in the political circle. For her commitment to the cause of womenfolk in the state, she was first appointed a commissioner for women affairs and poverty alleviation under the Asiwaju Ahmed Bola Tinubu-led administration. Her constituents in the Lagos West Senatorial Zone couldn’t be happier because she didn’t let them down in any way. It is on record that in her capacity as commissioner, she initiated a lot of trail-blazing programmes including economic empowerment, women development, promotion of campaign against child abuse and other allied matters. Her achievements, however, didn’t go unnoticed. In 2011, she emerged the Deputy Governor to a former governor, Babatunde Raji Fashola, whom she said she felt privileged to have worked with. In her capacity, she demonstrated uncommon leadership traits, which has since put her in the good books of the party and its leaders. As proof of her love for the party, she voluntarily sacrificed her political ambition, when she stepped down from the Lagos State senatorial race. Now, she got the big job at the Presidency and her boss, Mr. President, also joined the world in celebrating her at 60 and lauding her efforts. Pres. Buhari saluted her courage in delving into politics and governance and taking interest in developmental issues, thereby setting the pace for many women to actively participating in politics in state and national issues.

In 2007 she won the International Public Servant of the Year award by the Scottish Widows; a UK-based NGO and bagged the Lagos State Man of the Year Award in 2009. She is also a recipient of the Guinness World Records for the most children reading-aloud with an adult at a single location, which she achieved, while reading with 4,222 school children in 2011. Coming from a political background, Princess Adefulire, rose to the top owing to hard work and she is always grateful to her father, who influenced and support her politically. At 60, she looks graceful and young. She has been married for over 30 years and blessed with good children. As a public servant, how has she been able to cope as a mother, a wife? This and many more were questions she shed light on in this exclusive interview on her life at 60 with City People Society Editor, TAYO FAJORIN OYEDIJI, at the Arise Women Conference in Lagos.

I am a product of grace. I give glory to God. Every day, I look at myself and sometimes I don’t even believe that I am 60, but I am. Even sometimes ago, Mr President said he was not sure that I am 60. For me, I know it is God who keeps me this way. My look is a result of God’s grace. I am very happy turning 60., I give all honour and adoration to the Almighty, who has specially created me, who has been my helper and pillar of support because it is only God who can explain it. I don’t have an explanation for all this (60 years but I thank. Him for keeping me for all these decades.

Working with the President as one of his new SSA, How do you feel?

Well, I feel very elated. I have worked all my life in Lagos. At my tender age, from the legislature, electoral commissioner, commissioner, Deputy Governor and now. I never thought I would go to the federal  I never thought I will go to Abuja to work. But when God says Yes, no one dare says No. It is a call for action. President Buhari is a good man; a talented and peaceful boss. He is a man whom God loves and you can see that God loves him when he was sick, nobody thought he would be alive today, but God said yes and he made it. When God loves you, he will show you in a miraculous way and do what no man could do. Nobody could say, he would be alive today, but God said yes, so the President is a special being loved by God. Even despite the crisis in our party (APC), when God said he would go back for a second term, he emerged the winner. People voted for him and he won the election, so it is about God. A person of his kind is good to work with.

You have a good marriage and it has lasted for over 3 decades, how are you able to sustain it this long being very active in service for many years?

I once said I am a product of grace. So, it shows in every aspect of my life. I cannot explain it. But what I know is that. it is our responsibility to manage our home very well. God has given us (women) the ability and capability to do it. The day you know that public office is about public trust and about service, you would not develop any headache. I don’t have a headache over my various responsibilities and I don’t want to have one. And for me, I take my home as number 1, I don’t joke with my family, if I am able to manage my home, then I will be able to manage the society. If you cannot manage your home, it would be difficult to manage your public office. My family especially my husband and children know I don’t have a headache over such issues. Since my primary assignment is to serve and also sustain and maintain home, my prayer is that my home should be sustainable and God answered my prayer. What God says I should not do, I don’t do. I Thank my husband sincerely from the bottom of my heart, I am so grateful to him. He is the wind beneath my wings, I thank my children and I thank my leaders, I thank my parents who brought me into this world. I give glory to Almighty God.

For how long have you been married?

Wow! Many years ago. We are about to celebrate our 40th anniversary in a few years, but now we are 35 years in marriage. We thank God for bringing us this far. He has blessed us with wonderful children.

Any regret at 60 at all, looking back to those years?

Well, I have one, but not regret so to say, because I don’t tolerate negativity. I am always positive in my thinking, in my action and in any direction I face because we have power on our tongue. But let me be thankful, God has blessed me with a good husband, wonderful children and I have good things to show for it. But I must mention that when I was young, I was almost denied education because I am a girl child thinking that the name of my parents especially my father would be lost and that is why I am carrying the name now. Can you imagine? I would have lost that opportunity. From that my name now, they know my father all over the world, but he was thinking if I married, his name would be buried under my husband’s name, but when my mother took up the responsibility of sending me to secondary school, I promised her, I would not disappoint her and that name that they are talking about I would carry, no matter how long my husband’s name is, I will carry it and I am carrying it conveniently to the glory of God. So, when my father was old and knew what the name was and what God was doing with the name, not me, I don’t have the power, he came to me and profusely apologised and I told him I have pardoned him before he went to join the Lord.  It is not a regret, but I think he was being human. I share a very close relationship with my father, in fact, I am his carbon copy. The resemblance is striking. He loves me, I know, but he does not understand that women can carry maiden name and husband’s name especially in public service and it is what I thought to do and God said yes and I am using it conveniently. My father really made an impact on my life. He influenced my career in so many ways and until he passed on, our closeness was topnotch. I am grateful for the life he lived.

Can you recollect any happiest moment of your career?

Well, in politics, there is up and down, I don’t look back to issues. God has won whatever battle it was and I cannot but feel grateful each time. I am moving forward and that is why I am going to Arise and Bloom. So, there have been many happy moments and also on the other side, but I always take the good moments. That is why I will Arise and Bloom.

Do you feel you miss Lagos now that you are in Abuja?

When God says this is your next place, you don’t complain. My life is all about service. For service, I don’t miss Lagos, for the enjoyment I miss Lagos. I have been in Lagos all my life, served in Lagos all my life. Any Liagosian will always miss Lagos, especially on weekends. Today now, I am in Lagos, Monday I am in Abuja. It is just a function of traveling and God will keep us safe.

Oshiomhole clears the air over alleged attack on Oba Akiolu, Oba Otudeko and others

How Gov. FAYEMI & FAYOSE Ended Their...