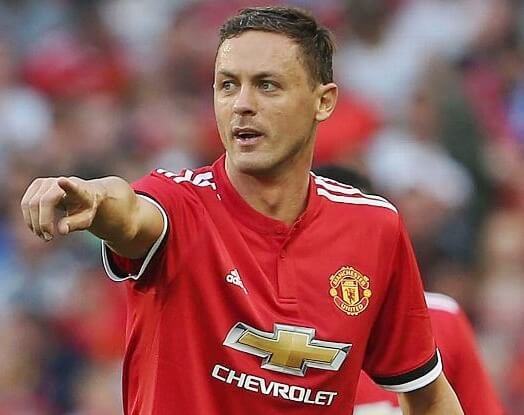 Nemanja Matic believes he has nothing to prove when Manchester United travel to his former club Chelsea in the Premier League on Sunday.
The midfielder left Stamford Bridge for Old Trafford for around £40m in the summer to again play under José Mourinho, who signed him for Chelsea in 2014. He also had an earlier, fringe spell at Chelsea.
Matic said: “I feel when I played there, I showed them my quality. We won the title twice and also two cups, so I don’t have to prove to them anything. I just have to prove something to my new club.”
Of the reaction he may receive, Matic said: “I don’t know. When I played there I always gave 100%. I’m sure they respect that but if not I don’t really care.”
The champions’ decision to allow Matic to join United caused surprise. “The only thing I can say is that I am happy to be part of this club,” he said.
“I’m happy to be working with Mourinho. That’s all I can say. As I said, when I played at Chelsea I give always my best to help the team but now Manchester United is my club and I will try to win there.”
Matic’s 45th-minute shot led to Mile Svilar’s own goal in United’s 2-0 win over Benfica at Old Trafford on Tuesday. The victory gave Mourinho’s team 12 points from four games, and one more point would guarantee qualification for the knockout stages. Chelsea lost 3-0 at Roma but Matic is wary of Antonio Conte’s side.
“We know we must respect them,” he said. “They are a good team, they’re champions and it’s going to be a hard game for us, but we also have our own qualities.”
United have 23 points, five fewer than the leaders, Manchester City, and Chelsea are four points further back. “The Premier League is difficult,” Matic said.
“It doesn’t matter if you’re first with five points, even seven or 10. You lose two games and the other teams are there, so it’s important not to lose points, of course, but there’s a long way to go.”
Thibaut Courtois believes Chelsea’s chances of retaining the title rest on defeating United. “This is a must-win game,” the goalkeeper said.
“Manchester City are already nine points ahead of us, Manchester United four and Tottenham one. We must win games like these to remain at the top and close to the other ones. We will try to get the three points and will give our lives for it on Sunday.”
I Have Nothing to Prove Against Chelsea – Matic Speaks Ahead of Sunday Clash of Devils And The Blues was last modified: November 2nd, 2017 by Arinze Ago