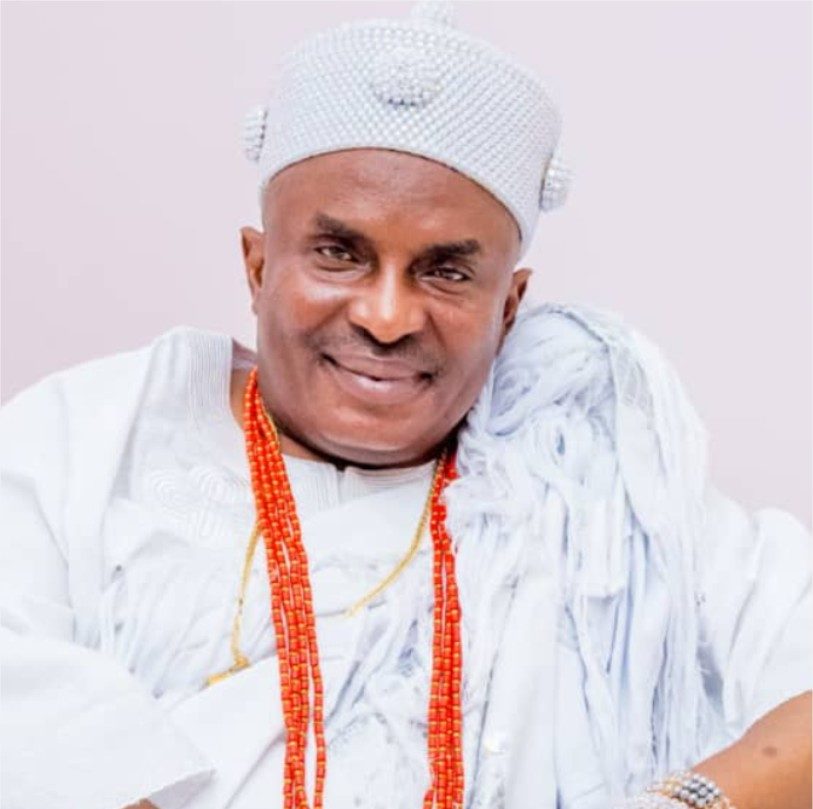 •Crowned By The Ooni Of Ife, & ALAAFIN Attends

Hardly does the Ooni of Ife & the Alaafin of Oyo attend events together ancient town of Apomu in the state of Osun went agog on Friday 7th of February, 2020 when HRM Oba Kayode Adenekan Afolabi(Atoyebi II) took the staff of office from the state governor, Alhaji Gboyega Oyetola subsequently crowned as the new Alapomu of Apomu kingdom by the Arole Oodua, Ooni Adeyeye Enitan Ogunwusi(Ojaja II) the Ooni of Ife.

While crowning Oba Afolabi as the new  Apomu, Ooni Ogunwusi who is also the permanent chairman of Osun State Council Of Obas & Chiefs described Apomu as a very important part of Yorubaland with Ile-Ife as its source.

“Congratulations to all my children of this ancient town of Apomu. This town remains a very important part of the Oduduwa territory not only because  its a direct creation of Ife-Ife but also for the strategic roles Apomu had played in the past in Yorubaland. That’s why Alaafin is here, Olofa is here, Akinrun is here, Oluwo is here and several  monarchs.” Ooni said

Ooni, the Co-Chairman of National Council of Traditional Rulers of Nigeria(NCTRN) eulogized the newly coronated Alapomu as a well educated fine gentleman and as an embodiment of Oodua cultural values who is readily competent to take Apomu to greater heights.

In his address, the new Alapomu Oba Adenekan Afolabi who stunned the cheering crowd with his iconic dress which is synonymous to that of the Ooni described himself as a direct descendant of the Giesi ruling house of Ile-Ife.

“Some people might wonder about my style of dressing here today, it is deliberate to show my root as my father came from Ile Ife to settle down in Apomu many centuries ago.

“I am from Gbegbaje branch of Giesi ruling house in Ife, my great uncle was the 40th Ooni of Ife who reigned between 1823 to 1835.” Oba Adenekan noted.

While presenting the staff of office to the new monarch on behalf of the State Governor, Alhaji Gboyega Oyetola, the Secretary to the State Government, Mr. Wole Oyebamiji congratulated the people of the ancient town over the successful appointment of the monarch which he described as a round peg in a round hole.

While expressing his confidence in the new monarch’s ability, Oyetola noted that the town will experience tremendous development during the time of Oba Adenekan Afolabi. The Governor, however, charged the new king to always place the interest of his people as the priority of his reign.

The event which was graced by several dignitaries including the Governor of the State of Osun who was represented by his wife, Alhaja Kafayat Oyetola and government functionaries led the SSG, Mr Oyebamiji, Alaafin of Oyo, Oba Lamidi Adeyemi, the Olofa Ofa,  Oluwo of Iwo, Aragbiji of Iragbiji, Akire of Ikire and Olukoyi of Ikoyi-Ile among others was made colourful with cultural displays by series of traditional performers.

Just like other Yoruba towns, Apomu is a town founded by Olaarode; a crown Prince from Gbegba Aje Royal dynasty in Ile Ife who left Ife after he contested to become the Ooni but lost. As enshrined in the Yoruba tradition in those days, Olaarode left Ife for his brother to console himself.