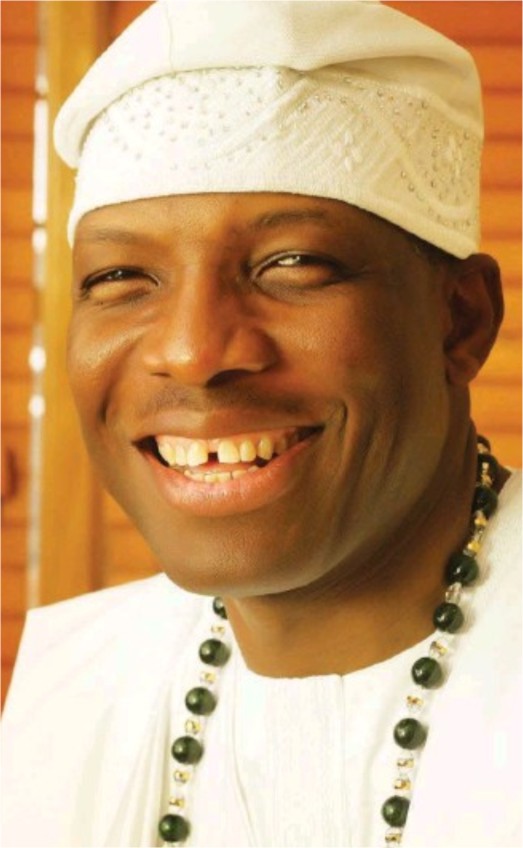 HRM Oba Dokun Thompson is one of Nigeria’s most colourful traditional rulers. He is the Oloni of Eti Oni, a sleepy town in Osun State. The big news is that he has just written a definitive book on The Origins of Cocoa. Many don’t know that Eti-Oni is home to Nigeria’s oldest Cocoa plantation and the birthplace of Cocoa in South West, Nigeria. The Cocoa crop was introduced into Eti-Oni in 1896 by Gureje-Thompson and it was from here that Cocoa spread to neighbouring towns and other parts of the region where it later became the economic mainstay of the old Western Nigeria.

Eti Oni annually holds a Cocoa Festival which is a celebration of the rich cultural heritage of Eti-Oni and an initiative of the Eti-Oni Development Group, with an objective to create a renaissance in the cocoa industry and build bridges between production and consumption to achieve sustainability and through it, transform the rural community of Eti-Oni into a sustainable model smart town in line with the United Nations Sustainable Development Goals (UN 2030 SDGs).

The annual week-long celebration is usually packed with carefully well thought out events and activities to capture the full essence towards the primary goals and objectives of the organizers offering opportunities in developing the tertiary sector of the agricultural business particularly the tourism aspect as a by-product and value add which is key to the nation’s need for diversification of her economy.

The Foreward to the book was written by Professor the Lord Alton of Liverpool who is a member of the British House of Lords.

“It is my great honour to provide a Foreword for my friend, The Oloni of Eti-Oni to this lovely publication. It is a book about Cocoa but also about its impact on a town, one that may be remote in location to global affairs but whose economy, like many other African towns, is intrinsically linked to the production of cocoa. For British people – with deep historic and fraternal relations, evidenced today through our joint membership of the Commonwealth – there needs to be a better understanding of the economic importance of new paradigms for trade and the impact this can have on people, places and products.

In this presentation, Oba Dokun Thompson answers a fundamental question that I once put to him: How can Britain increase and improve trade with Africa? In answering this, he convincingly makes the case for new alternatives to the old paradigm: arguing for direct linkage between British traders and Africa’s farmers within an ever expanding, greater, refined and integrated framework.”

“This pictorial book about Cocoa – one of the world’s favourite products – describes our decades old partnerships and triggers the much needed discussion needed to create the right policies and the right environment for trade and stability for places like Eti-Oni and Nigeria. Undoubtedly, the Oloni’s efforts to achieve this are already beginning to pay-off – and this book is a further contribution in forging these dynamic new prosperity-led relationships”.

I personally believe in the Eti-Oni project and have been greatly impressed by the Oloni’s vision. He has brought together and fused an emerging and evolving development model with his practical experiences and deep love of Eti-Oni to build the foundations of an exciting, new and lasting economic legacy.”

“His story and that of his community deserve to be more widely known. This book is a contribution to achieving that goal.”

Oba Thompson revealed that his book is a result of many stories, experiences, journeys and several occurrences of over a century that have influenced his thinking and the way he addresses issues or what some may see as a challenge, to achieve a positive outcome for the benefit of all.

“I am asked several times, why I tend to do a lot of travel and not available in the palace most times and my response is very simple: What benefit will my being in the palace offer the people or what value can be possibly added to the community, if I had to sit in the palace all year round like the days of old?

“We have a community to build and this requires harnessing the resources on ground through building several partnerships. Can that be achieved from the comfort of my room? The journey so far has seen several people directly and indirectly, who knowingly or unknowingly influenced this book to become a reality to tell us where we are coming from, where we are and where we are going”.

“Most importantly, I would like to point out a group of people who-without their perseverance and endurance there would not have been any story to tell and I specially acknowledge and thank them for their contributions, who despite the lack of availability of social services and physical infrastructure remained in peace and harmony. Nigerians are said to be very resilient and I am positive that the labours of the Cocoa farmers in Eti-Oni shall not be in vain and together we will continue to forge ahead to achieve our dreams of a beautiful Eti-Oni and subsequently the whole of Nigeria for everyone.”

“Just over 3 years ago, I met someone who today has become a good friend and by our second meeting said he could see a book or more in me and that I needed to write a book which I smiled away but by the third meeting, said if I didn’t want to write the book, he could be a co-author to help out and of cause when I finally decided to put this book together, I was pleased when Professor the Lord Alton of Liverpool agreed to write the Foreword which I really appreciate as well as his friendship. He is always looking out for us and ready to introduce me to anyone he felt could support our vision to becoming a reality.”

“To have a Cocoa heritage is different from being in Cocoa Trade or business and one of my first major contacts with the cocoa industry that made a positive impact was my meeting Mr Dimeji Owofemi who had been trading Cocoa beans for over 20 years and had just commissioned the largest Cocoa processing facility in Nigeria. We developed a relationship that gave me an insight to the value-add aspect of the business with an interest in expanding production capacity but in a manner that will properly define us for quality.”