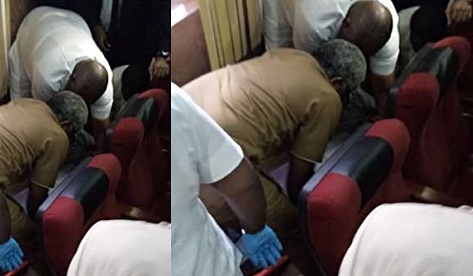 The former national publicity secretary of the Peoples Democratic Party (PDP) Olisa Metuh has collapsed during his resumed trial in an Abuja High Court on Monday.

He was trying to make his way to the dock when he suddenly collapsed.

The trial judge, Justice Okon Abang, asked the court officials to explain what happened. The officials informed the court that when the case was called, Metuh was making his way to the dock when they all heard a loud noise and noticed the defendant on the floor.

The trial judge continued with the trial even though Metuh was still on the floor.

However, Metuh’s counsel, Emeka Etiaba in disapproval withdrew from the trial. He said he cannot go ahead with the trial when his client is lying on the floor.

He noted that his client is obviously ill and has been confirmed by the medical personnel of the court.

Justice Abang, however, insisted that Metuh’s counsel call his eleventh witness in the trial. The witness then came into the dock.

His trial earlier witnessed a dramatic turn on Monday, February 5, 2018 when he appeared at the Federal High Court in Abuja on a stretcher, days after the trial judge ordered him to show up or face the risk of forfeiting his bail